In a heady stretch of six matches between January 16th and February 12th, Raul Meireles scored all five of his Liverpool goals. When the goals started to dry up, some began to wonder just how important he was to the team's continued success—especially given the way everybody else in the side seemed to be clicking as Liverpool flourished with an up-tempo pass and move game and the goals poured in against everyone from City to Fulham to Birmingham to Newcastle. Then, injury forced him to miss Liverpool's final home game of the season versus Tottenham. And the results weren't pretty. Which seems as good a place as any to start working back around to the point of the matter: 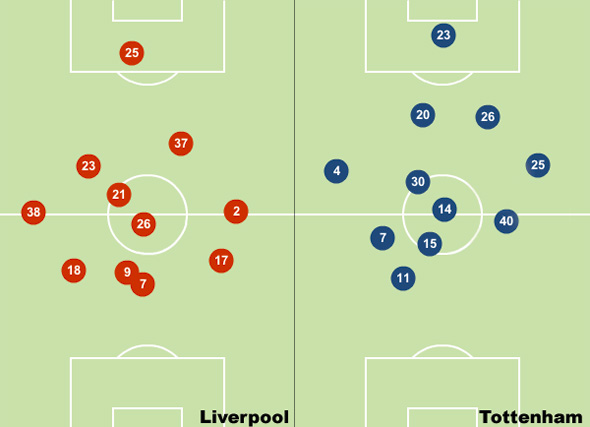 When you look at data from a football match after the fact, some possible impressions will be false positives, artifacts of natural player movement rather than signs of meaningful tactical intent. For example, in the above maps that show average player position from Sunday's Liverpool-Tottenham game, Tottenham's overall shape would appear to most closely resemble a 4-2-3-1, with Modric (14) and Sandro (30) in the center of the midfield, Piennar (40) and Lennon (7) tucking inside in more attacking areas, and van der Vaart (11) the lone central striker.

Of course, that would then leave Crouch (15) as something like the central attacking midfielder that system calls for, the third man in a midfield trio, which to anybody watching the match—or even for anybody who simply had any awareness of Peter Crouch as a player or his role in Harry Redknapp's Tottenham—was obviously not the case. However, that his movement to link play and win headers has him so clearly positioned behind van der Vaart does suggest one important thing that isn't a mirage: Rafael van der Vaart was not, as many people might have assumed given Tottenham's general dominance for much of the game, plying as a de facto third midfielder to give Spurs a numerical advantage in that area. Tottenham only played the match with two men in the middle, and yet for the first time in recent memory the pairing of Lucas and Spearing was comprehensively outplayed in a match in which they were not outnumbered.

In any case, given that Lucas and Spearing appeared to be overwhelemed by their Tottenham counterparts during the match, the positional maps do raise the question of why Liverpool didn't change its shape to counter Spurs' dominance. With four players in a largely attacking forward band of Kuyt (18), Carroll (9), Suarez (7), and Maxi (17), Liverpool arguably had an extra attacker that could have been removed to help in the midfield battle, especially seeing as these maps represent movement across the entire match and not just towards the end when Liverpool was all out in attack while Tottenham looked to ride their two goal cushion to three points. There can at times be a natural inclination to link "more strikers" to "more attacking," but Liverpool for much of the match played in something of a 4-2-4, and the resulting drop from the heady pass and move football seen against the likes of Fulham and Birmingham in recent weeks showed just what happens to a previously effective attack when the team loses the ability to effectively build a base for that attack. With Meireles in the lineup instead of Carroll in those two games, the entire shape and approach of the team changed, and as a sequence of matches the contrast once again showed that the most important aspect in determining effectiveness in attack may in fact be the ability to control and build play in midfield: 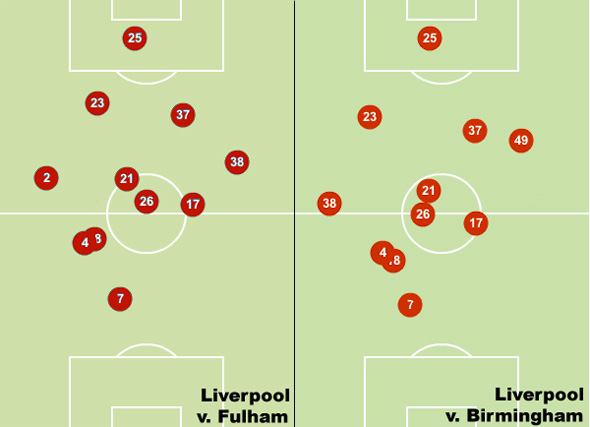 As seen in the positional map against Fulham, Liverpool played that game with Maxi tucked in far closer to the midfield in support. Meireles and Kuyt then appear to have taken up virtually the same position on the right, which in this case is a graphical representation of their frequent position swapping in that game—though whichever player was taking up a role in midfield at any given moment was also closer to the central midfield pair than against Tottenham. Meanwhile in Liverpool's 5-0 hammering of Birmingham, something very similar to the Fulham match can be seen in the team shape—again there is flexibility in attack and midfield support provided by Kuyt and Meireles on the right; and again Maxi takes up an extremely tucked-in position on the left to directly support midfield. In fact, aside from Jack Robinson (49) appearing much more reserved in his role at fullback than either Flanagan (38) or Johnson (2), they're essentially the same formation and approach to both matches, matches where Liverpool sought to impose their style of play on the opponent instead of setting up passively to react to whatever was thrown at them.

And if some impressions are false, tricks of the mind as it tries to impose order on a series of coloured dots that represent overall player movement and average position, some others are true. One obvious example that can be seen when comparing the way Liverpool set out against Tottenham to Fulham or Birmingham is Raul Meireles' importance to this Liverpool side for the movement he brings to the right of midfield and attack in his interchanges with Dirk Kuyt. Another is that, however you get it, having an extra man in midfield helps the passing game. It doesn't especially matter if it's a forward dropping back or a wide midfielder moving almost entirely inside, because either way, being down an attacker or exceptionally narrow on one side of the pitch can be a far easier shortcoming to overcome than not having that advantage in midfield. Then there's the Andy Carroll factor, which in its own way is fairly obvious when one looks at how the team approached the game in two matches he wasn't involved in compared to the most recent one he was. Liverpool's fluid display against Manchester City with him in the lineup may have shown it was possible for them to play a slick, pass and move game with him in the team, but in a lot of ways Tottenham was a regression to the mean that reminds just how much work needs to be done over the summer both on Carroll as a player looking to further develop his skills and also on the team as it attempts to find a way to function properly around him.

Of course, bringing in Andy Carroll and leaving out Raul Meireles was a change forced by injury, but contrasting the way the squad has set up recently with the results does help to make clear just how important Meireles has been to Liverpool's recent form. Certainly his own goal scoring form has cooled since its mid-winter peak, and once players stop scoring every second time they touch the ball it can at times become easy to overlook their less obvious contributions. His forced exclusion against Tottenham, though, both in how it effected Liverpool's shape as well as in how it quite obviously effected their overall performance in the match itself, speaks to just how important he has been to Liverpool in recent weeks even when he hasn't been scoring.

To hijack an old cliche, sometimes in football it can be a case of not knowing how much you'll miss someone until they're gone, and on Sunday Liverpool really missed Raul Meireles.