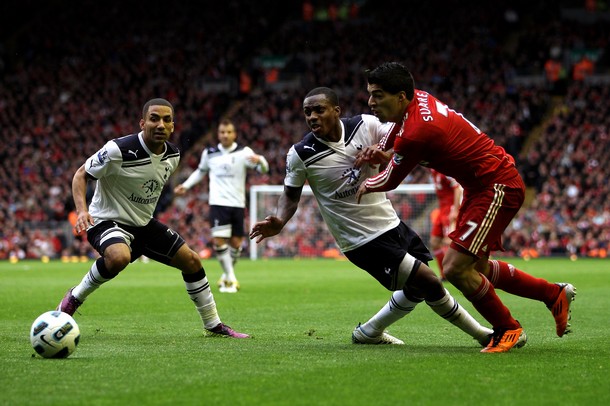 Spurs come away with a deserved win over a less than impressive Liverpool.

For all the pre-match talk about the big occasion and Liverpool capping their resurgence by cementing a European place, this one turned out to be as much about looking to next season as it was about finishing off this one. As the final whistle drew near, it seemed like there was a general sentiment that, while it would have been nice to see everything go right on the pitch during Liverpool's last home match and the first after Kenny Dalglish's contract agreement, there's still been plenty to celebrate in the recovery of a season that seemed like it was beyond repair. Disappointing, yes, but a whole lot to look forward to.

With Andy Carroll returning to the starting lineup and Raul Meireles exiting, the hope was that we saw more cohesion moving forward and the development of a partnership that's going to drive Liverpool forward for years to come. Luis Suarez had been on top form coming in, and getting Carrol back in the lineup would allow for the January arrivals to get a jump-start on next year's campaign.

It was Spurs who came out of the gates with more urgency, though, and they were dominant in the opening minutes. Liverpool's been at their worst this season both home and away when the opposition sets the tone, and today was another clear example of the type of passive play we've come to loathe. For Spurs it meant a goal inside of ten minutes; their fifth set piece in the Liverpool area was finally converted by Rafael Van der Vaart, as his deflected effort spun over the head of Pepe Reina and into the far corner. A deserved lead for the guests and a worrying start for Liverpool, who we'd all expected would continue their form from Monday's spectacular win over Fulham.

Spurs gradually relinquished control and Liverpool grew into the match as the half progressed, but they never really hit top gear and looked more than a little disjointed getting forward. It was frustrating to watch and, as we saw in the 20th minute, apparently frustrating to be a part of, as Luis Suarez was booked for putting a boot to Michael Dawson after the central defender hit the deck without much help and lashed an arm out at the Uruguayan.

The frustration continued until the 35th minute when Liverpool finally had their first real chance of the match through Jay Spearing, who dragged a left-footed shot well wide. They had another chance four minutes later, as some good work from Martin Skrtel on the right left Andy Carroll with a clear header at goal, but his effort ballooned over as Carlo Cudicini scrambled to get back in front of goal. Carroll was again involved in the last chance of the half, after the foul he drew led to a free kick for Luis Suarez just outside the penalty area. Suarez curled it past the near post, though, and Liverpool ended the half without a lead for the first time in four matches.

I think we all expected that Liverpool would come storming out of the gates in the second half, so it was plenty concerning that we didn't get anything close to it, and the problems were magnified when Spurs added to their lead ten minutes after the restart. Steven Pienaar and John Flanagan closed down on one another on the left edge of the Liverpool penalty area and, just before entering the box, clattered shoulder-to-shoulder and hit the turf. It looked like the contact was shared and initiated outside the area, but, in a turn of events that Liverpool supporters are all too familiar with, Howard Webb wrongly awarded a penalty. Luka Modric sent Pepe Reina the wrong way, Spurs had their second, and as long as Liverpool continued to stumble, the match was out of reach.

And that unfortunately proved to be the case, with Liverpool unable to put much of anything together for the remaining forty-odd minutes. Jonjo Shelvey's introduction livened things up for the first few minutes he was on the pitch, but Spurs' defense turned Liverpool away anytime they started to look threatening and had little trouble containing an attack that scored 13 goals in their past three matches.

It's easy to point to the addition of Andy Carroll as the main problem for Liverpool today, and while I think there's credence to it, the absence of Raul Meireles looked to be much more impactful. The Portuguese midfielder has been a mainstay in the starting eleven and been one of Liverpool's most consistent performers, and when Liverpool are at their best Meireles often has a part to play. His constant movement and distribution were sorely missed today, and I think the impotence of Carroll, Luis Suarez, and Dirk Kuyt up front were indicative of that. The front men weren't alone in their struggles, though, as we saw Lucas and Jay Spearing lose the midfield battle to Luka Modric and Sandro, and little to speak of at the back.

Today went just about the opposite of what we'd hoped for, and if today was supposed to be a celebration of the massive turnaround that Liverpool's experienced in the past four months, it's got to be seen as a disappointment. What we saw today, though, is still a part of that turnaround, and it doesn't erase any of the positives of recent weeks or Liverpool's Europa League hopes. It does, however, provide a stark reminder that this summer is a tremendously important time for the squad.

One match left and still something to play for, and, regardless of today's result and whether or not they get the help they need from Birmingham, Liverpool will finish this season having restored our belief that better days are on the horizon.