Reina Staying For Real, Players' Reactions, and Other Friday Notes

Share All sharing options for: Reina Staying For Real, Players' Reactions, and Other Friday Notes 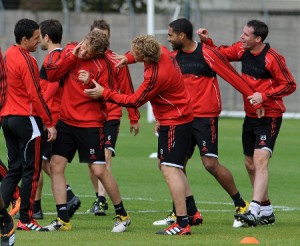 There's some sort of ticklefighting epidemic breaking out at Melwood, and while typically I'm all for anything tickle fight related, today I just think it's...okay, nevermind, the prospect of getting tickled by Pepe Reina is enough to brighten even the darkest of days. You know, in a strictly pleutonic, we can still respect each other tomorrow type of way. What's noticeably absent, though, is anyone tripping over themselves in a rush to tickle Sotirios Kyrgikaos, who likely doesn't recognize "tickle" as a verb and would most certainly need the type of tickle that only Ash can provide. Even then, I don't like their chances.

With that cleared up, Friday's news and notes:

* Late last week we heard second-hand confirmation from Guillem Balague that Pepe Reina would be at Anfield next season, and while it's nice to get that sort of news from a well-respected journalist, nothing can really replace the real thing. And so, fresh on the heels of the signing of three-year deals for Kenny Dalglish and Steve Clarke, we finally hear from Pepe Reina:

"I am looking forward to next season. I have always said [that] – of course there was a bit of doubt back in December and January because we were not even close to where we are now. We have had excellent news on Kenny's contract, Steve Clarke's [who also signed a three-year deal as first-team coach] and all of the technical staff. We are heading in the right direction and we are optimistic.

"I think by making the right steps and taking them, we can all see the difference between now and then. That's why we are now optimistic about the future and are looking forward. We have to be calm because we know how hard it is to compete with the big teams out there. Fifth position is not the one that belongs to Liverpool, we aim higher and hopefully next season we can finish higher.

"We are all looking forward to next season, but we have to finish the job on Sunday. By winning we will mathematically be sure of fifth and that is our target – to beat Tottenham, make sure we get into Europe for next season and then get some rest, which I think we deserve as well."

Not only confirmation of the good that we already knew, but also that the club were close to losing him as well during the dark days of December. There's always a bit of back-and-forth for me when we talk about players thinking of leaving; I can get to the "fine, piss off" place pretty quickly, but at times I'm prone to be a bit more understanding of the number of variables (most of which I'll never know) that factor into the decision-making process. And, given the state of things in December, I don't know that anything can be held against Pepe Reina or Fernando Torres or anyone else for having thought about some brighter possibilities.

But he's here, and it sounds like he's here to stay for the long haul, and that's good news from any angle. Unless he ends up at Chelsea next January, which would be decidedly bad news.

* We were bound to hear from the squad's more prominent players after yesterday's news, and with Dirk Kuyt, Steven Gerrard, and Luis Suarez in Dublin to appear at the opening of a Lifestyle Sports shop, it was the perfect opportunity to get their thoughts on the appointments of Dalglish and Clarke:

Kuyt: "It is very positive and also well deserved. The whole team, including the manager and his assistants, are working really hard to progress and I think everybody can see we've done that so far.

Suarez: “It is great news because everyone is very happy with him. He has worked very hard with us and our relationship with him is great. It has been great over the last couple of months. Kenny has given me all my confidence. He trusts me."

Nice sentiment aside, one of the notable pieces in the extended parts of almost all the interviews done yesterday was the constant references to bringing in players in the summer. We all know it's coming in some shape or form, and apparently the players are also well aware, which makes their late season form that much more impressive. Liverpool have an understrength and frighteningly thin squad composed mostly of players that might be on the way out, and yet they're playing their best football of the year.

And to riff on that tangent briefly, I've heard the "no pressure" argument; basically Liverpool were such shit earlier in the year that they had no place to go but up, and it's all gravy at this point. Which I get, but had they continued to struggle, we would have heard the narrative that Liverpool crumbled under the enormous pressure of expectation and what a shambles and etc. Which is to say, everyone who disagrees with me is wrong. Liverpool have done some of their best work this when under pressure and faltered when not, so if anything it's a matter off finding a way to be successful when there's less focus on the squad. Or, Martin Samuel and Henry Winter are always right, and Roy Hodgson should be your child's godfather.

And just a reminder in case it's not already rattling around amongst your mind grapes that we're welcoming guest submissions for posts starting in the next few weeks. Noel outlined our intent the other day, but basically we're looking to capitalize on the fact that our little community has some of the more thoughtful and clever commenters around. If you're so inclined, send us an email at liverpool[at]theoffside[dot]com to let us know you're interested. There's really no guidelines, and we'll likely be supportive of whatever sort of idea you come up with, particularly during the lean summer months.

In the meantime, you can reflect on the possibility that maybe ol' Jack Burton has what it takes to win a tickle fight with the Greek...