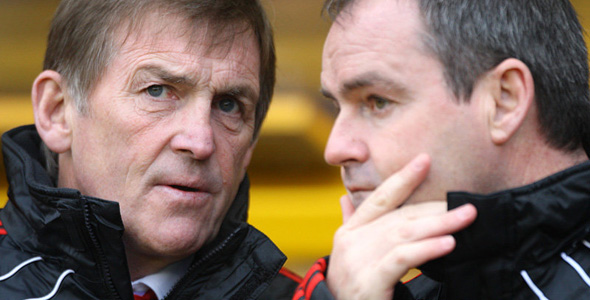 Just about everybody following Liverpool knew all along that it was only a matter of time; that there was nothing to worry about and John Henry and Fenway Sports Group were only waiting for the right moment. To most it was clear that the insistence by the press that he be called "caretaker" while they cried about it being a horrible injustice he hadn't signed on full time yet was little but an attempt to sell a controversy that didn't really exist. Still, that doesn't make it any less of a big deal that Kenny Dalglish actually has signed that contract now, putting pen to paper to officially come on board as manager of his club for the next three seasons.

Also of note is that Steve Clarke has today joined Dalglish in coming on board for three years, settling the club's coaching situation moving forward in a way it would be hard to imagine any fan not being thrilled by, and over on LFCtv John Henry took the chance to talk about the new deals for the club's manager and first team coach:

Kenny is a legendary Liverpool figure both as a supremely gifted footballer and successful manager. Since returning in January he has shown extraordinary leadership and the ability to bring the best out of so many people associated with the Club. It was obvious to us very early on that the atmosphere surrounding the Club had been transformed by his presence. No one else could have produced such a response. Therefore, I'm delighted we have agreed to a new contract. We didn't need nor want to look elsewhere for the right man to manage the team.

Working closely with him, we've seen first-hand his love for the Club and his determination to do whatever is necessary to produce a winning side again. He has a unique relationship with our supporters and embodies everything that is special about the Liverpool way of doing things. Liverpool enjoys a global standing within the sport, but having Kenny in the dug-out will help us in our efforts to bring the best available talent to the Club as we continue to move the club forward.

I'm also pleased we have reached an agreement with Steve Clarke, as his contribution to Kenny's backroom team has been significant over the past four months.

And really, what more is there to say than that? Kenny Dalglish has signed on, and maybe we all knew it was coming, and perhaps there's room for some part of the mind to recognise the smart timing ahead of a match against Spurs that will decide European qualification and is the final home game of the season. But at the end of the day, it's a time for Liverpool fans everywhere to feel a little bit of joy for the King's official long-term return. So too is it one more significant moment that marks a separation between this new Liverpool Football Club and the one of Hicks and Gillett and Hodsgon and Purslow, of sit-ins on the Kop and viral videos and fears of relegation, administration, and a slow and painful death to the club beloved of so many.

It's great to have the King back for good, even if everybody was fairly certain it was only a matter of time. It's also amazing how far not only Kenny Dalglish has taken the club on the pitch, but how far things have come in so little time on almost every level. It hardly seems fair to have to wait out a summer transfer window now to get to the next chapter.