Liverpool 3, Newcastle 0: Up to Fifth. Wait, What?

Share All sharing options for: Liverpool 3, Newcastle 0: Up to Fifth. Wait, What? 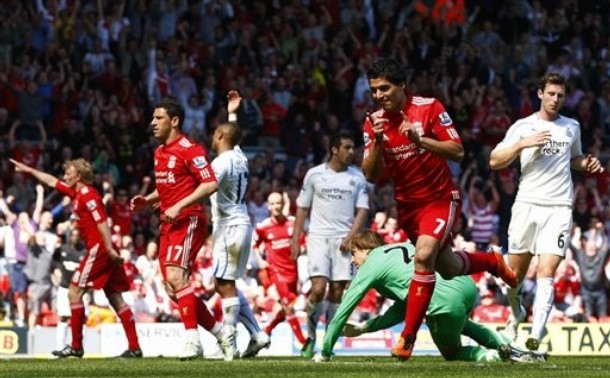 Liverpool eventually cruise to a 3-0 win over Newcastle at Anfield.

After Liverpool lost 3-1 at St. James' Park on December 11th, they sat ninth in the table with a -1 goal differential. It certainly wasn't the low point of the season, which was yet to come, but it was a feeble display as part of what had become a troubling trend in Roy Hodgson's time at the helm. Yes, they had eased past Aston Villa five days earlier, and won in similar style against West Ham, but the loss to Newcastle was yet another indicator that Hodgson's Liverpool lacked any sort of grit, determination, or belief.

So today, as Liverpool get through a difficult opening forty-five minutes and eventually wear down a tough Newcastle side to place themselves firmly in the conversation for European football, the dissonance is almost too much. Plus-fifteen on goal differential, winners of five of seven in league, and getting results even when it doesn't seem like they're playing that well. It's been a long, strange ride, but Liverpool are finally playing the type of football we'd opened the season hoping for.

The opening was, in terms of recent home displays, simply status quo. Kenny Dalglish opted to leave Andy Carroll on the bench, which meant that Maxi Rodriguez again featured on the left side of a midfield four, with Luis Suarez and Dirk Kuyt partnering up front. It wasn't quite the same tactics we saw last week when an almost carbon-copy eleven (with only Glen Johnson coming into the side in place of Jack Robinson) completely destroyed Birmingham---today we got something more similar to a 4-2-2-2 with Raul Meireles and Maxi wide, and Lucas and Jay Spearing deeper centrally.

Despite the tactical adjustment Liverpool it was a familiar sight less than ten minutes from kickoff, with Maxi volleying home a deflected effort to open the scoring. John Flanagan's dangerous cross was narrowly missed by Luis Suarez and headed away by Mike Williamson, but only as far as the Argentine midfielder on the edge of the area, whose volley took a deflection off Danny Simpson and flew past the helpless Tim Krul.

From there it was easy to expect that things would progress in a fashion not unlike last week, but we ended up getting the exact opposite. Liverpool sank back, Luis Suarez became almost completely isolated, and Newcastle were in control for the rest of the half. The visitors had plenty of chances to create, mostly through set pieces and the annoying Jonas on the left, and the Liverpool of last week seemed like a distant memory.

Thankfully Newcastle were lacking any sort of final ball, and after Joey Barton's side-footed effort flew wide in the opening seconds of the second half, they completely disappeared from the match. Liverpool gradually took control of the match, aided by decision to swap Johnson and the yellow-carded Flanagan at the back, which almost immediately negated Jonas and took away none of the threat created by the fullbacks. Liverpool's resurgence was also aided by the reappearance of Luis Suarez, who started to find his legs after a disappointing first half and, along with Pepe Reina, was at the heart of Liverpool's second.

In recent weeks we've seen Reina return to the role of creator, and his clearance in the 57th minute released Suarez down the left. The Uruguayan got around Williamson and into the penalty area, and on the way in Williamson tugged at the forward's shoulder. Suarez might have made the most of it, but I think the penalty was the right call, and it was a chance to Liverpool to get the second they needed. Dirk Kuyt stepped to the spot and made it a perfect eight for eight on the year, and Liverpool were on their way.

Suarez got a goal of his own shortly after, when his pass in tight space just outside the box fell to Kuyt, who nicked it through a sea of ball-watching defenders towards the center of the area. Suarez had broken almost immediately after releasing his pass, and Kuyt's ball fell perfectly for him to slot past Krul. I hadn't realized it had been so long since his last goal, which was the stunning goal at Sunderland back in mid-March. Today it was a just reward for what evolved into another excellent performance up front.

It was very comfortable from there, with Newcastle clearly folding and Dalglish opting to ring in the usual batch of changes. Andy Carroll got the appearance against his former club everyone had been talking about, but it was of minimal influence at best. Jonjo Shelvey and Joe Cole again made their late-match cameos, with the former coming on for John Flanagan at left back and the latter managing what looked like a full sprint after coming on for Suarez.

While it didn't start as pretty as last week's win over Birmingham, it ended up being nearly as comfortable. The play at the back continues to excel; Pepe Reina couldn't be bothered (and I don't think he was) and chipped in on the Kuyt penalty, and Glen Johnson was very good in his surprise return to the squad. Flanagan struggled in bursts early but recovered and played well with a booking, and Jamie Carragher and Martin Skrtel were effective when called upon.

The front six had most of the struggles in the opening half, but they eventually righted the wrongs of the first forty-five, led by the improved play of Suarez. It was another great display from Lucas and Jay Spearing in the middle as well, though, and I thought Spearing in particular was impressive. Not the smoothest day for Raul Meireles, but he seemed to grow into the match as it progressed, and Maxi got another goal to go with another solid performance. The work of Kuyt again impressed, and his coolly taken penalty gave Liverpool the second goal they needed before the classy and dangerous Suarez killed the match off.

It really is hard to believe where Liverpool end the day, but you can't say they're undeserving. They've sparkled under Kenny Dalglish and Steve Clarke, and regardless of how this season ends, they've worked themselves back into relevance after coming dangerously close to falling off the map.

From the agony of being a Liverpool supporter in December to the sheer joy of watching them play football in May, it's been an unbelievable season. Let's just hope they've got enough left in the tank to keep us smiling.