Everyone Who's Anyone is Injured and Other Wednesday Notes

Share All sharing options for: Everyone Who's Anyone is Injured and Other Wednesday Notes 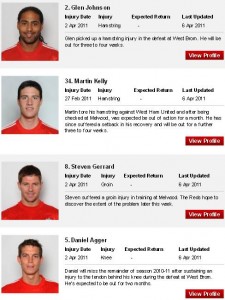 The word "depth" is entirely unavoidable these days when it comes to Liverpool---I used it in hilarious fashion three times in the opening sentence of the loanee watch post earlier in the day, and it was largely the impetus to actually spend the time to piece that together. It's also been a topic of increased discussion in the past few days for Damien Comolli, which we discussed Tuesday, and John Henry, who spoke of his surprise at the squad's lack of depth in an interview with Four Four Two magazine.

With twelve players on loan and a few that are not good/out of favor, one of the only ways that the current squad can have anything resembling depth is to have some semblance of collective fitness. I thought that's what we were getting as the international break rounded up, with no new knocks picked up during the two weeks, Steven Gerrard, Jonjo Shelvey and Fabio Aurelio working their way back, and a chance to rest and rehab for all the others who stuck around Melwood.

As with most things in life, I turned out to be horribly, horribly wrong.

* Confirmation came from the club today that Daniel Agger will be out for the year with a "problem in the tendon behind his knee" that will require a minimum of two months' rehabilitation. No need to expound on the impact that this has on Liverpool---when he's been fit this season he's been Liverpool's most solid defender by a long shot, and he's capable of completely altering the dynamic of the side both at the back and moving forward. His luck has been Aurelioesque, however, and it's another setback for a player that seems destined to struggle with fitness for the rest of his career. Talk of moving him along might be a little premature, but there's no doubt that, as much as it pains me to say, he can't be someone that Liverpool builds around at the back.

The news somehow continues to get worse, as the club also confirmed that Glen Johnson will miss 3-4 weeks with the hamstring strain he picked up ten minutes before Agger limped off against West Brom, as well as more unknowns about the prognosis for Steven Gerrard. With Martin Kelly on roughly the same timeline now as Johnson, that leaves the fitness situation in defense at Threat Level Midnight:

With Fabio Aurelio always somewhat of a stretch for a full match, it's far more likely that we see another set of four central defenders against Manchester City on Monday, which is all sorts of terrible.

* Something that's not so terrible is that Andy Carroll's at least managed to stay relatively healthy while working his way back to match fitness, even if he was mostly used as target practice for Liverpool's hoofing brigade on Saturday. He's convinced there's more to his game than that, though, and hopefully the back line is listening:

"There's more to me than that. I'd like to think I create a lot of goals and chances. I work hard, I'm not selfish in front of goal, and if someone is in a better position I'm happy to pass."

There's plenty more to the interview with Four Four Two via the link above, but one of the main issues most of us had on Saturday focused on this exact topic. Even with a center forward who's a monster in the air, lofted, ranging balls from deep in their own half did Liverpool no favors. They certainly weren't aided by the lack of a defender who doesn't like he's about to shit himself in possession, but that doesn't have to make playing it out from the back impossible. Liverpool's been at their best when they actually play football, and Andy Carroll's presence doesn't need to change that.

* We're not typically in the business of rumors, and "Sky Sports understands..." is tantamount to rumor, but news about a pre-contract agreement with French winger Sylvain Marveaux has been floating around in more than a few places today. There's been a link with the midfielder since at least December, and now it's looking like he'll arrive on a Bosman free at season's end. For those unfamiliar with Marveaux, there's an excellent post via nate from Oh You Beauty's Twitter breaking his game down. It's an insightful read, even if I blacked out when I read the introduction and saw "injury-plagued."

As with everything that's been refreshingly different in the past few months, we likely won't hear anything from the club until there's actually something to report. For now, I guess all that's left to do is watch a short YouTube compilation:

That's all for today, and Noel will be back tomorrow to take us through to Saturday. Like yesterday, there's some decent-enough football to watch this afternoon and evening, so enjoy that if you're so inclined. If not, you've always got the booze.