Checking In with Liverpool's Loanees

Share All sharing options for: Checking In with Liverpool's Loanees 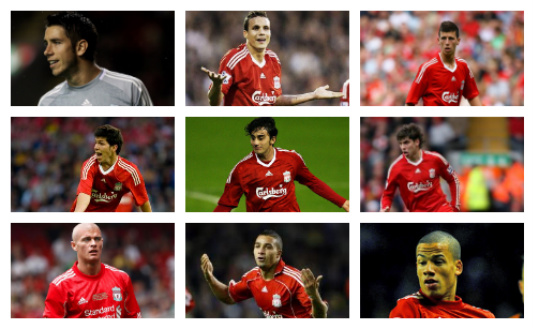 If you're still around after that opening, I've failed. But we might as well do this anyhow, as there's room somewhere during a longish week to waste time with things we should probably do from time to time.

And, as a brief disclaimer, reliable statistics for player performances in the lower leagues and abroad aren't always the easiest to come by, so if you've got something more accurate than what you see in the post, please let me know in the least snarky way possible.

The Australian goalkeeper joined Championship side Derby County on an emergency loan deal that started on March 24th and will extend until the end of the season. The Rams were suddenly without Matt Duke (Hull City) and Frank Fielding (Blackburn), and Jones was presented with the opportunity to get more consistent first-team experience. He made his debut on Saturday against third-place Cardiff City in a 4-1 loss. With Peter Gulacsi back from his own loan spell (Tranmere Rovers) in December and moving into the backup role, it'll be nice for Jones to get regular match time in goal.

Roy Hodgson's pet project faded quickly at Liverpool and is less preferred than an out of position Glen Johnson, an injured Fabio Aurelio, an injured and out of position Daniel Agger, an out of position Danny Wilson, and U18/Reserve squad regular Jack Robnison. But he's found regular playing time in the Championship with Nottingham Forest, who find themselves three points off the playoff pace. Konchesky's made ten starts since joining up at the end of the January window and scored a goal in the 2-2 draw with Preston North End. Also, he found himself terribly out of position on Fabio Borini's first goal in the 3-2 loss to Swansea in mid-March (notice the excellent pitch awareness at :05), which wasn't really that shocking. Easy money is on a permanent exit, possibly to West Brom, at season's end.

Along with Alberto Aquilani and (more recently) Emiliano Insua, Dani Pacheco is likely the loanee that folks are paying the most attention to. Most early-season forecasts had Pacheco finally making a splash with the first team at the start of the season, but as it's become increasingly clear that something doesn't fit right now, the young Spaniard headed off to Norwich on March 24th, the same day Brad Jones headed to Derby. It should be a great situation for him---the Canaries are fighting to hold on to the second spot in the Championship and automatic promotion. He made an impressive debut against the unfortunate Scunthorpe, chronicled here by MilanKakaBaros, and should get a taste of something a bit more competitive this Saturday against Swansea.

Stephen Darby's been kicking around the fringes of the first-team for a few years now, with a handful of appearances each of the last two seasons, but he's due to spend the entire season at relegation-threatened Notts County in League One after his initial loan spell was renewed in January. He's featured in 24 matches all told, 15 of which have come after the renewal.

There's plenty to hear about Nathan Eccleston's time at League One side Charlton Athletic, but most of it's from him, as he's always sure to tweet his impressions of how manager Chris Powell could be using him better. As of March 29th, Eccleston had his statistics as "4 subs 1 goal 4 starts 1 goal 3 assist then dropped for 1 poor game which I still managed to get a assist come on play well don't start :s" So some proven influence in attack and a fabulously Ryan Babel tinged trajectory in social media; in total he's seen action in 16 matches, making five starts, scoring twice and notching two assists.

Like Darby, we've been able to get a few glimpses of Dani Ayala in the Liverpool first team, with the Spanish defender making five appearances with the senior squad in 2009-2010. He started the 2010-2011 campaign on loan with Hull, where he started 12 matches before an injury forced him back to Liverpool earlier than planned. He made the move to Derby a bit later than expected, but since joining the club in early February he's started 9 of 10 matches. Even with the inconsistencies in the first team it's hard to tell how he fits into Liverpool's future, so hopefully there's something that can be taken from his time away this season.

After making a start against Rabotnicki---remember, the side against whom Joe Cole made Messi look like Messi when compared to Joe Cole---and spending most of the season in the reserves, Amoo was sent to Milton Keynes in January. That loaned was not-so-generously termed "unsuccessful" by Milton Keynes, and the young forward returned to Liverpool after less than a month away and only three appearances. The club was able to work out another deal with Hull City, and since joining on the last day of February, Amoo has made four substitute appearances.

By far this has been the most talked-about loan deal of the season, from its failed beginnings to the continued success that Alberto Aquilani's experienced back in Italy. In the past few days he's apparently asserted his desire to stay with Juventus, which came a week or so after asserting his willingness to return to Liverpool. I think he's the most likely of the loanees to come into the first team and make a discernible impact, as we saw towards the end of last season, but opinions seem to be split as to whether or not he'd actually be wanted back. He's played in 27 matches for the club this season and been one of their more consistent players, and it's likely that some sort of anticlimactic ending is on the cards from a Liverpool perspective.

VfB Stuttgart and Liverpool agreed a loan deal for Degen back in August, and after featuring somewhat regularly in the fall, the oft-injured Swiss defender hasn't made an appearance since December. Likely another face that, if things go according to some sort of plan that I'm guessing exists, will be making a permanent move somewhere else in the summer.

Like Degen, Nabil El Zhar was part of a loan deal struck before the closing of the summer window, and he was one of a few Liverpool players to head to Greece. El Zhar landed at PAOK, where he's become a squad regular after making his debut in November. The winger has scored one goal in 25 appearances.

As I mentioned above, Emiliano Insua has become an increased topic of conversation as the concerns grow about the fact that Liverpool don't actually have an established/healthy fullback in the squad. His time at Galatasaray, which started in August, has seen three different managers and a host of different philosophies, the latter of whom has left him feeling good vibrations. Oh. As for the football, the Argentine has made 12 appearances and looks to have found it difficult to break into the first team on a consistent basis. Bit odd considering that at current, most of us are clamoring at the possibility that he can return and become an immediate starter.

Of all players on loan, information on Chris Mavinga's the most difficult to get information on, as the Belgian League doesn't seem to carry much of an internet following outside of...Belgium. Looks like he's made a few appearances, but outside of that he's most memorable for being one of the first Roy Hodgson doubters.

All told, it's twelve players, most of whom won't have much impact on the first team for some time. In the cases of Aquilani and Insua, though, there's a more immediate discussion that needs to take place. Both can, at the very least, fill in where needed, and it'd be fair to say that both could contend for a starting place at current. But most likely, as with everything else, we'll have to wait and see.