Absence Makes the Heart Grow Xabier and Other Tuesday Notes

Share All sharing options for: Absence Makes the Heart Grow Xabier and Other Tuesday Notes 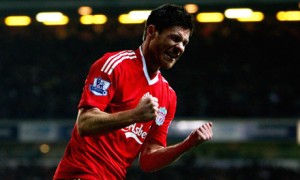 With it being entirely obvious that all Spaniards are leaving Liverpool, at least in the gospel according to the People, sometimes it's nice to be able to reflect on departures that weren't so painful. Ones that didn't involve sinking ships, mutual consent, or alice bands of a distinctly different shade.

We first heard from Alvaro Arbeloa, he of pile-jumping, FIFA-playing, "aw shucks" spouting fame. And now, as though you weren't already emotionally vulnerable enough after Saturday...

* Xabi Alonso speaks of his love for Liverpool and the hopes he has to transmit this love to his son in an interview with Tony Barrett from the Times. For those of you who have a subscription, the full article is available now over at the Times website. For those of you like me---poor, down on your luck, yet still handsome as ever---without a subscription, the official site has the excerpt to make you swoon:

"I am still a Liverpool fan and will be forever, absolutely. The things that I have lived and the experiences I had during those five years are deep in my heart and the passion and respect I had for the club and its supporters are still the same. Hopefully I can transmit to my son what Liverpool Football Club means and how special it is, as he was born in the city and he will visit it in the future.

"I think they have regained their confidence and despite being knocked out of the Europa League (by Braga) their form in the Premier League has improved a lot. I think they can rebuild a competitive team, especially as it looks like there is now stability at the club again. Now they have to think about the sport side and create a plan for the following years."

Reading this obviously sent me into a nostalgic spiral that ended in an argument with my wife about naming our soon-to-be-born child "Xabi," which I lost. After the tears subsided and the compilations ended, I also thought about how long ago the 2008-2009 season, arguably his best with the club, seems. It really was a different side; one that, in hindsight, had very few holes in it and a surprising amount of depth in numbers and in quality.

And of course, I also thought about how regardless of the style of exit or the time that's passed since, Xabi Alonso seems to have a manner of conducting himself that strikes a perfect balance of personable and professional. He knew he wanted to leave (or was no longer preferred) and wasted no time in doing so, but has managed to remain a favorite of supporters and falls all over himself to be complementary of the time he spent at Liverpool. Even though he finally went to a big club. Go figure.

* In news that's less apt to make you weep, newly re-titled Director of Football Damien Comolli managed a sit-down with LFC Weekly. The interview was kindly swiped by one of the lecherous thieves at Sky Sports for our perusal, and it includes the Frenchman's thoughts on the aspirations of John Henry and the Fenway Sports Group:

"I share the fans' optimism because the owners said things when they arrived and stuck to their words in January. They have shown their commitment and their backing and everything they have said they will do, they have done.

"I never had any doubts about that but I think for the fans it has given them reassurance that the owners will stick to their words and that they are ambitious. When you talk to John Henry and ask him what his plans are for the club, the only thing he says is: 'I want to win'. When that's the starting point, everybody has to make sure that everything we do is geared in that direction. That's the bottom line."

I'll be curious to see when the time arrives that the skepticism Comolli mentions is completely washed away. I think those at the club and supporters alike have plenty of reason for caution, and there's an allowance on the side of the newly-arrived for the damage that the previous owners had done. But for me, the steps Henry and FSG have taken so far indicate exactly what Comolli's referencing---they're here to make the club successful, they're willing to extend themselves when they feel it's appropriate, and they're more than capable of following through.

All that being said, though, this summer is still going to be make-it or break-it time, with the general consensus more or less laid out by redtrev73 earlier in the day:

Well said man. A summer that sees Kelly, Agger and Jonno get fit and be joined by at least 2 quality defensive buddies and a world class wide-man will leave the magazine fully reloaded!!

But then alabamabob got a chubby and things got weird, so now I feel compelled to talk about Jonjo Shelvey.

* And it's good news, as the young midfielder made a return to action in the reserves' 3-1 loss at Villa Park yesterday evening. The hosts got goals from Marc Albrighton and Gary Gardner, and Toni Silva gave Liverpool their only goal of the night with a fine run and finish. Both sides had a decent blend of youth and experience, with Villa fielding Albrighton, Gardner, and Michael Bradley and Liverpool giving minutes to David Ngog, Suso, Andre Wisdom, and Shelvey.

There's also potentially good team news involving Fabio Aurelio, but when he's involved there's a certain amount of restraint required. He's rumored to be close to a return to action, which would obviously be of great benefit to Kenny Dalglish after a weekend that saw two successive left-backs hit the floor. There's also mention of call-ups to first-team training for John Flanagan and Jack Robinson, which, at this point, is the next logical option until the summer.

That's all the Liverpool news worth mustering for the day, unless you're heading to Twitter to get in an argument about why you're a better fan than someone else. In that case, good luck, and spoiler alert---you've probably got me beat by a long ways, but only because I shoot with this hand: