Pass and Move and the Andy Carroll Groove

Share All sharing options for: Pass and Move and the Andy Carroll Groove 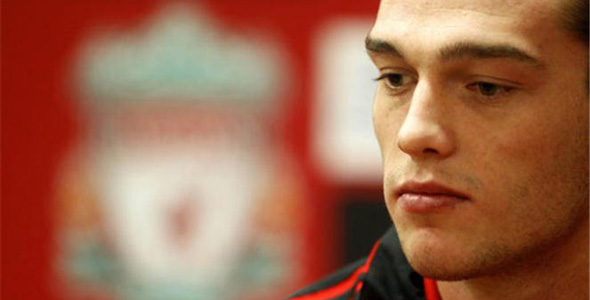 The recent match against Manchester City showed that Andy Carroll has it in him to be part of a Liverpool side looking to overpower opponents by keeping the ball on the pitch and playing pass and move football. That even after that display there was some expectation that Liverpool could manage better movement and a stronger passing game without Carroll in the lineup against Birmingham City only goes to show what an exception that City match was in the early days of Carroll's Liverpool career. And it only highlights the job Dalglish faces over the summer of figuring out a way to fully integrate the big target into Liverpool's longed for pass and move game.

In the four league matches he's played the majority of, plus the dull and dire home leg against Braga, Carroll's presence has often led to some of the year's worst displays of hoof-and-hope football. Sometimes, as against Arsenal on the road, this style of football is on some level understandable--and in some ways acceptable--for a squad considered underdogs. Yet when one compares it to the tough match against Manchester United that Carroll missed out on only a few weeks earlier, there's a stark difference. Obviously most will remember the United match for Suarez' movement, as well as for his apparent connection with Dirk Kuyt, something that has been obvious more often than not when the two former Eredivisie strikers have been paired. By comparison, it is the lack of any such movement and interplay in the final third that one most easily recalls of the Arsenal match, a game that was fairly dull until penalty drama well into stoppage time largely rewrote the narrative.

Beyond those obvious memories of players passing, moving, and generally causing havoc for their opponents as a result (or not), comparing the passing statistics for the entire team in the two big games (left) gives some insight into how Liverpool's style of play shifts when the big striker enters the fray.

Clearly, the single biggest difference is seen in where Liverpool's passes originated. Against United, nearly a full third of those pass attempts originated in the attacking third of the pitch and less than half originated in their own end. Simply put, there is far less hoofing, and that Liverpool more often brought the ball into the final third under possession or passed it in along the ground from midfield is at the root of the increased interplay between attackers in those forward areas.

Meanwhile against Arsenal, Liverpool attempted over half their passes from their own end and far fewer in the attacking areas, in doing so oftentimes conceding possession quickly and additionally helping to knock down Liverpool's possession numbers1 in the process.

Some would say that this is just the way things go against Arsenal, and there is some truth in that, but it's also how things tend to go for clubs facing United--including for Liverpool, whose opponents won the possession battle in both games. Despite that, when one compares the two matches there is a direct correlation between hopeful long balls, movement in the final third, and at least relative levels of possession and success that can clearly be seen.

Returning to those earlier, instinctive reactions to Liverpool's performances against United and Arsenal, the result of those two approaches becomes even more clear once hard statistics have been used to examine what has seemed obvious to most watching Liverpool in recent weeks. Namely that Liverpool is fond of the long ball when Carroll is in the lineup. And with the exception of Manchester City, that fondness has tended to make the side look less fluid and correspondingly less dangerous.

For anybody who thought the club looked more dangerous without Carroll in the lineup than with him, the numbers back up that gut-level disdain for the more agrarian style of football he seems to encourage. It's not a game most of the rest of the team is built for, and it's not a game that most Liverpool fans would want to see the rest of the team built for. Though luckily for Liverpool and its fans everywhere, that one dominant performance against Manchester City with him in the lineup does suggest he's capable of being more than a static target-man.

Over the remainder of the season and during the summer, then, Dalglish and the rest of the coaching staff will face the difficult task of ensuring that his full integration into the team sees that sort of approach to pass and move football become the rule rather than the exception when he's in the lineup. After all, the hoof-and-hope option isn't especially palatable on multiple levels, not least of which being that it's unlikely to lead to long-term success for a club aspiring to the top of the table.