Share All sharing options for: Liverpool 5, Birmingham City 0: With Ease 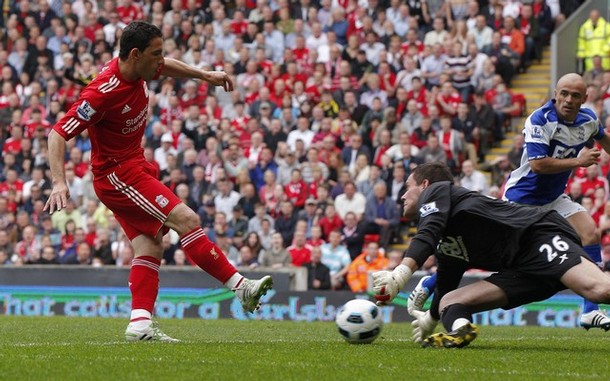 Liverpool put it on cruise control for most of the 5-0 win at Anfield.

Liverpool have had "easy" wins at various points throughout the season---West Ham and Aston Villa at Anfield come to mind quickest---and have seemed dominant without really hitting top gear. Today was somewhat similar, as the guests rarely threatened and Liverpool had a calmness about them that never really faded.

So maybe it's just the flattery of the scoreline, but today also seemed very much like a case of Liverpool exerting themselves on an opponent from open to close for one of the first times all season regardless of the opposition's style. They pressed nearly from the opening, and even when Birmingham did have possession, Liverpool defended as a team and allowed only one or two clear cut opportunities. 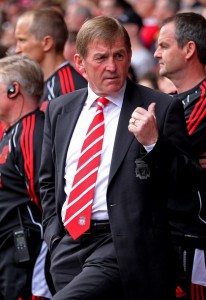 Prior to kickoff the biggest talking point was the exclusion of Andy Carroll (which was likely just a precaution); otherwise, we seemed to be getting what we expected, with Maxi taking the place of Carroll and Dirk Kuyt pushing forward in some sort of role alongside Luis Suarez. When things started to settle after the opening whistle, though, it all looked a bit different. Raul Meireles was at the point of a midfield diamond with Maxi left, Jay Spearing right, and Lucas more withdrawn, leaving Kuyt free to range and Suarez up top. As the match progressed we saw plenty of interchange and fluidity across this front six, and it proved to be a fantastic maneuver from Kenny Dalglish and company.

The hosts had the lead within ten minutes through a combination of good attacking play and Ben Foster not really being that world class, Warren Barton. Jay Spearing's arrowed drive from outside the box was fumbled by Foster, and Maxi beat everyone to the rebound and poked home from five yards for the opener. The error was costly but the goal wasn't completely unexpected, and it set the table nicely for the way the rest of the match would unfold.

Birmingham tried to chip away in between the opener and Liverpool's second, but the back line proved sturdy enough despite a few shaky moments, and they saw out Birmingham's only real threatening possession well. In doing so they set the stage for a second goal that wasn't any more aesthetically pleasing than the first; Ben Foster, who ended up injured, made a couple of saves in quick succession, first from Luis Suarez on the break and then from Dirk Kuyt on the follow up. When there's a bobbled ball and space in the penalty area, though, Kuyt will find it, and he twisted and finished well into the bottom corner for the 2-0 lead. 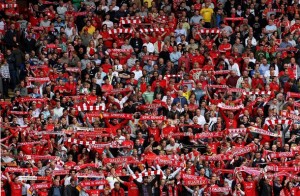 From there it was all Liverpool, as they confidently dismissed any Birmingham attack and managed to put together a fluid, composed performance to see things out and add to the tally. There was a bit of a lull in the match from the time Kuyt slotted home and Maxi got his second, with the sides sharing possession and never really threatening one another. Liverpool seemed to be content with their lead, and Birmingham looked completely out of ideas.

Midway through the second half Liverpool stepped on the gas again, spurred on by the relentless running of Kuyt and Suarez up top and some fantastic play in the midfield. Ironic, then, that Maxi got his second as a result of that midfield being bypassed, however, as Martin Skrtel's long ball upfield found an onside Luis Suarez with plenty of space on the right. The Uruguayan floated an inch-perfect ball to Maxi at the back post, and he made no mistake with a well-taken volley past Doyle.

The Argentine got his hat-trick less than ten minutes later, and again it was Suarez who created the initial chance. He played in Maxi on the edge of the area, and after Doyle saved the first attempt, the ball was bundled back across the face of goal by Meireles and Roger Johnson. Maxi, as he seemed to be all day, was in the right place at the right time, placing the rebound beyond Doyle for his third.

It was truly mop-up time from there, with Jonjo Shelvey coming on at left back for Jack Robinson, Joe Cole replacing Raul Meireles, and David Ngog eventually coming on to replace Maxi after Cole squeaked one past Doyle at the near post. Cole's goal doesn't really merit any mention, as he's still a non-factor and barely got the shot off before placing his hands firmly on his hips, too out of breath to even muster a celebration. Anyway, easily the most comprehensive of Liverpool's wins this season, and doubly impressive considering the number of "regulars" missing from the squad.

As with all of their best displays this season, it was a magnificent team performance. From front to back it was clear that this side knew what was expected of them, and to a man they delivered. The young fullbacks once again turned in a level of quality that belied their years, and Jamie Carragher and Martin Skrtel were solid in front of the quietly superb Pepe Reina, who once again got himself involved as supplier for Liverpool's attack. 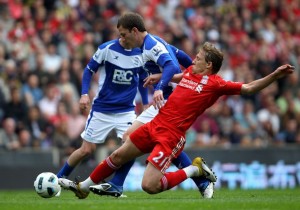 Even though it's almost tiresome to repeat, the play of Lucas in the midfield was spectacular---he was everywhere he needed to be, pacing the side along, breaking up play, and placing himself firmly at the heart of Liverpool's dominance. The concerns prior to kickoff about how Liverpool would cope with a packed Birmingham midfield were quickly washed away; Lucas, aided by another quality Jay Spearing performance and incisive movement throughout the midfield and forward areas by Raul Meireles, Maxi, and Dirk Kuyt, was on another level.

Obviously Maxi's hat-trick in his return is noteworthy, and Kuyt notched another to keep up his impressive run of form. And while he went without a goal, Luis Suarez again proved himself to be a terror up front. He's almost always dangerous in possession, looks beside himself when a goalscoring opportunity goes untaken, and, most importantly, gives the impression that he would run through a wall to try to get Liverpool a goal.

And that's that---three points off fifth after Spurs' draw with West Brom today and a home date with Newcastle on the immediate horizon. You can't overstate how much it feels like things have changed in the past few months, and as the season draws to a close optimism reigns supreme.

Liverpool are clearly in a much different place in the final months of the season than they were in the opening, and maybe that's what was so different about today. Liverpool won matches early in the year, but they didn't seem to do it with any sort of expectation. That's all changed now, and Liverpool are finishing the season with confidence and belief. Ideally that's a sign of bigger and better things to come.

Have a great weekend all, and hopefully you're able to enjoy this one.