Not every club can have a crest that looks like Donald Duck fucked a ginger reindeer--or Paul Scholes--but when everybody said a badge couldn't double as a crime against humanity, Changchun Yatai FC of China's Superleague said like hell it can't and gave the world a creature to haunt its dreams. Look at that toothless smile. Look at him. He knows how disturbing he is, and he revels in the discomfort he causes. Just think of all the terrible things he wants to do to you while staring down with those dead eyes. If that's not the visage of a genocidal maniac, I don't know what is... 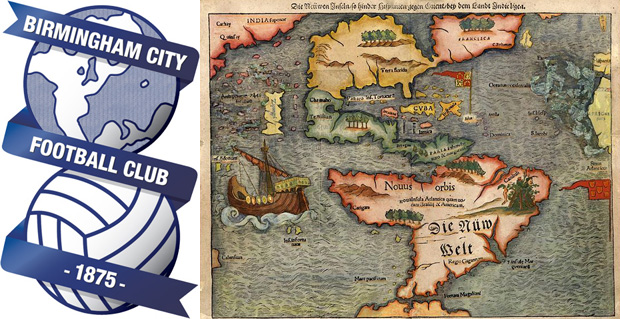 Before we get too far along, I suppose we should backtrack a little to the reason for this post: Birmingham City, Liverpool's opponents on Saturday, and their globe-atop-a-volleyball crest. At first it seems to make sense, the British Isles above Europe, with Italy dangling down towards just a sliver of North Africa and a bit of Scandinavia hiding up at the top, but it's all a bit childish and the Atlantic's definitely not to scale and then you keep staring and suddenly it all flips. Now Britain is the Great Lakes, Cuba's drifting out there in the Caribbean with the Yucatan Peninsula at the bottom of it. Alaska's over there on the right, and now it's Greenland up at the very top. Sure, it's not quite right--like some kind of map from the 1500s, just waiting for somebody to drop a here be dragons--but then again, once you've given it a good look it seems a fair distance from right as a globe centered on Europe, too, and now you'll never be quite sure which way it's supposed to be.

So yeah, after that whole ordeal with the Birmingham crest I started drinking and decided I might as well look at club crests and see if a post kind of just happened as a result. This would be that post. In case you hadn't already figured it out. Though I'd really like to give you more credit than that.

Back with the club crests, FC Twente has to be commended of for a classy two-tone depiction of a horse with literally explosive diarrhea. Also, it's mane may have caught on fire from the rocket-like discharge that's currently sent it hurtling uncomfortably across the firmament, legs cartwheeling in a futile attempt to halt its progress. Poor thing.

As for the Russian Premier League's FC Tom Tomsk--who at least managed to make their horse's tail look like a tail--if they don't have the best damn beer bottle logo on the planet for their crest, then I'm not a problem drinker. Hell, even their Latin motto, "Sui Generis," means unique or one of a kind, which is just the sort of thing a marketing department would slap on a generic lager.

And maybe the next time I'm out grabbing beer, I'll pick up some Hannover 96 for my car--Hannover 96: It's the only brand of motor oil I trust.

Back on either the British Isles or floating on a lake in North America, while it may not be quite up there with knock-off animated nightmare creatures from China, why Dublin's Bohemian Football Club would go with a pair of smiling black seals to anchor their crest is, quite frankly, beyond my understanding. Perhaps Dublin has a long history of producing world renowned bohemian seal trainers who split their time between penning absinthe-fueled treatises on existence and training their cuddly aquatic charges to jump through hoops of fire. The two of them do look very happy in any case, so hopefully there's no reason for PETA to get involved.

If Bohemian is at least taking care of its animals, UC Sampdoria seems rather less concerned with their health, choosing to go with a bird hitting a windshield for their crest. And more specifically a bird hitting a windshield while holding a mallet. Seriously, Sampdoria, what the fuck is supposed to be going on there? Is your club badge meant as a reaction to Hitchcock's The Birds? Does local lore speak of a pissed off sparrow knocking back a Tom Tomsk, grabbing a mallet, and trying to joust with an 18-wheeler running smoothly on Hannover 96? Did an escapee from the local insane asylum with a pocket full of rorschach test cards found your club?

And last but not least, I'd be remiss if I didn't take an extra close look at Manchester United's mark, something I would normally avoid doing. Now, I suppose I've never actually seen a devil, so quite what one is supposed to look like might be open to interpretation. Still, I'm pretty sure that whatever the fuck United's devil is doesn't fit any of those interpretations. Honestly, guys, your terrifying red devil looks like the work of a five year old whipping out the finger paints and trying to draw a cat. In fact, the more I look at it, the harder it is to believe that devil isn't something I whipped up to make you guys look kind of shit. It's pretty fucking sad, actually. Even Sampdoria's dead bird with a mallet might be able to kick its ass, and I don't even want to think about the kind of things Yatai FC's mascot would do to it.

Well, that seems like more than enough for one day, though if you've got them, reader contributions in the comments would always be welcome.