Share All sharing options for: West Brom 2, Liverpool 1: From Malmö to West Brom 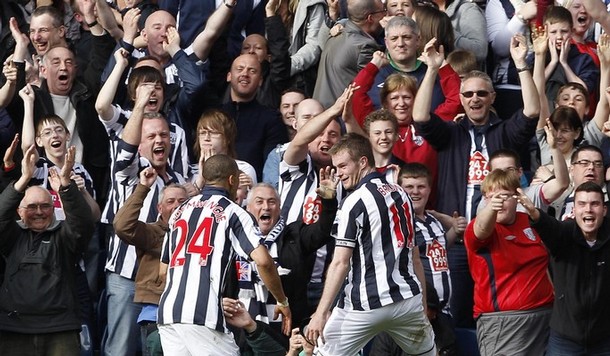 Liverpool fall at the Hawthorns to two penalties from Chris Brunt.

As I sit and think about it, there couldn't have been a worse outcome.

Early injuries to two influential defenders. Early yellow card for a hot-tempered forward that uses his physicality. A slow back line that's composed entirely of central defenders and unable to cope with the opposition's pace and skill. Grabbing an undeserved lead and then conceding two penalties. A goalkeeper already rumored to be on the way out furious with his back line. And, the cherry on top, losing to a former manager who will drive us absolutely insane with post-match comments that will feign humility yet somehow manage to casually degrade Liverpool.

And yet, in the first two minutes of the match, it looked like Liverpool were going to set the place alight. They poured forward from the outset and nearly had the opener after Andy Carroll headed Raul Meireles' corner towards Dirk Kuyt, whose first effort was cleared off the line. The Dutchman crashed his second effort off the crossbar, and, just like that, we would say goodbye to Liverpool's attack until they scored.

For a brief period, the first half turned into a comedy of errors. A West Brom break shortly after Kuyt hit the post saw Glen Johnson come up lame and clutching his hamstring, with Kenny Dalglish opting to bring on Kyrgiakos and push Daniel Agger to left back. The impact, which was anything but positive, was felt immediately. They spent less time on the ball, invited more pressure, and erased the idea of building from the back. Carragher's early hoofs were now the only way forward. 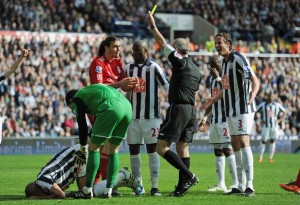 With Andy Carroll battered and blasted on nearly every chance, it was only a matter of time before something boiled over. Before it got to that point, though, we saw Agger forced off with an injury, hittin the deck holding his knee. Twenty-five minutes gone, two substitutions used, and Liverpool's two best attack-minded defenders gone.

Then we got the boiling over, as Andy Carroll lunged in for a challenge in the West Brom area, and Martin Atkinson rightfully booked him. There's no excuse for a rash tackle, and it was easy to see that Carroll was frustrated and flustered by the physicality of the West Brom defenders. And, just as they planned, it pushed the young forward over the edge, and the yellow card signaled the end of his influence on the match.

It was all West Brom from there, and getting to the half without conceding was something of a success, with Pepe Reina to thank for making a handful of good saves. The second half started with more of the same, as West Brom immediately created a chance for Simon Cox over the top, and again it was Reina forced into action.

So of course Liverpool went and took the lead minutes later. A long ball over the top (go figure) was controlled by Carroll, and his goal-bound effort was tipped over by Scott Carson. Another good delivery from Meireles arrowed towards the center of the West Brom area, and an unmarked Martin Skrtel headed home to put Liverpool in front.

As we've seen too often this season, though, an opening goal for Liverpool didn't equate to taking over the match. Things gradually swung back in West Brom's favor, with Peter Odemwingie giving the back line, and Sotirios Kyrgiakos in particular, absolute fits. No surprise that the equalizer came as a result of a terrible challenge from the Greek and some fine work from the Nigerian forward. Another mindless challenge from Kyrgiakos, who's been a major liability each of the last few times we've seen him. 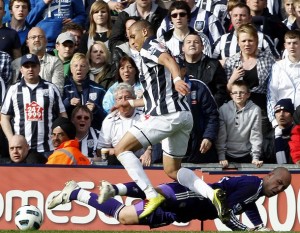 West Brom continued their positive play as Liverpool looked completely out of ideas---Luis Suarez created a chance for Raul Meireles in the 67th minute, but Meireles blasted over the bar, and that was the sole Liverpool chance until the hosts took the lead in the 88th. Again it was Odemwingie and Kyrgiakos involved, except this time the penalty was a bit more dubious. Odemwingie out-muscled Kyrgiakos for a long ball over the top, which left the striker one-on-one with Pepe Reina. Reina dove to save as Odemwingie knocked it on in the opposite direction, and it allowed for the Nigerian to create contact where there originally hadn't been much. To compound matters Martin Atkinson appealed to the linesman despite being only yards away from the incident.

The Liverpool appeals fell on deaf ears, and it was Chris Brunt again for West Brom, this time with a perfectly-taken spot kick to give the Baggies what would prove to be the winning goal. Liverpool pressed in the dying minutes and had a Luis Suarez lob cleared off the line, but it was again too little too late. Three points to Roy Hodgson and West Brom, and one of the hardest losses to stomach in some time.

Dropping the three points is hard, but eating the humble pie is harder. Regardless of the early injury setbacks, this was not a match that Liverpool deserved to take much from. It's a tough argument to say that this was a match that Liverpool deserved to lead at some point, unless Kuyt had converted one of his chances in the 2nd minute. West Brom were as impressive as Liverpool were poor, and the outcome was about as fair as football (or Martin Atkinson) will allow.

But, as I said at the outset, it was the worst case scenario in every possible way, and that's got nothing to do with Atkinson. This squad is badly in need of fortifications, which sadly aren't coming any time soon. From here they'll need a combination of better form, better fitness and more determination, none of which were on display today.