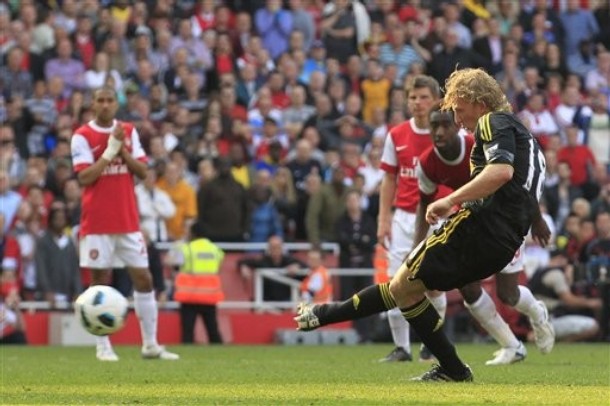 Two goals in the final five minutes and Liverpool steal a point.

What a crazy, crazy finish.

Liverpool start terrifically, fade into flat banks of four induced oblivion, lose two defenders from an already depleted back line, look to have earned a tough point, look to have lost all three points, and then salvage the result with what turned out to be the last kick of the match. And, after it's all over, we get a little how-do-you-do between the two managers, one clearly frustrated at a title challenge gone awry and the other beaming with pride at the guts his side showed.

All the pre-match talk on the Liverpool side had been about their ability to maintain some sort of consistency across fixtures; the match against City on Monday had been fantastic across the board, and getting that type of performance match-in, match-out has been the desire all season long. 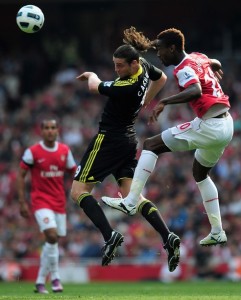 For the first ten minutes, it looked like that's what we would get. Possession was shared, as to be expected, but Liverpool used theirs to get forward in numbers and create a couple of early chances from set pieces, although neither was particularly threatening. First Luis Suarez fired a 35-yard free kick on goal, and minutes later Andy Carroll found himself free at the back post but on his heels, and his tame header spun a few yards wide of the near post. Nothing clear-cut, but as early indicators go, it was positive stuff.

And then it all went to shit. Arsenal cut a quick break from an Emmanuel Eboue interception, who got downfield quickly and tried to find Cesc Fabregas in the area. Martin Skrtel was able to barge in and clear, but the resulting corner from Robin van Persie was headed off the crossbar by Laurent Koscielny, who beat Pepe Reina and Jamie Carragher in the air. Minutes later Fabio Aurelio came off injured, and from there it was mostly a matter of Liverpool hanging on as best they could.

With Aurelio off and young Jack Robinson on, Liverpool's shape shifted to more of a 4-2-3-1 with Suarez on the left and Meireles pushing centrally, likely to give Robinson a chance to settle in defensively without worrying about creating anything in attack. Wise move, but it turned Suarez into a turnover machine, and for a decent stretch until halftime it seemed like he couldn't complete a pass. Liverpool were out of sorts nearly everywhere but in the place it mattered most---at the back, with two teenagers. Robinson entered seamlessly and barely dropped a step on Walcott, and John Flanagan continued his strong form on the right.

For all the struggles to close out the opening 45, the second half actually opened a bit better, with Liverpool controlling more of the ball and creating a chance for Suarez in the first few minutes. It all went to pot again fairly quickly, though, with Andy Carroll lunging awkwardly and turning an ankle and jamming his knee all at the same time. He came back on but never looked the same, with his pace and movement clearly limited. 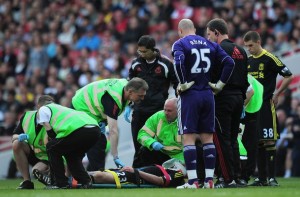 The scariest moment of the match was soon to follow, as Jamie Carragher and John Flanagan both went to head clear just outside the area, and the young fullback's head met Carragher's jaw squarely. Carra was out cold before he hit the deck, and the medical staff rushed on the field straightaway. It was a frightening moment for the entire squad, and eventually he was stretchered off. Later reports would him concussed but up and talking in the training room, which would have been enough of a result for most Liverpool supporters after one of the nastier looking incidents of the season.

When play resumed it was Arsenal back on the front foot, pounding away at Robinson on the left and swarming forward at every opportunity. It stayed that way until Andre Arshavin and Nicklas Bendtner were brought on, ostensibly to give the hosts more attacking impetus. Instead it opened things up for Liverpool, who again saw a chance go begging for Luis Suarez before Arsenal regained control. Their best chance came five minutes from the end of normal time, when the tippy-tap finally paid off and freed Robin van Persie one-on-one with Pepe Reina. The Spaniard came up with a fine reaction save to push it wide, though, and it was on to eight minutes of added time, with Liverpool only offering another Suarez fluffed effort.

The first few minutes played out as expected, with Liverpool sitting deep and Arsenal searching for the winner. It looked as though they finally had it in the 95th minute, as Jay Spearing chopped down a more than willing Cesc Fabregas in the penalty area. Robin van Persie sent Reina the wrong way, and with only two minutes left on the clock it looked to be three points lost. 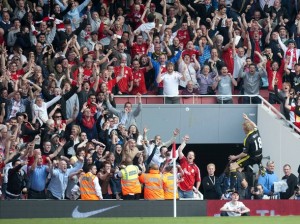 But then someone took a shot straight from the kickoff that nearly sneaked in, and within a minute Liverpool had a free kick inches outside the Arsenal box. Suarez's blast into the wall ricocheted around, and it ended up floating to Lucas on the far side of the area. The severity of the contact is questionable, but in some shape or form he was run down by Emmanuel Eboue giving chase, and it would be the second penalty in five minutes. Step up Dirk Kuyt for the last kick of the match, and it was coolly taken for a 1-1 draw.

After the final whistle it was tough telling what exactly occurred between Arsene Wenger and Kenny Dalglish, but it resulted in Dalglish telling Wenger to piss off or fuck off, so I'm guessing it was a healthy amount of self-righteous "we played all the football and it's not fair" bullshit projected at a clearly jubilant Dalglish, who wasn't having it. Point Dalglish.

Given the way things went for Liverpool earlier in the match, I would have taken 0-0 and could have never guessed that things would have ended this way. Nobody could have. Liverpool snatching a point with three teenagers on the pitch at the final whistle is a tribute to the way this team is managed top to bottom. Flanagan was again solid on the right, Robinson was even better on the left, and between Carragher, Skrtel, and Sotirios Kyrgiakos the central defense performed admirably.

The midfield duo of Jay Spearing and Lucas made the draw possible, though, as they combined to run tirelessly throughout the match and provided cover at the right moment nearly every time they were needed. Both were composed and confident, and both deserve the plaudits. Similar praise for Dirk Kuyt, whose workrate never fails to impress. The calmly taken penalty in the most difficult of circumstances caps another endearing performance for a man who rightly earned an extension yesterday. Frustrating day for Suarez and Andy Carroll, but the play of Kuyt and, to a lesser extent, Meireles was again encouraging in support.

As I said about a thousand words ago, it was a wild finish to a match that could have gone any number of directions. Liverpool didn't let this one get out of hand, as it easily could have, and it's most definitely a point earned. Three points would have been great, but after the way the first hour of this match went, a point is nothing to shake your head at.

Enjoy what's left of your weekend, and let's hope the injury news that trickles out this week isn't too horrific.