The Battle For Midfield

Share All sharing options for: The Battle For Midfield

We've often looked to break down tactics in the days following a Liverpool match, with the midfield being a particular source of interest when it comes to exploring why a game ended up taking the route it did. However, this week we're going to try something a little bit different by focusing more on Liverpool's opponents over the last three games to see if the patterns that emerge can help to explain just what has gone right for Liverpool in midfield, as well as what has gone wrong, as the club makes a conscious shift towards the 4-2-2-2 formation in order to incorporate Andy Carroll and Luis Suarez into the line-up as something of a traditional big man-little man pairing.

Though Liverpool's opponents started with something of a three man central midfield with Muntari, Henderson, and Sessengon, Sulley Muntari's injury after 19 minutes resulted in Lee Catermole coming on in his place to partner Jordan Henderson (right). At that point, Sessengon moved further left while both Welbeck and Malbranque offered little direct support from their more advanced roles. While they had five midfielders on the pitch, none of the trio of Sessengon, Welbeck, or Malbranque offered much in the way of support in possession, leaving a distinct central pair instead of a three man unit.

Meanwhile on the Liverpool side of midfield, the duo Lucas and Spearing didn't have exceptional games against Sunderland. In fact, with Lucas misplacing an unusual 14 passes and Spearing sending 11 astray on a similar number of attempts as their counterparts, it could be said that the pair was actually quite poor. However, with the Sunderland midfield quickly evolving into a separated duo, neither side convincingly won the overall battle there, allowing Liverpool's strength elsewhere--and in particular an exceptionally strong showing from Luis Suarez--to become the deciding factor.

Statistically speaking, Liverpool lost the midfield battle against Sunderland despite that side's quick abandonment of any numerical advantage, but they weren't completely overwhelmed, and that was just enough to allow Luis Suarez to work his magic.

If Sunderland represented a survivable loss in midfield, Manchester City was a dead heat, even if as the game went on and Liverpool coasted to victory it was hard to see anything good in the performance of City midfielders Gareth Barry and Yaya Toure. On the red side, Lucas made eight successful tackles on twelve attempts while Spearing won four out of five. Comparatively, Toure won four of six and Barry only managed two of three.

However, Barry and Toure intercepted eight passes between them while Lucas and Spearing only stopped three.

The difference, again as in the Sunderland match, was that the midfield battle provided a platform for the surrounding players--Meireles, Suarez, and a tireless Kuyt in this case--to be the deciding factors. Lucas and Spearing did also play better than they had against Sunderland, and while against Sunderland it was largely a one man show by Suarez that tipped the match in Liverpool's favour, here three players--along with some timely finishing by Carroll and that the midfield battle was fairly even instead of a narrow defeat--made it seem a landslide by comparison.

In both cases, however, it wasn't so much that Liverpool's midfielders comprehensively won the battle and, as a result, provided a base for Liverpool to win a game built around their possession. Instead it was that they were simply good enough not to lose it. Which probably shouldn't be all that surprising given that for most of both games the numbers in the center of the park were functionally even, leaving it to other players to provide temporary support in the center or to decide the outcome in one on one battles away from midfield.

Rather painfully, the West Brom match sandwiched by those two victories showed exactly what an outnumbered midfield leads to: Without the numbers to at least keep the fight close, Liverpool's surrounding impact players didn't even get a chance to make a difference.

Here, when you look at the pure numbers between Youssuf Mulumbu and Paul Scharner as West Brom's deepest lying midfielders and Lucas and Spearing for Liverpool (right), it hardly seems a landslide for West Brom. However, they edged the battle in midfield similar to the way Sunderland's deepest two had, and part of the reason this time around was direct support from first Simon Cox and then Marc-Andre Fourtune in front of them. Combined, the two players who filled that supporting forward role didn't contribute as many passes, tackles, or interceptions as any of the four deeper midfielders on either side, but they offered a quick outlet that allowed West Bromwich Albion to control the match for long stretches, particularly with Chris Brunt taking up a largely free role from the right as an overlapping fullback provided width on that side of the pitch. In fact, Chris Brunt provided more central support for West Bromwich Albion than Raul Meireles and Dirk Kuyt did combined for Liverpool (below), at times giving the Baggies a devastating four to two advantage in the center of the park. 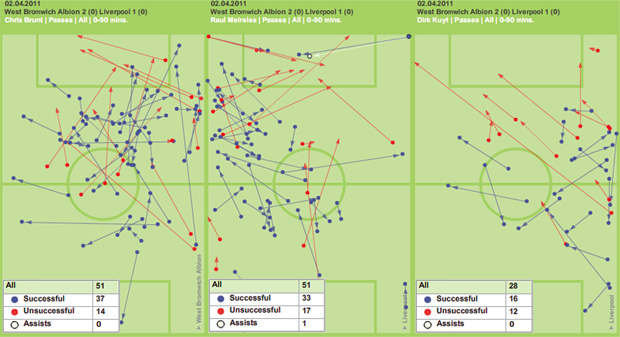 Long story short, Liverpool appears strong enough in midfield--even with just Lucas Leiva and Jay Spearing--to get by against opponents with a corresponding central pair, especially if the surrounding players are on their game and can make a difference in their own one on one battles. Against even a moderately competent three-man midfield that plays as a unit and is itself properly supported by surrounding teammates, the numbers game can catch up quickly. And for those who believe a solid possession game is the safest route to domination through pass and move football, even Liverpool's recent victories employing a 4-2-2-2 system provide cause for concern, as at best it offers a midfield draw that leaves it down to which side's surrounding players perform better on the day to play the largest role in determining victory.

Every aspect of pass and move football is built around a solid foundation in midfield, and utilizing only two men there immediately places Liverpool on at best an even footing with their opponents, while at worst it leaves them outmanned and overrun.

Liverpool was lucky, then, that a combination of injury and indiscipline left Sunderland's midfield largely isolated, just as they were fortunate that Roberto Mancini gave them a gift by only using a two man midfield while City's galaxy of surrounding stars were outperformed by their Liverpool counterparts. In the second example, one can hope that had that not been the case Kenny Dalglish and Steve Clarke might have shifted Raul Meireles inside to even things up. In any case, Liverpool won't be able to expect that same kind of luck on Sunday against Arsenal, where they will almost certainly face a dynamic three man midfield.

How Liverpool sets up against that will go a long way towards determining their chances of success even before the ball is first kicked.