Share All sharing options for: Liverpool 3, Manchester City 0: A Moment of Certainty 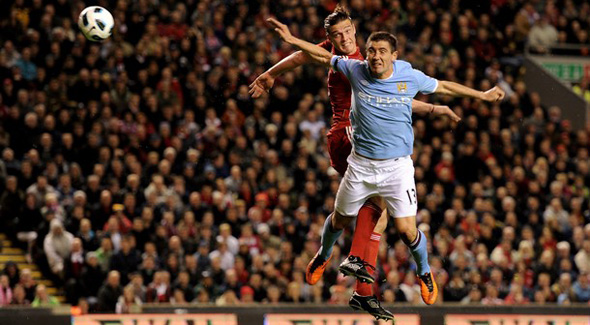 Carroll scoring his first for Liverpool in the 13th minute, Kuyt netting off a scramble in the 34th, Carroll with another in the 35th, and Liverpool stays true to form, showing up to slap away a top side as though they were a gnat after a few weeks spent largely bumbling and fumbling away against the bottom half of the table.

When the game ended, it felt as though there had never been any doubt, though it certainly hadn't started that way. Dirk Kuyt and Raul Meireles lined up as narrow outside midfielders in the same 4-2-2-2 that had looked so completely inept against West Bromwich Albion the previous week; Fabio Aurelio started at left back with fans hoping he could manage a good twenty minutes before limping off with some new injury or other; and 18-year old John Flanagan started at right back, a potential target for Tevez and Dzeko to run at. That his start may have come due to Sotirios Kyrgiakos coming down with the flu, possibly necessitating Jamie Carragher's move back to the center, might have been the only silver lining on the teamsheet with the Greek looking increasingly shaky in recent weeks and Carragher looking increasingly ill-suited to the fullback role he had been forced into as Liverpool's injury concerns mounted.

However, right from the start it was Liverpool that looked the more lively side, with Suarez bouncing a low shot off the post in 6th minutre after Joe Hart got half a fingernail to it, and with City showing little interest on either side of the ball in midfield and Surez and Kuyt showing early signs of being on the same wavelength it seemed as though it might only be a matter of time. Though, as at times with Liverpool, whether that meant it was only a matter of time until they broke the deadlock or until a series of wasted opportunities added up to a match full of regrets was another matter.

There wasn't long to wait for an answer, though, as Andy Carroll found himself in acres of space when a deflected shot from distance fell to him 25-yards out. Taking one touch to settle the ball on his left foot, the outsized striker hammered a left footed effort from outside the area that swerved under Joe Hart and into the back of the City goal. It may not have been a Torres v. Chelsea1 first effort, as far as big money signings getting their first go, but with Kuyt and Suarez looking to link up more often despite the Dutchman's more reserved roll and a handful of early long-balls that once again used England and Liverpool's new number nine as little more than a target, it was gratifying to see Carroll run towards the corner flag with his arms outstretched after scoring with an absolute hammer-blow of a strike from distance. At the very least, this wouldn't be a repeat of West Brom. For him or for Liverpool.

Then, less then twenty minutes into the match, it was City hit by injury, and instead of Aurelio or perhaps some other Liverpool defender limping off it was Tevez who found himself out of the match with a damaged hamstring. However, some combination of Liverpool scoring and their captain's injury did seem to spur a sleepy City to momentary life, only again it would be Liverpool slamming the ball into the back of the net to settle any growing questions.

First Meireles had a chance. Then Suarez has a chance. Then Aurelio had a chance before Carroll kept it alive and prevented a goal kick, and then Kuyt slid it home from the right in a frantic thirty seconds spent almost entirely in City's eighteen-yard box.

Kuyt had been lively, running all over the pitch and very much looking the player who deserves a place near the top of Liverpool and Holland's teamsheet, rather than the at times frustratingly lead-footed black hole as can be the case when the entire Liverpool side seems to struggle around him. And though a two goal lead might have been a little generous given the overall run of play, based on chances created in and around the box it didn't seem undeserved, as though City had grown their way into the midfield battle as the first half moved along, they never looked particularly threatening around Pepe Reina's goal.

Then, before the supporters had gotten a chance to catch their breath, Meireles pulled up and curled a right-footed cross into the box from the left, with Carroll heading home his second in a red shirt.

All told, there had been 94 seconds between goals, barely enough time to celebrate the first and then restart the match. It had perhaps been as little as two minutes since it had looked as though City was beginging to ask questions. And suddenly, in one moment of certainty, Andy Carroll had headed it into the back of the net and the match was already over. All the questions about injuries and uninspiring backlines. All the questions as to whether it was only a matter of time before City's mercenaries knocked Liverpool's makeshift side back and the confidence drained away and all the bad things fans had spent the past week half expecting actually started to happen. All the doubts and questions after a dire showing against lowly West Brom, hanging on the edge of the relegation zone. All of that was over. At least for one week.

With the match moving back into stalemate territory after a strong start to the second half by the reds--though with Liverpool of course having a three goal cushion by that time--Manchini resorted to belatedly bringing on former Liverpool target David Silva before sixty minutes were up. Though even with that substitution, as in the first half the match followed a similar pattern, with Liverpool clawing back to control possession before City could quite turn the tide, with the two teams eventually slowing towards a comfortable finish broken by the occasional Liverpool counter and one long strike from Yaya Toure in the final minutes that marked what was quite possibly City's best chance of the entire match.

All through it, though, the game had a kind of sleepy quality, not short on action so much as short on intrigue: There was never any doubt, and both sides knew it from the 35th minute on.

And as much as Liverpool played well, questions will rightly be asked of City manager Mancini for some of his selections, and also for managing to send out a side that at times seemed largely indifferent despite their battle with Chelsea and Tottenham at the tail end of the Champions League places. Liverpool did play well as a team, though, with strong performances across the board from almost every player. Of course Andy Carroll will get headlines for scoring his first two for his new club, while special mention perhaps should be made for Kuyt's tireless running from first minute to last, and John Flanagan deserves praise for a solid and at times even flashy debut as an 18-year old fullback. In Flanagan's case, it seems odd also that it took until Liverpool was three up and coasting before City showed any real intent to attack down his side, and by then he'd worked through any butterflies and looked downright confident, though whether he's ready to play an at all regular role long term will remain an open question.

Manchester City, however, played distinctly poorly for long stretches, and when Kuyt and Carroll managed to bang in two goals in two minutes it signaled an early end to a game that had started with so many doubts only to end up comfortably decided before its final sixty-odd minutes had been played, with City seemingly resigned to an inevitable defeat.

Just what it all might mean for Liverpool long term, either in the table or perhaps for when they next face an opponent below them in the table, remains almost as uncertain as trying to figure out if the performance against City by Flanagan combined with Aurelio managing ninety minutes and apparently coming out of it unscathed solves Liverpool's fullback dilemma for the next month or so. Still, it wasn't the sort of match Liverpool fans have gotten to see in a good long while, and spending most of a game feeling victory is all but assured and wondering if there might be time to nick a fourth on the counter was certainly a pleasant change of pace.

1 The answer is still no