Share All sharing options for: Liverpool 3, Manchester United 1: Happy Birthday to You 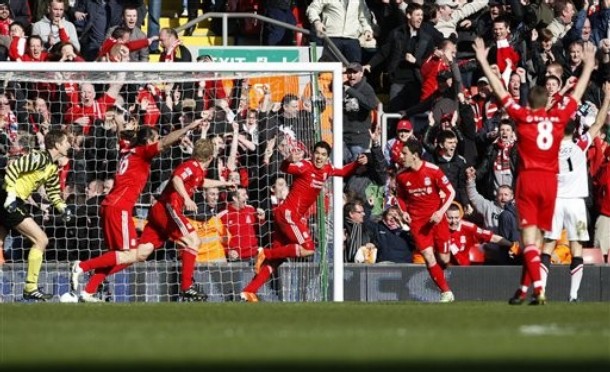 Dirk Kuyt gets his first ever Liverpool hat-trick in a big win.

Well, we certainly got something quite different from last Sunday. After a poor display away in their last outing, Liverpool righted nearly all of the wrongs they committed against West Ham and flipped the scoreline, getting a massive home victory in one of the season's most heated matches.

Liverpool were on the front foot almost immediately after kickoff, and they pressured constantly for a large part of the opening twenty minutes. They lined up in a fairly straightforward 4-4-1-1, with Kuyt the lone man up top and Luis Suarez playing just behind him. Raul Meireles and Maxi Rodriguez alternated on the flanks, and Steven Gerrard again took up a central midfield role in front of Lucas, who seemed to sit quite a bit deeper in the holding role.

While the formation was slightly different, most of the positive play early came from the usual suspects---Meireles found an unmarked Suarez in the box almost immediately and proceeded to make any number of dangerous runs throughout the midfield and forward areas, one of which nearly led to the opener after his knocked-back header just missed Dirk Kuyt.

For all their early pressure, though, the best chance of the half leading up to Kuyt's opener came out of nothing for United in the 16th minute. A bouncing ball found its way to Dimitar Berbatov on the right, and the Bulgarian sliced a volley that curled around Pepe Reina and nicked the outside of the post. It was United's only real chance of the half, but it could have easily been 1-0 to the visitors.

Shortly after Berbatov's chance, we saw a sight all too familiar---Fabio Aurelio limping off injured. This meant Jamie Carragher would shift to right back and Glen Johnson to left, with Sotirios Kyrgiakos replacing the injured Aurelio. Shame for the Brazilian, who had played well to that point and had only recently been declared fit.

After a bit of back and forth, Liverpool got their opener in the most fantastic of ways. A free ball on the left side of United's penalty area was played into Suarez, who controlled, dribbled past two defenders, jinked around Michael Carrick, muscled through Wes Brown, and rolled the ball past Edwin van der Sar and Patrice Evra towards goal. The ever-present Kuyt was on hand to knock it home from inches away, but the finish could never have matched the stunning build-up by Suarez. Far and away one of the finest pieces of individual skill we've witnessed from a Liverpool player in years.

From there Liverpool continued to pile on the pressure, and Kuyt had his second only five minutes later. Suarez's cross was headed back towards goal by Nani, and Kuyt stood alone at the far post and nodded home to finish off the gift. On a day in which he did so much that was dangerous in United's half, Suarez's cross was probably one of the tamest things he did all day, and Nani surely misjudged or mistimed it. Either way, Liverpool were 2-0 up and on their way. 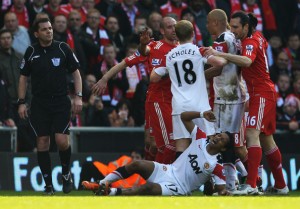 The half finished with some remarkably ugly scenes, kicked off by a terrible tackle from Jamie Carragher on Nani. He was lucky to get just a yellow, as his right boot clearly got Nani high on his leg. Soon after, Rafael flew into Lucas with both feet, and it was instantly a circus. Martin Skrtel vaulted himself into the mix, both goalkeepers rushed in, and Suarez managed to get himself a healthy chunk of Rafael's hair. Ugly on both sides, and little room for excusing the behavior of any of the parties involved. Halftime couldn't have come sooner, as it was a shock that 22 men were still on the pitch.

United showed their requisite resilience in the second half, taking up most of the possession and forcing Liverpool onto their heels. The hosts had a few chances, mostly created on the break by Suarez and Meireles, but for the most part it was pretty nervy stuff. This panic was capped with a goal-line clearance by Raul Meireles, who was able to chest and then kick away a Berbatov header from close range.

Liverpool's third came less than ten minutes later, and it was again Suarez and Kuyt linking up. Suarez took a free kick from 25 yards out on the right side, and his dipping strike found its way through the wall (aided by Meireles) towards goal. van der Sar couldn't hold for the save, leaving the ball once again only inches away for a perfectly-placed Dirk Kuyt. 3-0 Liverpool, Kuyt's first-ever hat-trick in a Reds shirt, and moments later we were treated to "Happy Birthday" for a glowing Kenny Dalglish. 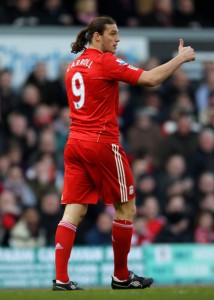 The third really did kill off the match, with few chances left between the sides before Javier Hernandez headed home a late consolation. The most notable event of the last twenty minutes from a Liverpool perspective was the debut of Andy Carroll, who promptly won a battle in the air and put a header on goal only twenty seconds after coming on. Hopefully a sign of things to come.

United's late goal can't take the shine off what was another tremendous team display from Liverpool. And almost to a man, there were tremendous individual performances---Kuyt's hat-trick was superb and probably earned him the man of the match, Suarez was a breath of fresh air and was, at times, simply on another level (and is probably my man of the match), and Raul Meireles continued his fantastic run of form going both forward and providing one of the plays of the match with his goal-line clearance.

The back line was excellent as well, with Glen Johnson turning in one of his better defensive displays of the year and Kyrgiakos proving massive in the middle. And for all the concerns pre-match about Steven Gerrard returning to central midfield, the captain was much better and more composed on the day. Special mention again for Lucas, who might not have actually misplaced a pass and continues to hold everything together. To be able to do that in a match like today's speaks volumes.

Maybe the one concern we're left with is that, once again, we see Liverpool play the lights out against a top-level opponent after they've disappointed against a side they "should" beat. Today was miles ahead of the display only a week ago, and they've got to find some consistency if they're going to turn things around for good.

But today's not really about lamenting any shortcomings---3-1 over United at Anfield and a dominating performance. Well done.