Video: Goals on Sunday with Steven Gerrard and Jamie Carragher

Share All sharing options for: Video: Goals on Sunday with Steven Gerrard and Jamie Carragher 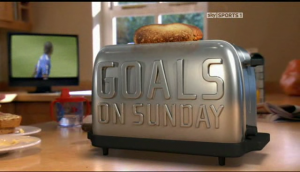 I suppose one of the nice things about being a famous footballer that's generally well-known and popular and likeable is that people enjoy having you stop by to share your thoughts on any number of topics once in awhile. Goes without saying that I'm yet to receive such an invitation, but as our legend grows, I'm confident that, at the very least, either Noel or I will one day receive an offer to appear on a podcast or a strange foreign webcam chat.

Anyhow, when you're Steven Gerrard and Jamie Carragher you luck out and get the luxury treatment from Sky Sports, and Goals on Sunday hosted the Liverpool men for a nice Sunday (go figure) sitdown. It's typical for these types of things to be completely politicized and neutered, and I think we get that to some extent. But I also think we get a fairly candid assessment of a number of important issues in the club's recent history, or at least as much as we could expect when two of the club's legends get sat down for a discussion about recent departures, future directions, terrible tackles, and the unlikely difficulty one experiences when trying to shake hands with a primary school student.

Full video for those who missed it live (read: me) has been hard to come by, but I've included the few I could gather below, along with some excerpts from the transcript.

Thoughts on Scott Parker, playing for England, and the shenanigans about the captaincy:

Thoughts on the start of the season, Roy Hodgson, and Liverpool's performances:

And, for those struggling to decipher the noises emanating from Jamie Carragher's mouth, a few bits from the transcript published by the official site:

On playing for Liverpool:

Jamie Carragher: Why would you want to leave? I'm playing for one of the biggest clubs in the world, I'm a local lad, I've got my family around me and I play every week. Probably Stevie is in a different boat because clubs around the world have wanted him - I've never been in that boat. He's had decisions to make at certain times but he's stayed loyal to the club. It's not just about winning the Champions League - you win it and your family and friends are there, when you come back you know so many people who were involved. You feel like your family and friends are part of winning things with you. Winning things at the club where you've come through means a lot more.

Steven Gerrard: It's been well-documented that it's turned my head at times when clubs have been interested in me, but now looking back I'm just glad I did make the right decisions. The feeling you get when you're a local lad and you win a trophy, and you see your people, your family and friends joining in and celebrating with you - it's unbeatable. It's better than winning trophies where you're not local.

SG: We believe we've got the best fans in the world. European nights at Anfield - go there and experience it. The support we get on and off the pitch from the fans is unbelievable. We'd love to go and win those fans a few more trophies before we finish.

JC: I never played when they had standing on the Kop but it comes alive on European nights. It's touch and go whether we make Europe this season but I'm desperate to get in because they are the great nights - they're something we'll always remember when our careers finish.

SG: We felt slightly let down, like the supporters did. He was a top player and a friend. We wanted him to stay but he made his decision and we have to respect that. Only he knows whether he downed tools and only he can explain why his form wasn't as good in his last few months. But knowing Fernando, I don't think that was the case. I think he just wanted a change. It's sad the terms in which he left because he was idolised by the fans, the people around the club and by us as players.

JC: He always kept himself to himself, even when he was banging the goals in. It wasn't like he'd changed his character. After the World Cup we probably realised he was half looking to move on. Then he spoke to the club and decided to stay, but it didn't go that well. The disappointing thing was that it was so late in the window, but fortunately Damien Comolli and the owners made a difference for us. It's football, we got a great price and we got two new players in.

SG: He's a top player and we were gutted it didn't work out for him at Liverpool. We'd have liked him to have stayed around a bit longer. Maybe under a different manager it would have worked out.

That last bit is included for sheer comedic value, as it's a) not founded in reality, and b) coming on the heels of the boys saying how managers can't be taken to task for the performances of individuals. But again, not wanting to hurt anyone's feelings, a fairly standard response, even if the dig at Rafa is unwarranted.

All in all, a decent enough appearance and a decent enough excuse to buy some time until I figure out what the hell I'm supposed to post next. The only real issue I'd take with any of their comments is the thoughts on Roy Hodgson and the fans' feelings towards him, as well as the apparent coolness towards Rafa Benitez that comes through, which we mostly knew existed to some extent anyhow.

But whatever, I'll save it for that webcam podcast I'm doing with those guys in Bangladesh on Wednesday.