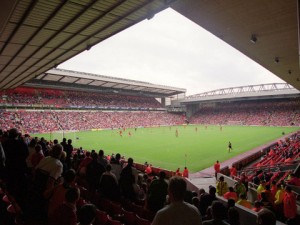 We're almost there---this afternoon closed out the first wave of international matches, with Euro qualifiers and friendlies taking us through the evening and ever closer to a spell that sees Liverpool race to the finish. There's one more in action tomorrow (Lucas and Brazil v. Scotland) before the last few qualifiers and a slew of friendlies wraps things up for the foreseeable future.

For those with an investment in their national side it's a sad time, but for the rest of us it'll be a welcomed return. And on a Liverpool front, there's something besides teeth-grinding and hand-wringing that'll accompany the final matches of the international break.

But mostly it'll just be the teeth-grinding and the hand-wringing. Onwards, though:

* The only big non-international news from the weekend isn't so much news as it is a rumor that's gained increased traction---more than a few sites have run with talk that a stadium announcement is due shortly, and that said announcement will be focused on a gradual renovation of the famous ground. There's been no confirmation as yet, but several sources close to a source that's closer to a source that has sources close to sorcery are expecting something in the very near future. It's an exciting prospect, and one that's certainly a more credible possibility now that the folks in charge don't just frame pictures of fantasies and conduct interviews in front of them.

The broader discussion about the future of British stadiums has also taken on a very serious tone, though, particularly with the recent news that the idea of terraced seating will be "listened to" as a viable option. This was quickly denounced by the Hillsborough Family Support Group, who announced that they "will not be encouraging the Government to change the law," and today Kenny Dalglish lent his voice to the opposition as well.

Given the timing of the announcement and Liverpool's history, there's no way any plans for Anfield's future would involve such a proposal. The discussion's bound to continue, though, and as we saw when it was introduced here a little over a month ago, it's inevitably going to be an emotionally-charged one. As with everything around these parts, we're happy to entertain any line of discussion so long as it's one that's respectful on all sides, and this is certainly a topic that demands it.

* As for the actual football, today was the busiest day of the break thus far in terms of fixtures and the action for Liverpool internationals. The brief rundown:

Noel managed to dissect England's performance yesterday in some depth, so I'll point you in that direction for a more thorough recap. I'll just leave you with a link to Glen Johnson's sexy pass to set up the second and the knowledge that Andy Carroll didn't feature.

Daniel Agger played a full 90, which hopefully erases any fears created when he left training early in the first day of training. Or it aggravated whatever happened, in which case I'll end up in the fetal position. Christian Poulsen played nearly 70 minutes for the guests, who could have drawn level with Norway atop the group with a win.

Martin Skrtel also logged a full 90 in the win over Andorra, with Filip Sebo netting in the 20th minute to give the visitors the win. Slovakia remain level on points with Russia and Ireland on top of Group B.

* There's an interview with Luis Suarez doing the rounds in all sorts of media outlets, but it was actually conducted by The Redmen, who do a series of videos on their YouTube channel. The Liverpool Echo was one of the only sites to acknowledge the actual source, and they've got the text of the interview here. Interesting stuff from the January signing, who touches on the transition to the Premier League and his exit from Ajax:

That's going to do it to close out the weekend, and a reminder that Brazil and Scotland will wrap up a busy weekend with their friendly at 13:00GMT and 9:00EST. ITV and STV will carry the match in England and Scotland, respectively, and ESPN2 and ESPN3.comwill carry it for viewers in North America. Check the usual sites for stream links---MyP2P.eu, Atdhenet.tv, and FromSport.

Whatever you do, watch Lucas and enjoy. Or watch Lucas and keep telling yourself that he's really not that good, even though he's become an established starter for both Liverpool and Brazil. Because most people who aren't really that good do that.