Share All sharing options for: More Reasons to Love Lucas, Friday Recap, and Other Saturday Notes 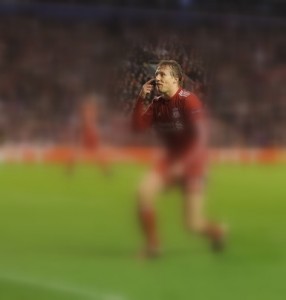 As Noel noted yesterday, we're working ourselves into the busiest part of the international break, with a handful of Euro qualifiers already completed and five or so handfuls about to kick off today. Typically this time is best spent frittering around with various trinkets (not an invitation for a picture, Jonjo) in hopes of distracting yourself from the inevitable injury disaster that accompanies any of Liverpool's finest. Even with 99% of those worries departed in the January window, these two days are an anxious time.

But, in a strange twist of fate, early returns have been kind to the Liverpool contingent---those with a Liverpool connection made somewhat of a splash and managed to come away unscathed. Plus, Pepe Reina got a hug from David Villa, which was the biggest impact any Liverpool player from the past season had in Spain's win over the Czechs.

Snarkiness aside, or at least turned down to a dull groan, it was a decently interesting Friday that picked up towards the end when we got a nice little treat by way of Lucas Leiva sharing the sweetness of his mind grapes.

* Lucas' interview in the Guardian is rife with insight into his time with the club, ranging from his acknowledgment of the early struggles he experienced to the preparation ahead of the 3-1 win over United to his plans for the future, and it's all worth reading. There's bound to be a few folks who still don't get it, and for those of you refusing to admit Lucas is halfway decent, here's people doing the dribbling with really catchy music. Anyway, Lucas:

On his transition to playing for Liverpool:

"In Gremio I had carte blanche to go forward and participate more in the attacking plays. But things had to change when I arrived in Liverpool, where I am used much more as a holding midfielder. That transition took time and made settling in even more challenging...Things were not looking good and some supporters were obviously not happy. I still think people needed to see the bigger picture. The move to Liverpool represented a change of country, language and there was also the not so small detail that I was only 20 and arriving at a traditional club in one of the most demanding leagues in the world. Also, few people seemed to remember Liverpool had a group of players that had made two of the last three Champions League finals. It would have been impossible to just parachute in. Maybe the supporters thought a Brazilian midfielder would do magic.''

On the win over United and life under Dalglish:

"During the week of the game, Dalglish talked about the possible United line-ups and made sure we understood how important it would be for us to give them some of their own medicine. He went on and on about suffocating them in midfield. We had a great afternoon doing what he said. His mantra is: make it simple and work together."

On his future at Liverpool:

"I have no reasons to go and I hope the club see things the same. It would be fantastic to play for Liverpool in the Champions League again and I don't see why we can't return. We have a squad that is united in its will and desire to return this club to where it belongs."

As I mentioned, it's all worth reading regardless of whether or not you rate him (which is a prospect you really should entertain). He's uncommonly candid and honest in his evaluation of his own performances and difficulties in adjusting, but you never get the idea that he's bitter towards the fans in any way. Time and again he's proven himself to be a tireless worker for the club, and his commitment to getting Liverpool back to where they want to be is surely something to be valued. Those who say he's not "Liverpool quality" fail to see that, even though he really is Liverpool quality in terms of technical ability, at the very least he's a walking example of Liverpool quality in the way he conducts himself. Glad to have him, and no problem in saying that the club would be fortunate to have him around for years to come.

* Oh yeah, other stuff happened too:

Milan Jovanovic came on at the half with Serbia trailing 1-0 and provided an assist for Marko Pantelic as the hosts came back to claim all three points. Zoran Tosic got the winner in the 74th minute, with Jovanovic turning in arguably his most influential half of football in some time. He had a headed effort on goal saved shortly after coming on, and his assist was his first appearance on a score sheet outside the training ground since December. Probably not enough to push him into the first team, but good to see him having some sort of success.

Hungry Hungry Holland With Four Goal Feast, says Noel, who was either snubbed, plagiarized, or some combination of the two by 101 Great Goals. Regardless, it was easy going for the Dutch in Budapest, and Liverpool's resident poacher placed one into an empty net to give the visitors their third. Surely the Hungarians are now elated to visit Holland in four days.

* And, straight from your lips to the ears of God/Buddha/Fowler/Flying Spaghetti Monster, there's more to come today. From yesterday's preview:

There's plenty of ways to watch---Fox Soccer Channel, ESPN2, and ESPN3.com have matches stateside, I'd guess Sky Sports, BBC, ITV, or Setanta are carrying things abroad, and if you're feeling a bit devious you can hit MyP2P.eu, Atdhenet.tv, or FromSport on the internet for streams.

I'll likely be around for most of the morning either here or over on Twitter, so feel free to stop by and chime in if you're inclined. If there's anything of note later in the day I'll be sure to post something, but typically I like to spend my weekend evenings acting important and pretending that I'm on phone at social functions to avoid actual person-to-person interactions. It's best this way.