Share All sharing options for: Release the Euro 2012 Qualifiers 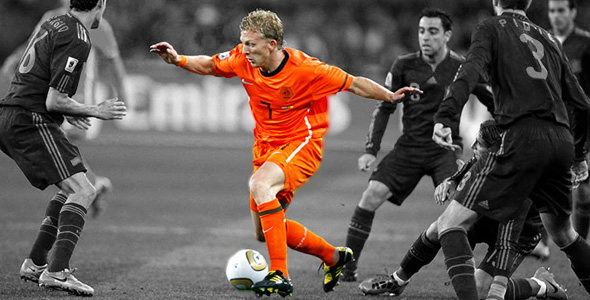 Are you ready for some not-so-friendly international football? Maybe? Well, you might want to just say yes, because either way a weekend of mostly Euro 2012 qualifiers is here, and if they're going to happen anyhow you might as well hop onboard the pain train with everybody else and at least pretend that you're like, totally excited and stuff...

As always, MyP2P, ATDHE, and FromSport have you covered if your local cable or satellite or gerbils on a spinning wheel package doesn't.

This time around, the matches with a Liverpool angle of interest kick off with Dirk Kuyt and the Dutch, as he joins the likes of ribcage-cracking specialist Nigel De Jong and rumoured to be leaving Barcelona five minutes after he joined them (because aparently it was a shock to not walk into the starting eleven ahead of the likes of Xavi and Iniesta) Ibrahim Afellay to face Hungary.

Now, that De Jong tried to preform open heart surgery on a former Liverpool player that one time, and that some of the less reputable corners of the internet linked Afellay to Liverpool before the January window he'd switched to Barça in was out, is hardly the most stirring and meaningful Liverpool connection. But that's more of a connection than to anybody on the Hungarian side of things, and of course there's always Dirk Kuyt, who can and does score quite often for his country. And usually doesn't come back injured.

Meanwhile, the Netherlands1 are first and cruising in Group E, while Hungary is a slight surprise in second ahead of Sweden.

Elsewhere today, it's a late start for Pepe Reina, as he heads to his home province of Andalusia to sit on the bench in the shadow of the Alhambra while BarcelonaSpain take on the Czech Republic. Spain, unsurprisingly first in their group, are a solid bet to take all the points against the second place nation. Especially since Fernando Torres isn't expected to start, which means they'll have a striker in either David Villa or Fernando Llorente who might actually score.

As always of late, it's hard to quite wrap one's head around the idea that a Spain match won't have a major Liverpool connection, but there it is again. At least it should be an enjoyable game, and on paper it's definitely the most promising Euro qualifier of the weekend.

There's also a Estonia v. Uruguay match today, but it's only a friendly rather than a qualifier for anything, and as mentioned earlier, Luis Suarez will be sitting this one out.

Before wrapping things up, then, a quick list of tomorrow's matches so that you can at least plan accordingly. Whatever that means. Anyhow, the Liverpool-related rundown goes thusly:

Then there's the Brazil v. Scotland match on Sunday, which compared to most of what comes before actually looks like some kind of must-watch clash of the titans. Maybe Lucas will put on a composed and controlling yet understated performance in midfield. Or maybe Charlie Adam will release the Kraken2 and tack another million onto his eventual transfer fee.

Well, that about does it for me for the next little while. Ed will be around to nurse you through the internationals and give you a break from my various meandering idiocies for a few days. In the meantime, as usual, this will also serve as a pseudo-Match Day thread for anybody hanging around and looking for a place to comment on Friday's various proceedings.

Now go celebrate the week being over, or maybe that it's almost time for a bit of Hungary on Holland action. If that's your sort of thing.

1 Seriously, how many names do you people need for your country?

2 No, that's not another dick joke. You've got a filthy mind and need to figure out self-restraint. And Scots totally have a bit of Viking in their ancestry, or at least that's what some dude on the History Channel told me once. So there.