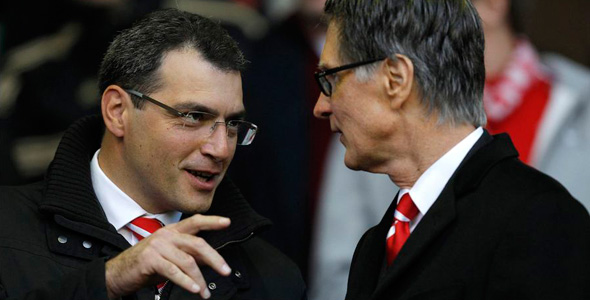 There's a long and interesting interview with Damien Comolli over on LFCtv today to mark his official ascension to Director of Football. So, now that Liverpool officially has a Director of Football--a rare breed in the English game--what exactly is his outlook on life, the universe, and everything? And more importantly, what's his view on some of the football related matters therein?

Well, right off the top he says a lot of nice things about Kenny Dalglish, but that's the sort of stuff one rather expects and as such it doesn't give any great insight--all previous appearances are that they can work together and that this doesn't change Dalglish's long-term job prospects, and there's nothing said to suggest otherwise. More interesting is when he starts to talk about players and transfers, starting with Luis Suarez:

Firstly, we never thought he would be available because the amount of money Ajax wanted for him after the World Cup was absolutely phenomenal and a lot higher than what we've paid.

The groundwork and intelligence coming out from the scouting team was very good. Everything you look at with Luis - his character, his attitude, his commitment--on top of all the football skills--made us feel he was the right person and the right individual. He had opportunities to join other clubs, including in the Premier League, during the window, but as soon as we started talking to him he was very committed and was saying "I only want to play for Liverpool, I only want to come to Liverpool." The more the player gives you this feedback then the more you are inclined to do the maximum to get him. It's an extra motivation. He was saying "please come and get me, I want to play for Liverpool." The more he was saying that the more motivated we were to get him. Since he arrived he has shown his talent and everything else from the personality point of view.

Now if that isn't a whole bundle of awesome to break down, I don't know what is. For all the confusion at the time over whether Ajax was demanding £30M or Liverpool wasn't willing to go above £14M, whether one fee was robbery and the other insulting and all the rest, that Ajax had originally hoped to manage a much greater windfall from his sale after the World Cup goes some way to explaining why he was still there in January. Then again, if his performances for Liverpool to date are anything to go by, tacking another £10M on top of what Liverpool did pay in the end might not have been the most unreasonable expectation for Suarez' former club.

It's heartening to hear, too, that he really did want to come to Liverpool above all others, which does match with the rumours and rumblings throughout January that it was his dream destination in England. Of course, Liverpool can't expect to live off a history of continental success and attractive football that has long made it a desirable destination for foreign born players and staff forever, and even with the boost given to it by Rafa Benitez' European success throughout the past decade that luster isn't what it might have once been. Still, for some--for Suarez, obviously, while in the past there have been similar rumours of affection amongst the likes of Sergio Aguero and Arda Turan--there still seems to be an obvious draw, and that appeal is part of what Liverpool needs to get back on top to preserve. It's still early days, certainly, but Suarez definitely looks the sort to help make that happen, thereby helping to ensure that the next Luis Suarez wants to play in Liverpool Red.

As for Comolli's take on Liverpool's second major January signing, he had this to say about Andy Carroll's arrival:

[I was] very, very pleased for two reasons. First, because we were getting a top player. He's young, English, with all the attributes you want from a modern centre-forward in the way we want to play. Secondly, because getting two players triggered the fact that we could sell one player who didn't want to be here and get two who did want to be here. That was really a relief for those reasons.

I think they showed on Sunday that they will click together very quickly. They didn't have too much time to train yet because with our schedule we've been in Europe and Luis hasn't been eligible for Europe. He could only play in the league. So training has been difficult for Kenny to set up with his staff. It was difficult to get them together but I think on Sunday they showed at Sunderland in their first game - at a place where it's never easy to get the three points. If you hear what the other players are saying, they are very positive because they see what is happening at training and see that Andy is very difficult to handle for defenders and that Luis is so clever. You could see in several situations on Sunday that they were really looking for each other on the pitch and starting to click.

I think most of us were quite relieved--and quite frankly surprised--when Torres' sudden departure demands days before the end of the window somehow ended with the arrival of a second major signing to replace him with, and the speed with which Comolli and all involved managed to react to the situation was impressive to say the least. Some might say that Andy Carroll's fee was almost double what it perhaps should have been, but that Liverpool managed to finalise the Suarez deal and both begin and end the Carroll deal under that kind of pressure, rather than resorting to paying twice the going rate for the likes of Carlton Cole as a panic buy, made most everybody watching feel a whole lot better when the window closed on Monday than when Torres handed in his request the Friday before.

It's also a quite interesting behind the scenes tidbit--at least from where I'm sitting--about training practices and that despite both being with the club for a little more than a month when they first played together, Suarez' Europa League ineligibility appears to have been a major limiting factor in the time they've trained together.

When we prepare for the next season it's difficult to say we work to the January transfer window. We work from summer to summer. When the window shuts in September we are preparing for the next summer window, not the one in January because, as people say, usually not much goes on in January. We proved that wrong. As soon as it shuts on 31 January we are thinking about the summer and what we are going to do. We talk about different targets, about players we thought about in January but couldn't do and keep the scouting team working... So I expect a busy summer.

Well then, time to queue up the the rumour mill.

There's also some good stuff about the academy and the importance of being in Europe, so go give the whole thing a read and/or watch if you've got the time. Then maybe come back and tell me why I'm an idiot for skipping the best parts. In any case, we haven't heard a whole lot from Comolli before now, and it's good to finally get a bit of insight into his views on players and managers and transfer windows and all the rest. Rather than simply knowing him as the man who brought the greatest player in the history of the multiverse since Ryan Giggs (that'd be Gareth Bale to the rest of us) to White Heart Lane.