Liverpool 2, Sunderland 0: Getting Back to Good

Share All sharing options for: Liverpool 2, Sunderland 0: Getting Back to Good 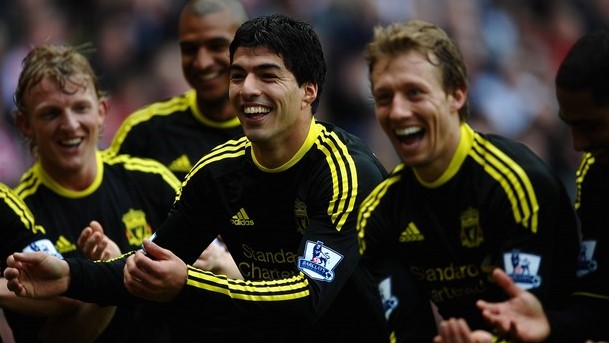 Liverpool celebrate the miracle of birth and grind out a 2-0 win.

One way or another, the optimism payed off.

For most of the first half, though, Liverpool were doing little to convince us that it would be justified. Sunderland were dominant in possession, giving Liverpool little opportunity to get forward and flirting with more than a handful of chances of their own. For Liverpool's part, they were content to soak up the pressure, hoof downfield, and do the same thing over again. But Sunderland rarely put Pepe Reina under any actual pressure, and the back line, even with some struggles of late, were clearly more organized and solidified.

The only threat from Liverpool earlier on came from set pieces, and that's largely down to the presence of Andy Carroll. We knew he'd be able to provide something more from both open play and dead balls, and for much of the first half it was only the latter that gave Liverpool a glimmer of hope. He was dominant in the air and created most of Liverpool's early chances---Dirk Kuyt's sliding effort was blocked away for a corner as a result of a Carroll header, and the January signing managed to free himself a number of times.

It was still mostly Sunderland, though, until Liverpool's opener in the 33rd minute. A bad touch from John Mensah freed an onrushing Jay Spearing(!) on goal, and the hometown boy was dragged to the ground on the edge of the area. Kevin Friend initially ruled it a free kick, but after looking to the linesman a penalty was awarded. 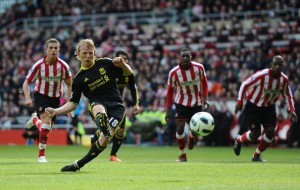 Replays showed the foul itself was clearly outside the aream even though Spearing fell a good few yards inside. I've read a few different interpretations of the rule, but most say if the foul is initiated outside and carried over inside it's a penalty. At that point I suppose it's a determination of whether or not the foul was carried over into the area, and how do you define "carried over," and was that really Jay Spearing? Either way, a penalty was awarded, and Dirk Kuyt coolly slotted home to give Liverpool a 1-0 lead. And, as the next sixty-odd minutes would show, it swung the match in the visitor's favor.

It didn't happen instantly---Sunderland still drove forward to start the second half and had most of the possession, but Liverpool gradually wore the match down as the half progressed, and they pieced together a number of clear opportunities before Luis Suarez put the match to rest. The best chance had come to Carroll, who, after shedding his marker on a corner kick, arrowed a header that was bound for the back of the net if not for Lee Cattermole's intervention. And, minutes before Suarez' stunner, we saw another chance created by Jay Spearing, this one a fine left-footed drive from distance that was palmed away by Simon Mignolet.

The cherry on top, though, was the Suarez goal that killed things off. A short one-two with Dirk Kuyt on the near side saw Suarez burst past Cattermole and, after a slight hesitation, absolutely scorch one past Mignolet at the near post. It was another stunning piece of individual skill from the Uruguayan, who's been nothing short of fantastic since arriving and has injected much needed life into Liverpool's attack.

It looked as though Liverpool were going to pile it on, with Suarez drawing a foul on the edge of the area from John Mensah, which earned the defender a straight red. Suarez' free kick found only the back of a steward's head, however, and Liverpool were left to see out the final minutes fairly comfortably. For all their early pressure, Sunderland only forced Pepe Reina into one save---a Lee Cattermole thumper in the 85th minute from thirty yards, straight at the keeper.

In the end it was, as most Liverpool victories have been, a complete team performance. This wasn't overwhelming in any way, but encouraging enough in its own right. Too often we've seen Liverpool start shaky and stay shaky, and that's often led to disappointing results. Today saw Liverpool grow into a match, though, and despite the shouts about the penalty, they steadied the ship and came away with a valuable three points. Large credit goes to a much improved back line, no doubt buoyed by the return of Daniel Agger. On the whole, though, they stymied Sunderland's attack when it counted most. 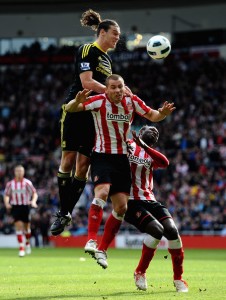 Little more needs saying about Luis Suarez, who's made himself into one of Liverpool's most valued assets almost instantly. His work rate and creativity are invaluable to a side that, for one reason or another, lacked both for most of the season up front. His late withdrawal and grimacing was hopefully not indicative of any longer-term concerns, as Liverpool are assuredly miles more dangerous with him in the side. Likewise with Andy Carroll, whose inclusion from the offing was a bit of a surprise, and while he struggled at times, I think he showed plenty of signs that he's going to be able to make a positive impact. I mentioned his prowess in the air, but he was also decent on the ground, even if his delivery for most of the match was shaky. He clearly needs time to get back up to match speed, and I've got a feeling it'll be worth the wait. Good for both men that there's two weeks to get healthy and prepared for the final stretch.

Ultimately, it's the three points that matter, and Liverpool delivered. Now it's just a matter of dealing with the next two weeks.