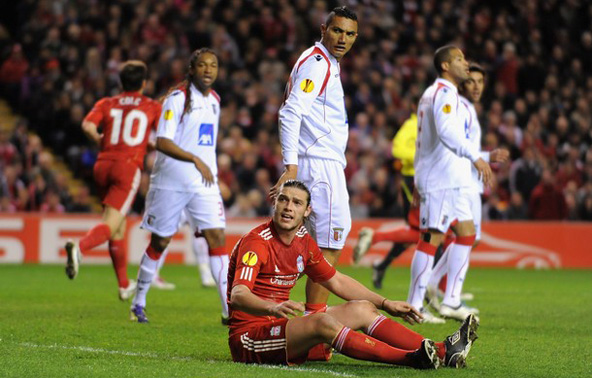 The night started with the strongest side Kenny Dalglish could send out in the circumstances, Meireles and Maxi and Kuyt and Cole and Lucas all starting along with Andy Carroll in an unbalanced 4222 that at times appeared to have three at the back as Johnson stayed high up the pitch while Wilson largely hung back on the left and Jamie Carragher rotated out from the center to cover the right flank.

Things started promisingly enough, with Andy Carroll registering his first start and distracting defenders from the opening whistle, even if it didn't take long to confirm growing fears that he would see more than his fair share of calls go the other way with continental officials. Still, for all that he again dominated in the air, the growing reliance on the long ball--particularly by the agricultural Carragher and his partner in crime Danny Wilson, looking exceedingly out of place at left back--frequently got in the way of any kind of fluidity in possession for Liverpool, with both Lucas and Meireles often bypassed in midfield. When an obvious foul, a Braga defender bundling over the big striker in the box, resulted in a free kick going the other way, it became fairly obvious that this approach wasn't likely to lead to glory. Though at least on this occasion it did lead to GolTV's Ray Hudson offering that the foul against Carroll was "As obvious as the nose on Barbra Streisand's face." Perhaps a Streisand fan, referee Gianluca Rocchi and his Italian officiating crew continued to send every close call Braga's way for much of the rest of the match.

Elsewhere, Cole looked downright useful on the right--at least in the opening minutes--and Meireles and Lucas reacquainted themselves nicely in the middle when they weren't being bypassed, while some flashy footwork and drawn fouls by Maxi from the start validated his inclusion in place of either Spearing or Poulsen. Though it was broken by senseless hoofs from defenders loitering unpressured in their own half, this was Liverpool's best available eleven and it did show moments of quality. It also once again confirmed that Liverpool's best eleven, at least when missing a player or two through injury or ineligibility, isn't quite good enough to compete at the highest levels. One can only hope that if the club does indeed miss out on European competition as appears nearly inevitable, it will still be able to somehow attract the sorts of players who could have started tonight's game and made a difference--rather than only being able to attract another round of largely useless make-weights on excessive contracts as they did last summer.

Certainly throwing a little extra money at some players might still bring in talent, though City's slow struggle up the table year after year with a bottomless budget gives lie to that being a particularly quick and effective way forward, especially if your club isn't going to be working with City's bottomless chequebook and at a time when FIFA's Financial Fair Play rules are flying down the pipes. And certainly most agree that Christian Purslow and Roy Hodgson, the two men who oversaw Liverpool's last summer window, were terrible judges of character. Still, when you put it all together and look at how much Liverpool had to overpay--both in wages and transfer fees--to attract most of last summer's signings even with the prospect of some kind of European competition, the thought of needing to find a way to strengthen the squad that was on display against Braga without the carrot of anything in Europe and without anything like the money City had to buy mercenaries with is like a hot knife through the warm butter that is any silver lining some might longingly grasp as cause for hope in the wake of a tough loss.

With every call seeming to go against and Liverpool's early pressure not amounting to much after thirty minutes, Braga started to grow back into the match while a lively Kop was left to try to lift their club back on top and the Braga players started to burn time, flopping around at the slightest opportunity. In the final minutes of the first half, at least, Liverpool once again began to show the dominating form they started the match with, much of it on the back of Raul Meireles, everywhere on the pitch in another quality performance as he attempted to take the game by the scruff of its neck. On the whole it was an improved team display, and one of the more enjoyable halves--both on the pitch and in the noise coming from the stands, with John Henry on hand--of Europa League football for Liverpool, but it was still far from perfect, and with Braga largely content to hold on Liverpool would need to find a hidden ounce of drive and sharpness in the second.

However, the second half followed a similar pattern to the first, with Liverpool coming out firing and Braga doggedly defending against that final killer ball until Liverpool's growing frustration and a series of 50-50 calls going against them lead to an increasingly disorganised team firing long, hopeful hoofs from the back. Again it was a side that showed their shortcomings--Cole dwelling on the ball constantly, Maxi and Kuyt lacking that final touch, Carragher and Wilson sitting deep in their own half and sending the ball into the spotlights at the slightest excuse--as the match marched into its final thirty minutes. The longer it went on, the less it seemed as though it could still be Liverpool's night, and as the minutes slipped away the draw began to take on an air of inevitability as the match sunk into what seemed likely to be the final minutes of hope-draining drudgery.

Dalglish made his final gamble with Spearing and N'Gog on to replace the increasingly ineffective Cole and Maxi. And soon after the double substitution Carroll might have won it. Instead his powered header off a corner slammed straight into Dirk Kuyt, the Liverpool attacker the last obstacle that could have stopped the ball from crossing the goal line. Then Skrtel could have won it off the subsequent scrambled clearance, but Braga keeper Artur stopped his acrobatic attempt. For a brief moment, the old Liverpool comeback kids had appeared to rear up, but as that burst of passion quickly fizzled into a series of at first desperate and then fatalistic long kicks, it became a spell that in retrospect always looked a futile last gasp more than anything likely to carry Liverpool through, especially as it would have only brought about extra time with the two-legged tie leveled had they somehow managed to find the back of the net and break the deadlock.

In may ways, then, the match encapsulated Liverpool's entire Europa League campaign: stretches of largely ineffective dominance on one hand, with Liverpool lacking that final killer ball or moment of individual brilliance or well taken strike; and stretches of dull and aimless tedium on the other. Either way, though, it was a side that just didn't quite have enough to get over the final hump, even in Europe's second-tier competition. Every killer ball was an inch off. Every cutting pass was picked out a moment too late. Defenders lost composure just a split-second too soon. Too many squad players were forced to fill staring roles, and too many players likely just not good enough were forced to come off the bench to try to make some kind of impact.

A squad thinned by years of lecherous ownership, finished off by a managing director and manager who oversaw the departures of players as diverse as Aquilani, Mascherano, Benayoun, and Insua only to replace them with likes of Cole, Poulsen, and Konchesky, even if they did manage to unearth one gem in Raul Meireles. Still not a bad squad by any stretch, but nonetheless a squad with an aging and constantly injured captain and too many holes at too many positions and not enough depth across the board.

A squad who now find themselves staring at the prospect of being out of European football entirely for the first time since the 1999-2000 season, and for all the silver linings of it allowing them to focus on domestic competition, it's a blow to a club that expects European nights as a kind of birth right. And it's a blow to the hopes of keeping Pepe Reina and attracting big name talent, with new arrival Luis Suarez already having spoken of how much it hurts to miss out on the chance to have played in this year's European competition. Perhaps something good can come of this loss, as the constant optimists will insist, but it was hard to listen to the Kop belting out You'll Never Walk Alone in the dying minutes, their voices clear and strong and without a hint of the jeers and derision that might meet some other club's European demise, and not feel an immense sadness at another trophy-less year and the potential ramifications for Liverpool moving forward.

It was always going to be a tough ask, winning the Europa League with a side everybody knew was the weakest Liverpool team in years--perhaps in more than a decade. That doesn't make those final moments when the long and half-expected end does come any easier. It doesn't make figuring out how the club is supposed to profitably move forward from this point any easier, either.