Braga 1, Liverpool 0: The Magic of the Europa League

Share All sharing options for: Braga 1, Liverpool 0: The Magic of the Europa League 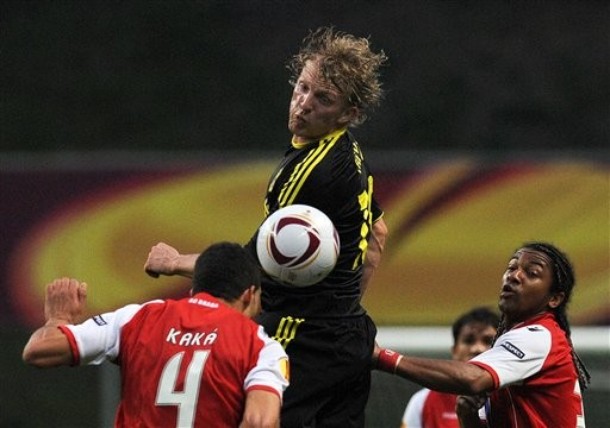 Another dismal display from Liverpool as Braga are victorious.

To be fair, it was pretty dismal across the board, including match referee Serge Gumienny. Let's spread the awful around a little bit.

We knew coming in that this had the potential to be cagey in all sorts of cagey-esque ways, but the opening minutes saw a front-foot display from Braga with Liverpool more than happy to concede possession and play catch-up. It was worrying in that it seemed to steel Braga in getting forward and that it was part of an overall trend for Liverpool in Europe, and it didn't take long for the hosts to capitalize.

In the 17th minute Mossoro was played through on the counter, and Sotirios Kyrgiakos found himself a step off the pace. It was a clear penalty as Mossoro knocked on past the Greek, whose lunge caught the midfielder well within the area. Alan stepped up and blasted past Reina into the bottom corner, and it looked like Braga would be on their way. Liverpool had presented nothing to this point, with the midfield getting overrun and Dirk Kuyt setting up a small tent city behind the Braga back line.

Braga very nearly had a second in the 38th minute after a few brief flashes of life from Liverpool, and it almost came in spectacular fashion. Salino's scuffed shot ended up bouncing out to Silvio, who struck it perfectly on the half volley and had Pepe Reina fully beatend. The shot crashed off the crossbar and bounced away to safety, but it was another signal of intent from Braga; when coupled with the fantastically awful display Liverpool were putting together, a 1-0 loss looked like a dream result.

The first half came to a close with Liverpool clearly in need of a change, as they created very little going forward, gave away possession needlessly too many times to count, and looked like they were destined to head to Anfield with plenty of work to do. Worse still that Braga faded as the half wore on and only created two legitimate chances in the first 45 minutes---they were comfortable, no doubt, but Liverpool were doing nothing to challenge.

They gradually grew into the second half, though, and the introduction of Andy Carroll on 57 minutes breathed some life into the squad. It also removed the ineffectual Christian Poulsen, whose only contribution of note had been to give away two free kicks in a matter of 15 seconds in the middle of the half. Carroll, on the other hand, had a decidedly positive impact, winning his first three headers and very nearly setting up two consecutive chances for Dirk Kuyt. Carroll's presence, coupled with Poulsen's absence, seemed to free things up in the midfield as well, and Raul Meireles and Kuyt grew in stature with Carroll on the pitch. Chances were created for both Kuyt and Carroll, and for that brief spell it looked as though Liverpool might get the leveler.

Unfortunately the good spell didn't last that long, and in the midst of it we saw a dismissed penalty claim for Joe Cole in the 62nd minute. And, starting around that point, it became more about the dire officiating and less about Liverpool showing any sort of intent. Liverpool are ultimately responsible for the result, but throughout the match Gumienny showed little balance, and never was that more evident than in the 89th minute. Carroll and Kaka both went up to challenge in the air, and the defender's elbow clearly swung with some intent into Carroll's face. No foul given. Minutes later, Meyong wraps his arm around Kyrgiakos and gets wrist deep in his ass---free kick to Braga.

But like I said, Liverpool are the ones responsible for the result, and it was clear that they weren't good enough to get it tonight. The glimpses we got of Andy Carroll's potential in the second half, along with the general impact his presence had on the rest of the attack, were about the only highlights of the match, unless you add in the fact that Braga weren't actually that overwhelmingly good, at least not as overwhelmingly good as Liverpool were overwhelmingly bad at times.

Nearly to a man it was uninspired stuff, with the midfield conspiring to turn invisible for most of the first half and Kyrgiakos having one of his weaker efforts of the season. The triumvirate of Lucas, Christian Poulsen, and Jay Spearing was a failed experiment very nearly from the get-go, with the latter struggling to assert himself and Poulsen struggling to not play like himself. As for the Greek, the penalty was bad enough, but he was far too eager to hoof and concede throughout the match, and he didn't instill much confidence. The rest of the squad fell similarly flat, with Raul Meireles having one of his more anonymous days, Dirk Kuyt doing his best David Ngog impression and living offside, and Joe Cole doing nothing to change anyone's mind about his place in the squad.

As usual, though, no sense in pinning the result on any one player, and Liverpool are going to have to do a hell of a lot better come next Thursday. No need for doom and gloom just yet, as they're more than capable of turning tonight's result around.

Have a nice rest of your afternoon everyone, and let's hope that better things are in store for Liverpool next week.