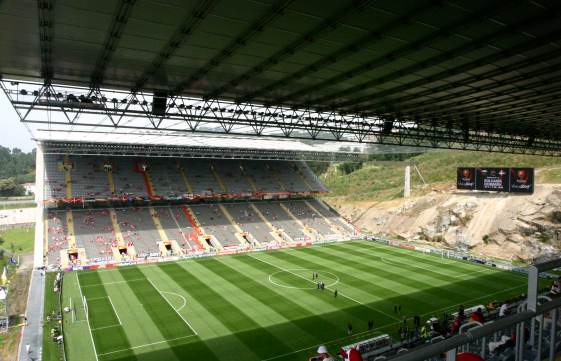 Match live on Five in England, 3e in Ireland, and GolTV in the US.

That attempt at a formation is me holding up my hands and saying "huh?" Both Christian Poulsen and Jay Spearing work their way into the squad, and with Lucas as the mainstay, Twitter is a shambles searching for the potential formation. Not that it's any different from any other matchday, but with three defensive-leaning central midfielders involved there's a bit more than usual. At the back we the get the scenario I mentioned but didn't see as likely---Carra at right back, Kyrgiakos and Skrtel middle, Johnson on the left. Front three(ish) as expected, though, with Cole, Meireles, and Kuyt responsible for things in attack.

Some random notes prior to kickoff...

** From the department of terribly written headlines, we get this glimpse into the mind of skinhead Raul Meireles:

“This is the English style. My first game, against Birmingham, I saw a photo in the newspaper and I was doing a cross and in the picture it looked like I did not have hair. So I cut it off. My daughter shaved it off. She is six. It is a little dangerous, but I trust her. I am happy with the job she did. It was not because everyone looks tough. I just did not like that photo. The weather, with the wind and the rain, is not good for your hair. I am better this way.”

Awkwardly worded headline aside, the legend grows with Meireles, who's cut a unique figure since his arrival. First it'st the tattoos, then it's the volleys, then it's the blue skinny jeans and sailor shirts, and now it's the importance of nurturing your hair in the harsh climate of northwestern England. I know it's hard to believe that the shearing abilities of his daughter could be less important than...anything, but apparently he also had some insight into today's opponent, or whatever. The more he talks, the more I listen.

** Steven Gerrard's road back to fitness is apparently less straightforward than we originally thought, or it at least contains a detour that bypasses international duty. From the Guardian:

The Liverpool captain has had tests this week and a decision on the best course of treatment is expected on Friday. The club's manager, Kenny Dalglish, has refused to rule out surgery for the player and should Gerrard have an operation he would be likely to miss the Wales game, on 26 March, and England's friendly against Ghana three days later.

"For us and for Steven it is a niggling problem that we've got to find a solution to," Dalglish said. "We will know better by the end of the week. By Friday we will know where we stand. Hopefully it is going to be cleared up and he'll be available for most matches. Everybody has got to be carefully managed, whether they are fully fit or slightly fit. We will know better on Friday. We won't speculate about anybody, especially Steven. It is a minimal problem but it is a problem that needs to be fixed. If we've got time to get it fixed we'll get it fixed."

So now we have fitness to add to the list of things about which we have an uncomfortable level of confusion; Noel sorted through the form side of things the other day, but now it looks as though developing consistency is a somewhat delayed project. Of course, there's always the possibility that the reason he was good against United the other day was precisely because he wasn't fully fit, and the club could continue to trot out a 65% Gerrard in a deeper role in central midfield, where his body simply wouldn't allow for the heylookitsanopenspaceishouldrunthereandforgetabouteverythingelse moments that get him (and the squad) into a bit of trouble. Either way, we should know more on Friday.

Kickoff in a few hours, and team sheets will be posted once they're available.