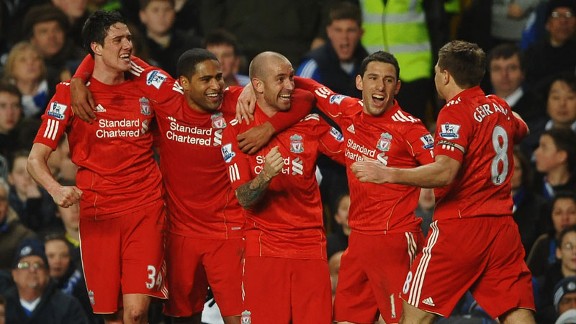 Kenny Dalglish and Liverpool impress again in a 1-0 win over Chelsea.

From Kenny Dalglish's midweek presser, in which he was asked about the impact of Fernando Torres' departure:

His words rang true yet again, as Liverpool got another great team performance, this time in spite of the near-suffocating coverage we had to endure in the build-up. It would have been easy to suggest that his words were just cover for a team in crisis without their star striker, but the display today proved beyond a shadow of a doubt that Liverpool are, in fact, capable of winning regardless of who they've got.

As was the case midweek, there was some head-scratching when the team sheet was released. Dalglish again elected to go with three at the back and five in midfield, with Jamie Carragher coming in for Sotirios Kyrgiakos and Maxi replacing Fabio Aurelio. Maxi's presence meant that Steven Gerrard played a bit deeper with Lucas, and Raul Meireles was able to again push forward in support of Dirk Kuyt.

Both teams seemed to struggle to find their footing for most of the first half---Liverpool in a slightly more defensive stance, to be expected, and Chelsea working to adapt to a new striker and a new role for Nicolas Anelka. It was clear from the outset that Liverpool knew what they were doing, as Jamie Carragher, Martin Skrtel, and Daniel Agger were on top of Didier Drogba and Fernando Torres, and, just like Noel proclaimed, Lucas was shadowing Anelka every step of the way.

The best chance of the half was obviously the one that fell to Maxi in the 33rd minute, and there's little point in trying to figure out how he didn't put it away. Glen Johnson's cross was deflected in the path of Steven Gerrard, and the captain sliced a low cross towards the far post and an unmarked Maxi. The Argentine side-footed the bouncing ball from two yards out, with nothing but the open goal mouth staring him down. And, inexplicably, it crashed off the crossbar. Hands on confused heads everywhere.

That missed chance didn't exactly inspire either side to push forward, but after the break Chelsea had the better of proceedings. They seemed to continually pile on pressure, with nearly everyone getting in the Liverpool box. Like so many times before, it seemed that Chelsea would get their goal eventually. Liverpool never broke, though, and they were able to regain possession that would eventually lead to the winner.

In the 69th minute, it was again Gerrard that was responsible for playing the ball into a dangerous area. This time he'd gotten down the right flank after an exchange with Martin Kelly, and he was able to sneak a cross around Frank Lampard from the corner. The bouncing ball into the box was ignored by Petr Cech, and with Branislav Ivanovic occupied by Dirk Kuyt, it was met by a leaping Raul Meireles, whose left foot crashed it past Cech. Bedlam.

From there it was hold on and hope, and Liverpool were able to do so masterfully. Chelsea again came forward in waves, but again they were unable to get a clear chance. Late substitutions from Dalglish saw both Fabio Aurelio and Christian Poulsen come on to strengthen Liverpool's resolve, and it proved to be enough as the final minutes slowly slipped away.

It'd be easy to write this one off as Chelsea performing poorly and Liverpool getting lucky, but I think that's lazy and dismissive of the effort that Liverpool turned in. Chelsea were poor because Liverpool were organized, well-prepared, and the better side. They weren't flashy in any area of the match, but they had a well-defined approach that turned out to be superior.

As I mentioned in the matchday comments, Jamie Carragher's return turned out to be better than expected---he had a few hoofs here and there, but for the most part he operated well as part of the three-man back line. While he got the plaudits and official MOTM, Lucas was once again quietly dominant, marking Anelka for the entire match and running tirelessly for the full 95-odd minutes. And Raul Meireles, the star man in recent weeks, got the goal that mattered and continued to shine in an advanced role.

But as has been the case, the effort of the team as a unit cannot be ignored. It's clear there's not only more flexibility in their approach, but there's belief in its efficacy. A new system with only its second run of the season could have spelled disaster today; instead, it proved to be the perfect way to negate the skill of a team that's nigh on unbeatable at home in the Premier League.

Words can't describe the range of emotions I went through today---from disappointment and apprehension in the pre-match to the rapture of the final whistle, today was one to remember. Kenny Dalglish and Liverpool came up big in a big match, and Liverpool move forward with renewed optimism. In less than a month, Liverpool's been completely transformed, with the change in attitude, belief, and performances giving us reason to celebrate. Amazing.

Enjoy the rest of your Sunday, folks.