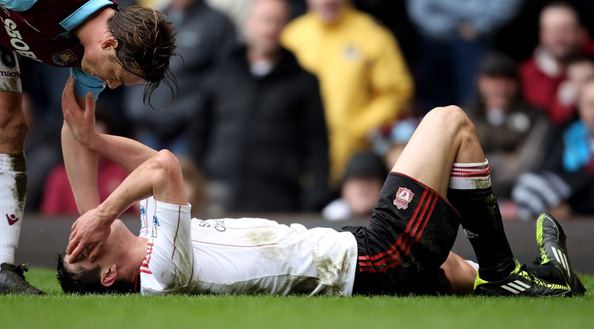 "Liverpool seem incapable of mustering any kind of meaningful attack. Having Andy Carroll up front in a game like this, that's what we need." So said Silent Bob in the matchday post.

Certainly I can understand where he was coming from, and with the wealth of quality comments lately I'd like to take some time at the end of the post to look at a few of the more noteworthy impressions passed along in the earlier match and post-match posts. Still, my biggest impression was and remains that sitting Steven Gerrard deep in midfield and pushing Raul Meireles forward into the most advanced central role continues to be an approach that doesn't help anybody.

In his recent run of form, Meireles' goals have often come arriving from late rather than as part of some neat interplay in the packed forward areas. His recent winner against Chelsea--set up by Steven Gerrard from a more advanced position, no less--springs to mind as a prime example. Most will also recall the brief run in the winter under Roy Hodgson where the central pairing of Lucas and Meireles was about the only good thing going for Liverpool on a consistent basis before Gerrard returned from injury and the Portuguese player found himself shunted back out to the wing and the club's performances dipped.

Then you have Gerrard, continuing to show his wandering tendencies against West Ham, tendencies that remain problematic when he isn't the furthest forward player in midfield and often leads to a numerical disadvantage in defense--a situation made worse by an over-reliance on high-risk, high-reward passes. Those iconic Hollywood balls are more forgivable in the final third--especially when he has a knack for pulling them off--but from deeper positions they hurt Liverpool's ability to retain possession and wear down the opponent, and on numerous occasions on Sunday they gave West Ham a short field to work with while Raul Meireles was stuck up with the strikers. Allowed to continue in some kind of central free role as a world class version of Charlie Adam, free to largely ignore the defensive side of the game, is a situation that remains puzzling, and it often leaves Lucas to cover the entire midfield while conceding possession in more defensively dangerous areas of the park. Moreover, it's not only that it aids West Ham's counter game when the ball is turned over closer to Liverpool's goal, but also that it lessens the reward side of the equation since even when the passes come off all it usually does is establish Liverpool in the attacking third, something that could have been achieved with a patient, low-risk short passing game.

Perhaps at one time Steven Gerrard's best position truly was in the center of the park, even if his best statistical seasons with the club have come on the right and directly supporting the striker, but in recent months his desire to play risky balls combined with a seeming disinterest in a solid defensive game and smart positioning have meant that when he joins the side he brings far less than he otherwise might. Certainly it's odd to look at the match statistics and discover that Gerrard had 49 successful passes in 74 attempts--a rate of 66%--while attempting only two tackles from a fairly deep-lying position, while Lucas completed 57 passes, clocked a success rate of 85%, and made six successful tackles--plus one unsuccessful attempt. Meanwhile, in his 49 minutes on the pitch even Raul Meireles attempted four tackles. At the same time, with possession often conceded in midfield and Liverpool slowly losing that battle to a fired up West Ham, the defense reverted to the long-ball game. After all, if trying to play it short meant having the ball come right back as often as not, one begins to understand why an already shaky defensive unit might have begun to launch it as far from danger as possible.

Having Andy Carroll up top might have made a better target for those increasingly desperate, aimless hoofs. But it wouldn't have helped Liverpool take control of the match and look any more like the at times slick, well oiled pass and move side that seemed to reach its zenith against Chelsea a few weeks ago. As at the end of January, the biggest problem against West Ham seemed to be that Steven Gerrard's current position isn't one that is especially good for the entire team, and from that one problematic piece the entire side ground to a halt.

As I said, though, that's largely an impression. A fairly accurate and fair one, I'd hope, but nonetheless an impression and rather difficult to support with pages of statistics in a sport that at times can still be resistant to easy number crunching. So in fairness to the impressions of others, and to spread the venting of spleen around a bit, a quick highlight of some impressions from the aforementioned matchday and post-match threads:

Just in case it looked as though I was using the earlier comment from Silent Bob as a springboard for a purely contrary argument, it should be pointed out that he also said, "Gerrard is having a terrible game. He should come off. No idea who should go on, but nevermind." So there's that, too.

"Really, if this goes the way it's looking, there should be no more rubbish talk about snatching 4th. Yes, we've come a long way since the dark days but we've got to keep this shit real!" That comes from Yann, and I think it's fair to say that after a few shaky displays where most of us just stuck our fingers in our ears and pretended everything was hunky dory, yesterday's was a wake up call that couldn't be ignored.

"Can't complain, the best side won. Had they not sat back on the 2 goal cushion, they could have had more. Carra and Skrtel need putting out to pasture. Wilson looks a little out of his depth at the moment. Gerrard didn't wake up until 20 minutes to go. Cole still can't do anything...

At least Suarez is showing he's good enough, despite the hacks saying he won't cope with the PL. Lovely turn for our goal. Lucas appeared to be on the up again, although still needlessly giving away free-kicks in dangerous areas...

I'm worried about Carroll starting now. Are we going to resort to long high balls to the big man all the time?

Tough but fair from Paul--though I would be remiss if I didn't point out that Lucas only gave away one free kick, which hardly seems out of line for the deepest midfielder--and others made quality comments that echoed his concerns about the defense, with Carragher and Skrtel both coming in for a pile of rightly deserved criticism even if they didn't always get a lot of help from the way the entire side was playing. In any case it was a tough day and a tough match, with lots of blame to go around, but I'll let Galahad close things out with a mix of optimism and realism:

Suarez is going to be a great Red. He's got skill and talent to spare. Even though West Ham frustrated him for most of the game, he still nearly scored a goal and had a beautiful assist to Johnson. He was a magnificent acquisition in the transfer market. Kudos to FSG, Kenny, and everyone else who made it happen...

Fans tend to be reactionary, especially me, so I'm trying to take a step back and be objective about this team. The more I think about it, the more I believe this is a rebuilding year for LFC. I think the Champions League is out (although the Europa League is still a possibility). I also think Kenny is the right manager for Liverpool over the long term (at least the next few years), but he's not the immediate savior I originally thought him to be. As much as I wish things were different, there is no quick fix for the Reds. With time and patience I think Kenny and FSG will bring this team back to glory, but it'll probably take another season or two before that happens.

Well, that's sobering. And we didn't even get into the whole Martin Kelly injury situation.