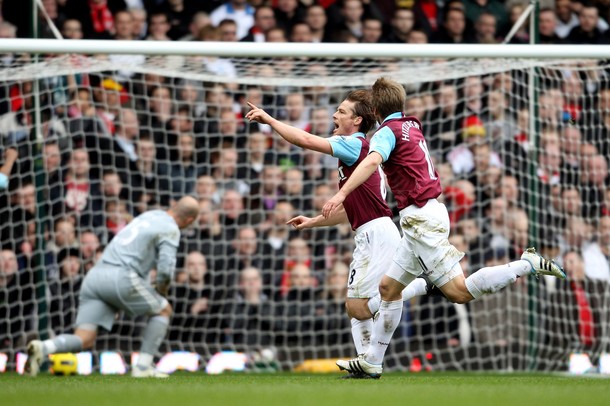 West Ham make it look easy and get a well-deserved three points.

Planning to return later to post a full recap while I finish some assorted errands throughout the day, which will now hopefully double as a stress-reliever and anti-depressant. Just very, very poor from nearly all involved on the Liverpool side today, it's exacerbated by injuries to Martin Kelly and Raul Meireles, and it's a continuation of a general decline since the win at Stamford Bridge. Lacking in spirit and execution once again, Liverpool earn a disappointing result.

Among the few positives on the day were the glimpses we got of Luis Suarez's potential (including the brilliant turn that led to Liverpool's only goal), a sturdy performance on both sides by Glen Johnson, and the play of Martin Kelly prior to being forced off with what looks like a fairly serious hamstring injury.

Those were all more or less wiped away by West Ham's wire-to-wire dominance, though, and the play at the back was among the worst we've seen all year. Martin Skrtel continues to be more down than up and was a major conspirator in two of West Ham's goals, and after a nice start to the match Danny Wilson had a pretty tough time. Steven Gerrard also had a bumpy display, misplacing 20 passes on the day, and the midfield on the whole seemed to struggle to assert themselves in a match that saw Liverpool get overrun in nearly every aspect.

All in all, though, it wasn't the shortcomings of any one player today---this was a collective loss in every sense, and West Ham were clearly the better side.

Off for most of the day and back later with some expanded thoughts. Hope you all have a good one.