Share All sharing options for: Liverpool 1 (1), Sparta Prague 0 (0): Squeezing By 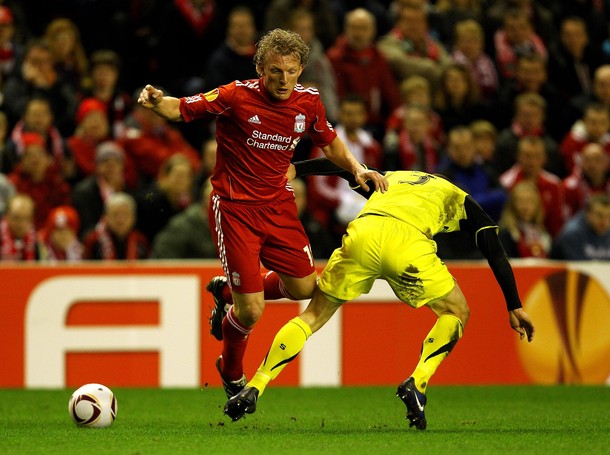 Dirk Kuyt is once again Liverpool's hero as they move on in Europe.

While this one wasn't as much of a struggle to watch as last week's, it certainly wasn't pretty, and there's plenty of negatives to go along with the positives. It's great that Liverpool are moving on, but there's potential that their progress came with the cost of losing Martin Kelly and Daniel Agger once again in addition to the growing worry about Liverpool's depth beyond the first-choice eleven.

Sparta deserve loads of credit for the way they approached today's match---they took it to Liverpool time and again, and the thought that they were going to simply park the bus was quickly dismissed. They had the better part of the opening minutes after Liverpool had a penalty shout in the first minute, and for most of the first half and for extended spells in the second half they were the better side. The Czech side succeeded in making Liverpool work and made things plenty nervy, and they'll likely leave feeling they had just as good a chance to progress.

The match was chippy on the whole, and some shaky refereeing certainly didn't help either side get settled; four players were booked in a choppy first half, and three more followed in the second half. This really had nothing to do with the way things ended up, but it was a noticeable interruption at times and, when combined with the style of play, served to make for a relatively unsettled performance for both sides.

Even with Liverpool conceding more possession than they'd have preferred they had their chances---I mentioned the missed handball in the opening minute, and Sotirios Kyrgiakos had a header pushed away in the 16th minute. Joe Cole had a handful of half-chances as well, but seemed either a step behind or directionally confused, as he was whiskers away on a few occasions and placed a clear header on its way towards the corner flag.

The best chance of the half fell to Raul Meireles, and it was one that you'd have bet on him taking. Martin Kelly once again got himself free down the right and lofted a cross to the middle of the area, and an onrushing Meireles pushed it over the bar. Given his form in the past few weeks, a disappointing miss, but also an understandable one given the elbow he took in the back of the head.

Kelly went off at the half and Jamie Carragher came on, a noteworthy change not only for the worries about Kelly's fitness, but also because it saw Carragher become the British record-holder for appearances in European competition. Regardless of the competition it's a fantastic achievement, and he marked it with another solid performance.

Much of the second half was similar to the first---some back and forth with a few chances here and there, an injury for more than one of Liverpool's defenders, and we were made to wait until late for the winner to come after a chance for David Ngog in the 74th minute went begging. Raul Meireles, who'd been terrific with his set piece delivery all night and was responsible for Ngog's chance earlier in the half, found an unmarked Dirk Kuyt from a corner, with the Dutchman only yards in front of the goal mouth. Kuyt cooly headed home, and the combination of relief and excitement was almost a solid.

From there Sparta never threatened, and the newly-opened match gifted Joe Cole with a chance on the break late only to see the effort go wide. It also saw Cole doubled over for the rest of the match, as clear an indication as any that match fitness is a future-bound concept. In the end, though, it meant Liverpool advance to face the winner of the Lech-Braga tie, which is level on aggregate at the time of writing.

As I noted above, the joy of progress is somewhat stunted by another display that left us wanting more. The concern about depth in quality will be addressed relatively soon---Steven Gerrard returns from injury, Luis Suarez will obviously be eligible for domestic matches, and hopes are pinned on Andy Carroll to make his debut and an instant impact up front. David Ngog has been scarce of late, and part of his struggles today have to be attributed to that, but displays like today's aren't going to win him many fans, particularly at a time when patience is at a premium.

The injuries to Martin Kelly and Daniel Agger create even more concern, as both have played a pivotal part in Liverpool's success at the back of late. Kelly's been a mainstay on the right since Dalglish arrived, playing beyond his years and giving Dalglish options none of us really knew he had. The chronic nature of Agger's fitness worries are both discouraging and disappointing, as he'd spoken at length prior to the match about being back for good. Hopefully he's able to make a quick recovery, as his absence has been one that has had a profoundly negative impact on the side.

Overall, not really a time to be too downtrodden, but there's nothing from today's match that leaves me incredibly excited. It was still a ways away from the performances we'd enjoyed prior the Wigan match, and it was still a stark example of where Liverpool need improving. Plus, Christian Poulsen. But we did see another relatively classy display from Meireles, we saw Cole spark a bit towards the end (especially when David Ngog robbed him of a late chance), Kuyt pop up to remind us he's still one of the club's best clutch goal-scorers, and Kenny Dalglish's first European victory.

And there was this pre-match (thanks Justin). So all-in-all, even with plenty left to improve, a day that moves the club forward in more ways than one.