A Fenway Friendly, Contract Renewals, and Other Sunday Notes

Share All sharing options for: A Fenway Friendly, Contract Renewals, and Other Sunday Notes 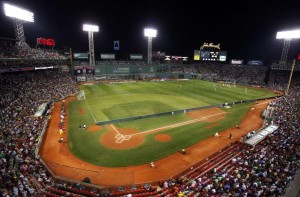 As expected, yesterday turned out to be a relatively uninspiring day on the football front---Everton got through on the back of a fantastic Tim Howard performance and a brilliantly-struck Leighton Baines free kick late in extra time, but other than that we didn't get much for the neutral. To compound matters, Crawley Town went out and got the worst of the worst to sponsor their shirt for the match at Old Trafford, erasing any chance that Liverpool supporters could swing behind them. Only positive ended up being that it was a great way to advertise the "Don't Buy the S*n" campaign.

So now it's almost time to close down the weekend, with a handful of matches underway or yet to be played, and more to follow tomorrow afternoon before the week gets rolling with more Champions League action and the return leg of Liverpool's tie with Sparta Prague. Typically I'm not one to wish away the days, but with no matches for Liverpool and waiting for some big personal news this coming Friday, the end of the week can't come soon enough.

Thankfully today there's a bit more to report on the Liverpool side of things to get through:

** I suppose it was inevitable that we'd get some Liverpool/Red Sox crossover action (besides ill-conceived t-shirts lacking in creativity), so yesterday's news that a friendly could be coming to Fenway Park wasn't all that surprising. For those of us stateside it's great news---Liverpool's senior squad haven't been in the US since their 2004 tour, in which John Arne Riise gave birth to one of the more embarrassing commentary moments in recent memory. That aside, a return to the States with NESV/FSG backing was probably only a matter of time, and with recent preseason jaunts heading to other parts of the globe, it'd make sense to see Liverpool in action in the US in the near future.

** There was a brief moment of joy yesterday when I read the headline, "Reina and Kuyt Set to Pen New Kop Deals," and then I realized it was in the Mirror, and I felt much shame, and then I felt even worse when I found out that the Mirror was borrowing from the People, because it was probably more likely that both would be leaving Liverpool by Thursday than actually working towards new deals.

So today's news on the official site is of the confusing sort, as it confirms that Dirk Kuyt is actually working towards a new deal and proclaiming that he's tied to Liverpool for the future:

"My contract has one more season to go after this but there are things happening. We have had some talks and I can only say it looks positive. I feel at home in Liverpool and I don't want to leave here.

"It has been a difficult time for everyone at the club with the changes that have happened since last summer but now I can sense something good is happening - I think Liverpool are on the way back."

This opens the window for a) debating about whether or not you actually want Dirk Kuyt to continue at Liverpool for years to come; and b) hoping that Reina's in a similar spot. As for the former, I'm all for Kuyt sticking around longer and being a part of the squad, but I'm also hopeful that it doesn't deter from the club going after reinforcements come the summer transfer window. I know there's split opinions on how Kuyt should fit even in the current squad, so it's likely that those among us who don't have much time for him now probably won't be lighting off fireworks at the news. Regarding the latter, though, I think we can all agree that any movement towards locking Reina in for good is a positive step.

** Stepping a bit closer to the edge in terms of speculation, there's been talk in the past few days about Alberto Aquilani and a possible return to Liverpool. Aquilani kicked most of it off on Thursday by commenting on the uncertainty about whether or not the asking price will be met by Juventus, and since then he's gone from "absolutely won't return" to "probably still won't return but there's a glimmer of hope particularly when you've been drinking." It's not completely unlikely, but I think getting set on his return would be a bit much at this point. Maybe Kenny Dalglish's return makes it closer to being within the realm of possibility, maybe not. Either way, we can agree that Christian Purslow should be drawn, quartered, and forced to watch Lucas compilations on repeat.

That's about it for the weekend, so hopefully you're all able to enjoy what's left of it. I think we can all look forward to a quick week and Liverpool getting back into the swing of things for a brief spell---three matches in the next two weeks is all that's promised, with Manchester United's visit and the trip to Sunderland the only matches on the books at current for the month of March. Success on Thursday will obviously boost that a bit, but it's another relatively lean month once the next two weeks have passed.