Share All sharing options for: Liverpool 2, Stoke City 0: Catastrophe and the Cure 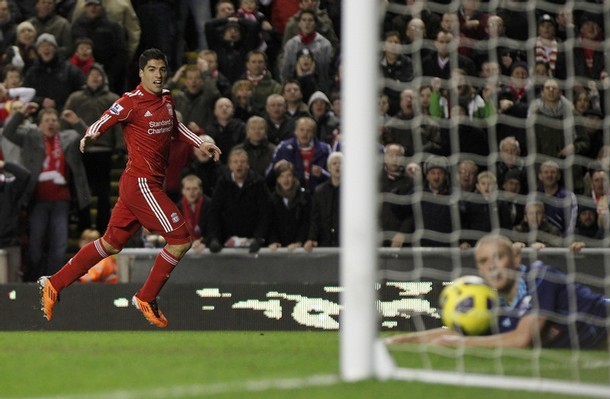 Liverpool get a terrific team performance and beat Stoke 2-0.

Well that felt good, didn't it?

We knew coming in that Liverpool were going to have to put in an all-around performance today, seeing as Stoke are one of the more challenging and relentless sides in the Premier League. We knew that there was going to be plenty of discussion about how Liverpool would fare after Monday's comings and goings. We knew that, while it wasn't necessarily decided today, the new-look Liverpool's future sort of kicked off today.

That new look was really the only topic of conversation in the build-up---not necessarily who was here and who wasn't, but more so wondering aloud how the hell Liverpool were going to line up with a starting eleven that included six defenders and five midfielders. The trust in Kenny Dalglish never wavered, but the selection more than piqued my curiosity.

You could tell early in the first half that the squad were coming to grips with the different approach, even if, as Noel pointed out in the matchday thread, they weren't tasked with any responsibilities completely foreign to them both collectively and individually. Sorting it all out proved to be the most challenging, as Martin Kelly and Glen Johnson hamstrung themselves a bit in a quasi-wingback role, the midfield four of Steven Gerrard, Fabio Aurelio, Lucas, and Raul Meireles each did a bit of roaming, and Dirk Kuyt familiarized himself with an old role.

There were a few isolated chances before everything started to come together, and a Sotirios Kyrgiakos' header from a Steven Gerrard corner that had to be cleared off the line was the most notable. It didn't exactly signal Liverpool's intent, but around the half-hour mark the squad started to flex some of their influence. Kuyt's hold-up play and distribution started to pay off, and the best chance of the half came after he played Martin Kelly down the right side deep in Stoke's area. Kelly's cross found Glen Johnson in front of goal at point-blank range, and were it not for Asmir Begovic's fantastic reaction save, Liverpool would have had their opener.

The last fifteen or so minutes of the first half saw Liverpool flow forward in numbers, with Daniel Agger, Martin Skrtel, and Sotirios Kyrgiakos all pressing near the halfway line. That midfield four took their turns racing into the box, led by both Steven Gerrard and Raul Meireles, and they were stabilized by Lucas and Aurelio a bit deeper. The halftime whistle came at a perfect time for Stoke, as it truly seemed like a matter of time before Liverpool scored. Kenny Dalglish's tactical adjustments had started to pay off, and Liverpool were well and truly the better side.

They more or less continued into the second half, and they quickly had the opener. Steven Gerrard's free kick knocked around into the area, and after Kyrgiakos knocked it off Robert Huth the ball fell into open space in the Stoke penalty area for an onrushing Raul Meireles. The Greek did well to stay out of the way, and Meireles crashed home with his left foot to give Liverpool the lead. It was the midfielder's third goal in four Premier League matches and more than deserved for Liverpool's growing dominance over the first 47 minutes of the match.

Credit to Tony Pulis and Stoke after that goal, as they made changes and started to exert their influence on the match. It never really resulted in sustained pressure, though, and the visitors only forced Pepe Reina into one save on the night.

That chance came after the debut and goal of Luis Suarez, who came on to much fanfare and adulation from Liverpool supporters in the 63rd minute. The opening touches were, as expected, a bit nervy, but he gradually started to set himself apart as he found his feet. His(?) goal came as a result of an instinctual break and an absolutely dynamite ball from Dirk Kuyt, and while it wasn't the prettiest of efforts, you figure he's got to be credited with it. Rounded Begovic and scuffed it on goal, and Andy Wilkinson couldn't clear, and it was rapture at Anfield. The goal was made even better by the shots of Andy Carroll and Damien Comolli celebrating in the stands, with the former grinning from ear to ear and the latter high-fiving anyone in sight.

From there it was somewhat of a formality, which is something Liverpool haven't had much of a chance to experience this season. The aforementioned save from Pepe Reina was really the only event of note after Suarez broke his duck, and it was Liverpool's third straight Premier League, the first time this season they've achieved such a feat.

I don't know that enough can be said about the changes made by Kenny Dalglish and the side's willingness to adapt. Three at the back was a move clearly tailored to the opposition, and it proved to be genius. Stoke were neutered for most of the match, stymied at nearly every turn by a resurgent Sotirios Kyrgiakos, a steadied Martin Skrtel, and the top-class Daniel Agger.

They weren't alone, though, as Liverpool both defended and got forward as a unit. The early inconsistencies gave way to a fluid, confident performance, and Liverpool continued their recent progress. Lucas again deserves picking out for the usual reasons, but I was also plenty impressed with the performance of Dirk Kuyt up top and Steven Gerrard and Raul Meireles in the midfield. Kuyt showed more than enough strength and guile as the lone forward man, and the partnership of Gerrard and Meireles has the potential to give the opposition fits. That Luis Suarez scored on his debut only sweetens an already terrific night.

In the end, I think it's safe to say that we got exactly what we had hoped for from Liverpool. They never showed panic or doubt despite the events of the past week, and they've continued the revolution of recent weeks. It's almost impossible to compare this Liverpool with the one we saw months ago; there's passion, commitment, and a feeling that there's only more to come.

Hope you all were able to enjoy the match today---no doubt this weekend is going to get a little nutty, so for now let's just enjoy the result.