Daniel Agger Can Read Your Mind and Other Friday Notes

Share All sharing options for: Daniel Agger Can Read Your Mind and Other Friday Notes 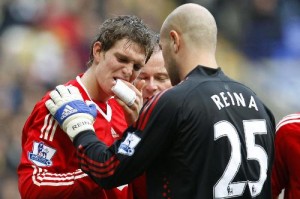 Whether he's headbutting goalposts as a way to pass 90 minutes, hammering in a thirty-yard bullet, enforcing renegade justice at Stamford Bridge, attempting to ink squad members as a rite of passage, or waxing poetical about the glories of playing the ball along the deck, odds are that at some point during his Liverpool tenure Daniel Agger has left you hoping that there's plenty more to come.

So his latest offering shouldn't be a surprise.

As always, the quotes should be taken with a grain of salt on the chance that they were mixed up in translation or taken out of context or have been deemed too honest for FA-sanctioned ears. For now, though, let's just enjoy:

On Fernando Torres' Move to Chelsea:

"I suppose Liverpool got a lot of money for him and, if the player doesn't want to be there any more, there is no reason to keep him. I should say I think everyone at Melwood liked him and still do, because he is a good guy and we wish him all the best in a blue shirt – except against us."

On Torres and Liverpool's First-Half Form:

"That is a big question, isn't it? How to explain that ... Look at the team – we played awful, we were shit. And he is a part of the team. When every element of the team plays well, he plays a lot better. It is the same for everybody – for me, for Stevie [Gerrard], everyone. When the team are performing, look at every single player and he is playing better. But when we are losing, everybody is on top of us. Everybody is playing poorly."

"A big part of it is down to Kenny and [the coach] Steve Clarke. They have made a major difference. But it is also something to do with confidence, because we are the same footballers. Confidence can win games and, somehow, Kenny and Steve have put the confidence back into the players. It is looking good, but there is still a long way to go."

I'm less interested in the Torres stuff, because I think we've all moved on from the denial, shock, loathing, self-loathing, confusion, and rapture the past two weeks wrought. What's much more interesting for me is the candid assessment of the squad's play during the first half of the season. It's nothing we didn't already know---"Liverpool are shit" was basically the only way you could leave a comment around here and expect to have any credibility. But it's mostly just nice to hear someone around the club own up to that fact rather them hem and haw about being nice and things being unfortunate and whatnot.

Quotes aside, probably goes without saying that Agger's resurgence has been one of the better results of Kenny Dalglish's return. The Dane had his share of injury problems during the first-half of the season, but even when healthy it seemed like he was never a part of the plan. For me, if he's fully fit he's one of the first names on the teamsheet, and it's nice to see that he seems settled under Dalglish.

Anyhow, a few other brief notes worth mentioning prior to the preview for tomorrow's match with Wigan at Anfield:

* By now I'm sure you've all heard the news about Jonjo Shelvey---out around 12 weeks with tendon damage in his knee (probably the left or the right one). Sad stuff for the young Englishman, who, with six straight appearances off the bench, has seen plenty of time under Dalglish. The return of the Europa League was always going to mean more playing time for him, so both the timing and the length of the injury are unfortunate. As usual, hoping for a quick and complete recovery, and in the meantime we'll see what this means for the rest of Liverpool's burgeoning starlets.

* Other injury news involves Steven Gerrard and Martin Kelly, both of whom were in the running for Martin Samuel's dreaded "dodgy cry-offs" label. Looks like Gerrard gets a stay of execution from the no-necked scribe, as the captain is still a doubt for tomorrow's match. No such news for Kelly, but there is the modest proposition by Stuart Pearce that no domestic matches take place on Sunday so as to allow for increased match fitness of the U21's. To which I modestly propose that Stuart Pearce, the FA, and U21 and senior squad friendlies be banished into the wilderness.

* If you're not in the US you likely missed the Fox Soccer pre-match blowout extravaganza on Sunday, wherein they talked about the upcoming match, gave things to watch for, and provided their predictions. If you're not in the US you probably also call that normal pre-match coverage. Wherever you are you can call it painfully awkward, as stupid men in nice clothes shared opinions about how funny it is that two sports are called "football." The highlight of the hour-long Super Bowl promo was Keith Costigan's interview with John Henry, who may or may not be a middle-aged lesbian (look out, Bert van Marwijk), and you can find that at the end of the post. You've probably already read the quotes in some capacity, but worth a view if you're so inclined.

Quick breather until the preview goes up in a few hours---thanks to everyone who's been so involved in the past few days as Noel keeps this thing moving forward. These weeks are typically the most difficult from a blogging standpoint, and I think we can agree that it's been quality as usual. That is, unless you think Lucas is a sideways-passing, oxygen-hogging, good-for-nothing waste of space, in which case you're probably still Googling "FOOTBALL MEGASTARZ SEXXXY" to find other players that he's not quite as good as. Kudos for your tenacity.