This is Your Brain on the Media, and Other Friday Notes

Share All sharing options for: This is Your Brain on the Media, and Other Friday Notes

It's refreshing to find out that reality's not actually a thing worth acknowledging, as the narrative carrying the day focuses on the fact that Kenny Dalglish is now Rafa Benitez, because who in their right mind would use actual evidence to back up a statement that a decision by a governing body known for not entirely correct decisions might not actually be entirely correct?. And further, who tries to convince people with something other than unearned good-graces that have gradually turned to sourpuss displays at the mere suggestion that the team you're managing might be worth asking questions about?

* Kenny Dalglish is probably a bastard to interview. Most of the time he's curt, sarcastic, and generally elusive, even with questions that mostly seem benign. And as Liverpool supporters, we pretty much soak it up, even if we recognize that he's being slightly more difficult than he needs to be. Rare is the occasion that you watch a complete Dalglish presser and walk away feeling like you've actually gotten the substantive answers that lurking on Twitter makes you entitled to.

So naturally, when he actually uses something that happens to break away from the coyness that's marked so many of his interactions with the press thus far, it's worth demonizing and dismissing as no better than a nigh-on schizophrenic rant by a former manager. Or maybe something worth paying attention to. But not if you're the Guardian:

Two years ago it was Rafa Benítez with his folded sheet of paper containing various "facts" about perceived Liverpool grievances. On Thursday in the same room Kenny Dalglish went one better, with a DVD display illustrating why Liverpool were more sinned against than sinning at Fulham on Monday, a match that earned the club a double dose of disciplinary trouble from the Football Association, with Luis Suárez accused of making an offensive gesture to home supporters and Liverpool charged with failure to control their players following the dismissal of Jay Spearing. "If anyone wants to see the truth it's on the screen," the Liverpool manager said.

Normally I'd link to the goods, but for now I'll just encourage you to go to Google and type in "Suarez", "Dalglish", and "Clusterfuck reporting". Case closed!

But really, the facts is the facts, and while it's a slippery slope to the tin-foil hat wearing crew, it's undeniable that there's something less than a love affair going on between most of England's major media outlets and the northwest's most successful club. It's ludicrous to discount a very credible effort from Dalglish to illustrate that there's not exactly a war on inconsistency being waged by the FA, and it's even more crazypants to allude to their own previous mockings of a Liverpool manager from the past.

* More importantly, as we head towards the preview, we had a reader submission earlier in the week that's plenty timely---Kevin emailed us with his thoughts on how Liverpool cope without Lucas and Jay Spearing in the starting eleven. It's unfortunately a question that increasingly needs asking, as news came out yesterday that the club weren't planning on appealing Spearing's three-match ban. Turns out it's a waste of time for the FA unless a player maliciously Cobra-Kai'd the opposition from behind.

To start, Jordan Henderson has shown clear ability in the middle of the pitch. While Charlie Adam's work rate and fitness have improved, I still wouldn't trust him and Henderson as a defensive force. Glen Johnson and Jose Enrique will add extra attacking options playing further up the pitch, but won't run into the problems that were discussed about Johnson playing at the wing. It can't be ignored that two of the big goals of the season have been a direct result of those two (Enrique's assist away to Everton, Johnson's goal at Chelsea)---additionally, Enrique's left foot seems to be the only one that can find Carrol's head (or foot for that matter), as their time together at Newcastle has shown signs of potential chemistry. 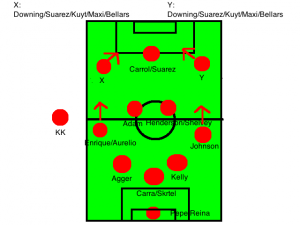 Jamie Carragher would not have to cover as much ground if Daniel Agger and Martin Kelly were beside him, but without Lucas the defense could lose that organization and marshaling factor that Carragher brings. However, Martin Skrtel could play for either him or Kelly considering his superb form this season. It also can't be neglected that part of the reason for the draws this season might be that missing push forward. Steven Gerrard's heart (and his groin) provides it, Carragher provides it, and with both those missing from the squad, there seems to be less of a driving force.

Lastly, Andy Carroll clearly has the goods, as he's increasingly more mobile, and he's been getting good chances. Essentially, Henderson must play in the middle, while Jonjo Shelvey can spell either him or Adam, and as we've seen (last season at Craven Cottage), he can play quite a through ball. Wing backs pushed further up the pitch enable more width if pass-and-move, along with inverted wingers, were used at the top of the pitch.

At this point there's not really any telling how Dalglish and company decide to line up at the weekend, and it's not as though we can pretend that we've had a clue at any point during his tenure anyhow. The best we can hope for is a side that's going to take the match to QPR and force the issue; that's been the desire all season long, and while finishing has been the major hangup, there's always the hope that a slight tweak, as Kevin suggests, might prove to be the solution.

That's it until the preview later on today, unless you suddenly realize that Liverpool are just a bunch of whiny conspiracy theorists who haven't won anything in awhile. In which case, go Arsenal! You guys are way even-keel and admirably level-headed and we've all forgotten how much self-harm you guys engaged in earlier this season.

Speaking of martyrdom, who else has abs that transcend space and time? Why, sexy Jesus of course: