It was a match that Liverpool should have won, if only they'd taken their chances. If only the officials hadn't overturned an offside Luis Suarez goal that wasn't. If only Kevin Friend hadn't given Jay Spearing a questionable red card or if only he had awarded a penalty and not a free-kick when Charlie Adam was felled as he entered the sixteen-yard box. If only the posts Liverpool hit twice had seen the ball deflect into the back of the net things would have been different, too, though of course if one were in the mood to consider maybe and what if, then Fulham too could point to their own missed opportunities. Opportunities like the one they had less than six minutes into the match, when a well-worked move probably should have ended in a goal for the hosts. 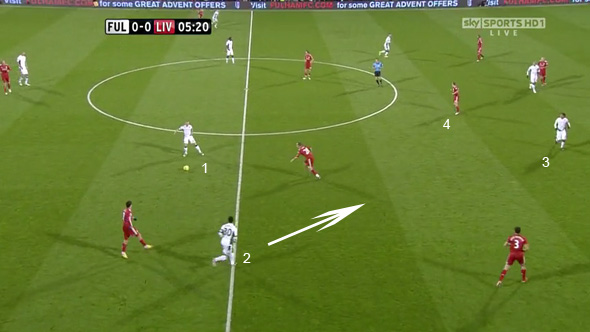 Danny Murphy (1) receives the ball from Dembele (2), free to roam throughout the match and at the moment taking up a position on the right with Bryan Ruiz (3) moving up top to support Zamora. Dembele continues his run inside while Charlie Adam rushes out to meet Murphy. Luis Suarez, playing on the wing, doesn't track Dembele inside, leaving Jay Spearing (4) to pick up the run with the centre backs occupied by Ruiz and Zamora. 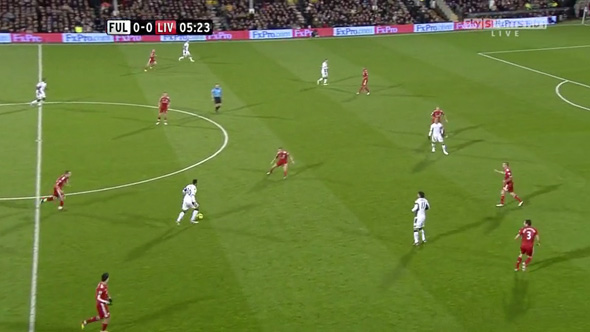 As the ball is returned to Dembele, Liverpool seems well equipped to deal with the immediate threat of Fulham's attack, outnumbering the immediate attackers and with Charlie Adam returning to the defensive zone in support. 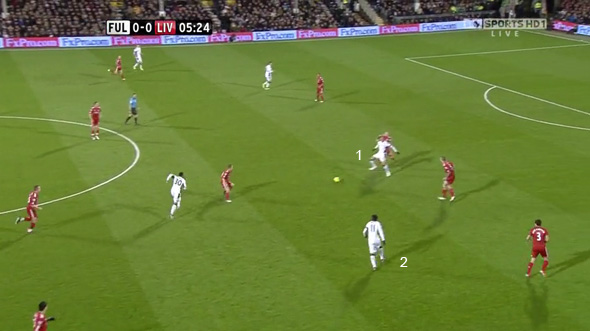 Dembele moves the ball quickly to Zamora (1), who touches it off to Ruiz (2). Agger and Enrique watch Ruiz while Skrtel stays on his man, ensuring that Zamora doesn't have the opportunity to spin off him, searching for a return ball and clear run at goal. 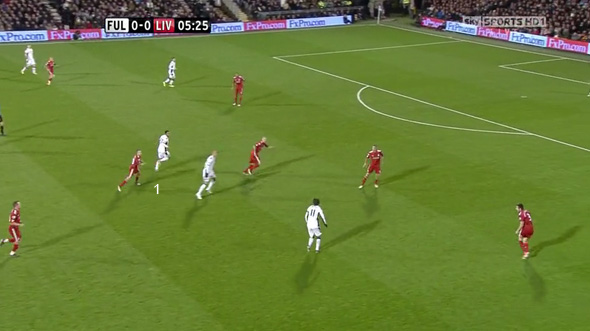 Spearing, unfortunately, is caught watching the ball as it heads to Ruiz, actually coming to a full stop while Dembele continues his run (1). With Skrtel pulled up the pitch marking Zamora, it leaves acres of space for Dembele and an easy pass for Ruiz. 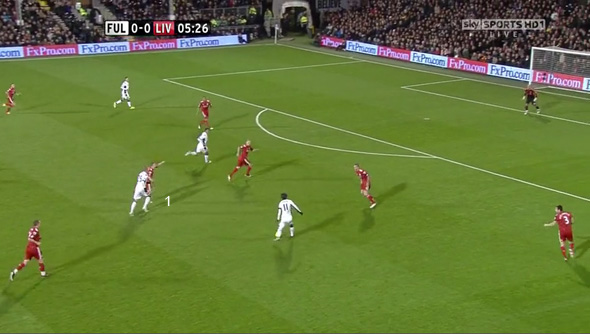 Spearing points to the man he had been covering seconds earlier (1), but it doesn't help Skrtel, who has to change direction in an attempt to catch up with the free-roaming Dembele in full flight. Luckily for Liverpool—and fortunately for Spearing—Dembele doesn't manage to beat Reina on the ensuing chance.

Fulham's clearest chance of the first half coming as a direct result of the man tasked with filling in for the injured Lucas Leiva failing in his duties didn't bode well for the rest of the night, though in the end it would instead be a much more simply worked goal that did in the visitors, with Pepe Reina partially clearing a corner only to see the ball come straight back at him. 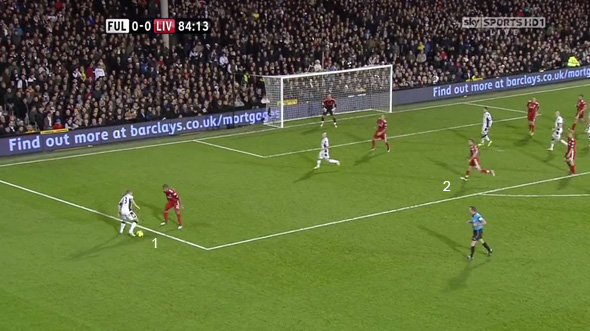 Before Liverpool can reorganise from the corner, the ball is sent out to the right footed Danny Murphy on the left (1). Jordan Henderson, jogging back, is the nearest support player (2), but he leaves Johnson to defend Murphy one on one and covers against the pull back. 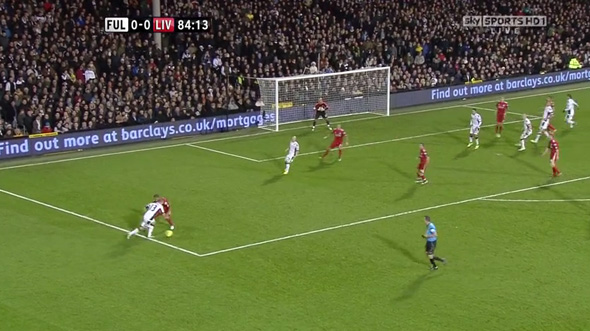 Murphy dips his shoulder to the left and Johnson bites, shifting his body weight onto his right foot as he prepares to block off the outside. Murphy, however, moves straight ahead, around Johnson and onto his stronger foot. 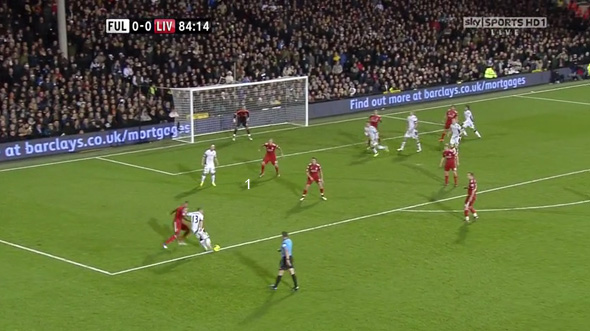 Johnson recovers, but not in time to stop Murphy from getting a shot off. Meanwhile, Agger and Skrtel are left outnumbered in front of goal, still deep from the corner and with three men to worry about. With Skrtel focusing on the man in front of him, Andy Johnson (1), that leaves Agger with two men to worry about. 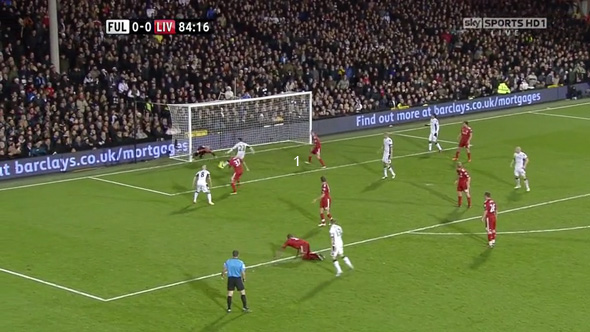 If either defender is to recieve any blame for the goal it is Agger (1), who allows Dempsy to pass in front of him, choosing to defend space instead of following the most dangerous man in it. And, of course, on most nights the initial shot is stopped and held by Reina, and nobody remembers the passage of play five minutes later. On this night, a rare lapse by the Premier League's best keeper on the back of earlier errors means three points dropped.

Here, Johnson made the key, initial mistake that was at the root of Fulham's goal. He also made the mistake that is hardest to explain away or excuse. In their ways, Reina spilling Murphy's shot and Agger choosing to ignore Dempsy's run across him may both have been bigger errors, yet for the normally sure-handed Reina it is easy enough to write it off as one bad moment while Agger's mistake came about from being faced with two men to mark. He made the wrong decision, but it was a wrong decision made in a more difficult circumstance than Johnson, who instinctively bit on Murphy's fake to the outside and gave the Fulham captain the inch he needed to move inside onto his stronger foot and get a clean shoot off.

However, the biggest culprit may in fact be poor set-piece defending, with four Fulham players around the six-yard box and only three Liverpool defenders to mark them after the partial clearance left Liverpool's defenders scrambled and ill-prepared to stop Fulham once Johnson flinched. Whose fault exactly it becomes then is nearly impossible to know for certain for anybody not involved in training, though with Dirk Kuyt, Jordan Henderson, and Charlie Adam all looking on with no man to cover it's not a stretch to think that any one of them being more aware of the threats could have led to things turning out differently for Liverpool.

If one had to assign blame, then Kuyt, most central of the three and seen in the early shots watching the ball more than the Fulham players near to him, would seem the most likely choice to add to Johnson, Agger, and Reina in the list of players who all should have done better on the goal. As is so often the case, then, a team effort. If anything, however, it is Fulham's earlier chance that is far more worrying in the long term, as on that occasion it was almost entirely the fault of Jay Spearing. With the assured Lucas out for the remainder of the season and no chance of reinforcements until January, such an error is one more reason—if any were truly needed—to fear points will be lost through an inability for the club to compensate for their missing holding midfielder.