Fulham 1, Liverpool 0: No Luck, No Finishing, No Fun

Share All sharing options for: Fulham 1, Liverpool 0: No Luck, No Finishing, No Fun

Same old song and dance for Liverpool with a questionable sending-off and a Pepe Reina error to spice things up, as the hosts get a late winner and the wasteful guests spend most of their possession not finishing chances. Posts were hit, fouls weren't given, upper hand was wasted. Frighteningly and frustratingly familiar for the Reds, who now go from nibbling at the edges of the top four to needing a run of results to get themselves back in the hunt. Not season-defining by any stretch, but part of a pattern that we're all too used to.

For the first time in recent memory, a leaked team sheet turned out to be accurate; it found its way out around half an hour before kickoff, accompanied by a collective uproar that Maxi had been left out again after another good display against Chelsea. With a return to the first-choice backline from recent weeks, the biggest questions were left for the midfield and attack, with Jay Spearing, Charlie Adam, and Jordan Henderson starting in midfield, and Luis Suarez, Andy Carroll, and Craig Bellamy starting together up front for the first time this season.

As it turned out, Liverpool would start in something resembling a 4-3-3, with Henderson and Adam either side of a deeper-lying Spearing, and Suarez and Bellamy flanking Carroll up top. And early on it looked to be paying dividends, with the guests getting the better of possession and finding their way forward patiently. Fulham darted in with a chance through Bobby Zamora, whose threaded ball found a streaking Dembele, but Pepe Reina came forward well and cleared any danger. The Liverpool response was encouraging, as they quickly pieced together a counter attack, and a cut back for Andy Carroll from Luis Suarez on the left gave them their best chance of the opening minutes.

It would continue this way for most of the first half---possession for Liverpool, Fulham stealing a chance here and there, neither side looking particularly sharp. Jordan Henderson's driving run and curled effort off the post was the pick of the lot, and around the time of Suarez' second cut-back for Carroll it looked like only a matter of time before Liverpool scored. A brief spell of Fulham pressure rounded things out before the break, though, and both sides failed to piece anything meaningful together as the half wore down.

The opening minutes of the second half were marked by a strange incident between Clint Dempsey and Craig Bellamy, as the American was incensed after Bellamy tackled from behind. It was never an illegal challenge and didn't look like there was much in it, but the resulting confrontation left both players with a yellow card. Dempsey was the clear instigator, leading with his forehead and making sure he stayed in Bellamy's face, but, as was the case all night, Kevin Friend left us scratching our heads. 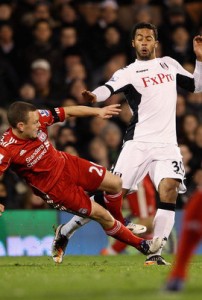 Liverpool had a share of chances shortly after, first with Jose Enrique volleying an effort straight at Mark Schwarzer from a corner, and then with Charlie Adam dragged down just outside the edge of the area. Daniel Agger's header went wide from the resulting corner, and Craig Bellamy dragged a shot wide after being played in by Glen Johnson. Jose Enrique's chipped ball for Luis Suarez rounded off the dangerous spell for Liverpool, as the Uruguayan did wonderfully to get past Schwarzer and finish before being ruled offside. Replays would show it was very close, and probably incorrect, but you know, fuck.

As Fulham started to press, they'd get one of the nuttier decisions of the day---Jay Spearing's clearance involved a follow-through, and when he lost his footing his studs found the leg of the onrushing Moussa Dembele. It looked much worse than it actually was, and there was never any intent, but Friend saw fit to send Spearing packing.

Kenny Dalglish brought on Dirk Kuyt and Stewart Downing shortly after, and the move very nearly paid off ten minutes later when Downing saw a twenty-yard effort tip onto the post by Schwarzer. Liverpool were punished almost straight away, as Danny Murphy's shot at the near post was uncharacteristically spilled by Pepe Reina and pushed home by Clint Dempsey. Huff and puff with nothing to show once again, and Fulham came away with all three points.

There's plenty of questions to answer after this one, and while it's not anything to lose your mind over, it's certainly curious that Dalglish and company saw fit to relegate Dirk Kuyt and, more questionably, Maxi to the bench after both were involved in last season's drubbing. The choice to go with Andy Carroll against two lumbering center-backs, ostensibly in an effort to match physicality, proved to render Carroll anonymous and negate any sort of consistent fluidity in the Liverpool attack.

Having a bad taste in my mouth about the result and the way things went tonight makes it especially tough to single out anybody on the positive end; I thought Pepe Reina was solid and read the match well prior to spilling Danny Murphy's shot, and the back line was once again mostly impressive. Jay Spearing had spells where he looked very good (and some where he looked equally not so good), and Jordan Henderson was phenomenal for the stretch that saw him occupy space through the center part of the midfield. 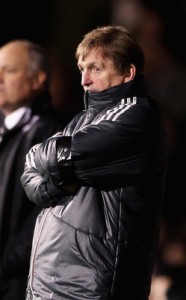 And while it certainly wasn't for lack of trying, Andy Carroll will once again come under fire for not getting on the score sheet. With he and Suarez both in the eleven it's a guarantee that the one who cost more will get most of the criticism, even though both (along with Craig Bellamy) put in maximum effort up top. Carroll's less flashy and decidedly less pleasing on the eye, which is a fair enough criticism, but it's not really his fault that he was once again put into a position where success wasn't necessarily the most likely outcome. Which, in a roundabout way, is basically an admission that he shouldn't be in the eleven. Not a positive enough impact right now, and the consistent forcing of him into a situation that just isn't working doesn't help anyone.

It's easy to feel pissed off after today's loss, and Kevin Friend is the go-to hate figure for those looking to project the result outward. The sending off was the flashpoint, and a litany of ignored fouls on Suarez didn't help matters. But in the end, it all could have been negated if Liverpool had taken the chances they got, which is the all too familiar narrative of this season.

More painfully, Friend's incompetence might not have been highlighted had Liverpool's approach not been so spectacularly wrong. The loss of Lucas made selection difficult, but the demolition in May was all about movement, which hasn't been a strong suit of an eleven with Andy Carroll involved. With the addition of Phillippe Senderos to the back line to accompany Brede Hangeland, who was terrorized by Luis Suarez last time out, it seemed tailor-made for a similar eleven to the one that got the win at Stamford Bridge in league two weeks ago. Also, Maxi.

The one bright spot is that we won't have to wait too long for Liverpool to get back in action, as they host QPR in five days. While we're not quite to "must-win" territory yet, the rest of December is going to be a pivotal stretch for the club. We know it's there, and when they get it right it's fantastic. Now it's just a matter of finding it on a consistent basis.