Liverpool 1, Blackburn 1: The Ghost of Christmas Past

Share All sharing options for: Liverpool 1, Blackburn 1: The Ghost of Christmas Past

Liverpool drop points again at Anfield, failing convert their late surge into a winning goal against a stubborn Blackburn Rovers side. The return of Steven Gerrard and two late chances got our hopes up, but in the end it was the same frustrating story we've seen from Liverpool so many times in the past year.

As it turned out, Kenny Dalglish had two returning players to choose from, with Jay Spearing's ban expired and Steven Gerrard cleared for inclusion late. So while it was fantastic to see Gerrard back among the picking and on the bench, it was a little surprising that Jay Spearing was not only excluded from the eleven but omitted entirely, with Jordan Henderson and Charlie Adam again the preferred central midfield pairing. The back line stayed the same, and Maxi and Stewart Downing operated on the left and right flanks respectively while Andy Carroll came back into the starting lineup to partner Luis Suarez.

The opening minutes were mostly status quo, with Liverpool taking up most of the possession and searching for cracks in the Blackburn defense. Rovers weren't completely inept, though, and after an early Luis Suarez free kick went narrowly over, the visitors gradually got forward and caused a few nervy moments. Neither side had any really threatening efforts, though, as all of the chances for Suarez were wide of the target and Blackburn never found the final ball.

The action devolved from there, with an Andy Carroll shot from six yards the only notable effort to speak of. A brief scramble left the ball at the big man's feet, and his point-blank poke was saved well by Mark Bunn. Two good goal-scoring shouts were waved off by the linesman within five minutes---first when Carroll had the ball in the back of the net from a Suarez cross, and later as Maxi was tackled while streaking down the right side of the area. The latter was met with the most moans, as the Argentine looked to be level before breaking. 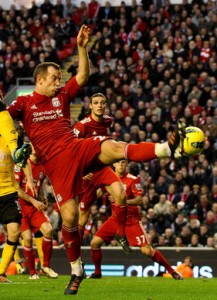 And just when it looked like Liverpool would enter the half frustrated at their failure to convert dominance into goals it got worse, with Charlie Adam deflecting a Morten Gamst Pedersen corner into his own goal, giving the guests the lead. It was a cheap corner to give away, with Daniel Agger lingering too long in possession, and completely against the way the half had gone. But given the lack of finishing that's plagued Liverpool, they deserved to be ahead just as much as the hosts.

The second half started much the same as the first, with Liverpool trying to force their way up the pitch and get back level. And in the 53rd minute they finally got the reward for their pressure, with Martin Skrtel delivering an inch-perfect cross to Maxi at the far post, whose perfectly-placed header beat Bunn easily.

The equalizer brought waves of relief along with renewed Liverpool pressure, and it seemed only a matter of time before the hosts took the lead. Luis Suarez' free header in the 58th was an immediate payoff, but from there Liverpool stumbled and stuttered their way forward.

Steven Gerrard's return lifted both spirits and the collective level of quality, and his free kick just after coming on nearly gave Liverpool their second. His sharp, curling effort found Maxi in a crowd of bodies, but the resulting header was far wide. The sentimental and practical boost, though, looked like it would be enough to get the hosts the edge they sorely needed.

Suarez again found himself with a chance on goal, this time in the 78th minute from a Glen Johnson cross. The header again fell wide, and Rovers countered quickly through David Dunn. Yakubu made life difficult, though, and Dunn fluffed his shot well clear of goal. It was one of the only pieces of end-to-end action of the entire second half, and it would only be followed by more Liverpool pressure. Straightaway at the other end Jose Enrique's floated cross was met by Andy Carroll in the middle of the box, and the headed effort was just inches wide.

The introduction of Craig Bellamy brought above another glimmer of hope, but a few late sparks never translated to a goal, and it was the same result we've seen so often at Anfield against "lower-level" opposition, even with two late chances saved impossibly, first by Mark Bunn from Andy Carroll's shot and then by 17 year-old Adam Henley on Daniel Agger's last second header. 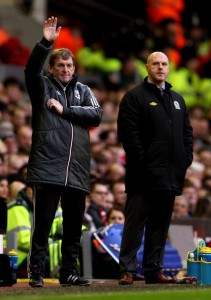 Dire home performance after dire home performance, and it somehow feels that, even with so much better at the club than it was a year ago, the football is still lagging behind. There's an argument to be made for better quality without the cohesion, but there isn't an argument that if Liverpool expect to be taken seriously, they need to pick up more than a point at Anfield on a regular basis.

It was a mixed bag individually, with little to pick out from a sloppy first half and a lot of smoke with no fire in the second. The back line was again very solid from right to left, and the lack of clean sheet says more about shitty luck than it does about a dip in performance. Jose Enrique continued to trend positively, rampaging down the left and again showing his defensive prowess whenever he was challenged.

Less impressive was Charlie Adam, even ignoring the own goal. He was again inconsistent and didn't add anything close to what we saw when partnered with Lucas. It's been a poor week for the Scottish midfielder, and with Steven Gerrard coming back into the squad, it might be time for him to take a rest.

Maxi again got his goal, and Stewart Downing looked much more positive, but it's the same old story for everyone in attack---the goals aren't coming. Martin Skrtel was responsible for the delivery on Maxi's leveler, and Luis Suarez and Andy Carroll, for the all the chances the were a shade off or just nicked away, aren't doing enough to win matches. Carroll was arguably the more productive of the pair, forcing Mark Bunn into three terrific saves. Craig Bellamy provided the same impetus he always does, and Gerrard's added class was a clear benefit.

It's impossible not to be frustrated and pissed off after today, and it's impossible to ignore that Liverpool clearly need to improve. They feel so close in so many different areas, but on days like today, the gap seems wider.

Hopefully you're all able to enjoy what's left of your Boxing Day---I'll be driving seven hours wheeee---and that Liverpool bounce back fresh and ready to go on Friday.