In a match in which the build-up was impossible to ignore, Liverpool once again work themselves into a corner, failing to create anything dangerous in a match that they ultimately looked lucky to get a point from. It's always the same story with this iteration of Liverpool---looking promising early, create a few clear-cut chances, and then piss it all away with dire football that isn't deserving of three points, let alone one.

The main talking point of the lead-in was whether or not Kenny Dalglish would be including the recently-banned Luis Suarez in his eleven, which, given the fact that the entire squad (including Suarez) warmed up in t-shirts with the Uruguayan's image, name, and number on them, became a no-brainer. As expected, Dirk Kuyt and Maxi Rodriguez came into the squad, with the latter starting the match just off Suarez in attack and the former opposite Stewart Downing on the flank.

And everything was all well and good for the opening twenty minutes, with Liverpool taking the lion's share of possession and doing plenty to make us forget about the misery off the pitch. They poured forward and dominated possession, coming close a number of times both from open play and from set pieces. Rare were the forays forward from the hosts, who often had ten behind the ball and were scrambling to avoid conceding. 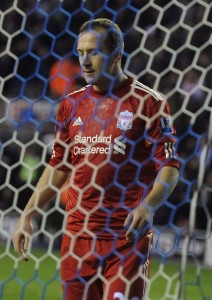 The more the hosts scrambled, the more Liverpool huffed and puffed, and while at one point it only looked a matter of time, the guests ran out of gas, settling into a less aggressive style of play that allowed Wigan back into the match. It was a terrific early effort from Roberto Martinez' squad, who looked overwhelmed but never panicked, and got confident play from Ali Al Habsi to stabilize a defense that was more than a little shaky.

A few Liverpool chances here and there marked the rest of the first half, the best of which was fired on goal by Dirk Kuyt and saved well by Al Habsi. Wigan tried from range but found no joy, and a Victor Moses end-to-end run caused Liverpool's defense all sorts of problems as the hosts piled on the pressure. Neither side found the breakthrough in what proved to be a very even first half, and one that had begun to look painfully familiar for Liverpool supporters.

The opening five minutes of the second half looked to change all that, first with a free kick in a dangerous area tipped over by Al Habsi from Suarez, and then from a penalty on Gary Caldwell after Suarez flicked one over his head with his back to goal. Charlie Adam stepped up and delivered a near-replica of Andy Carroll's effort at Chelsea, though, and from there Liverpool were on the way down. A quick succession of chances for Dirk Kuyt in the 67th and 68th minutes, first from a clever Adam free kick and then from a Suarez cross, rounded off most of Liverpool's threat on the day. Wigan tested on the break and looked comfortable, and were well deserving of at least a point on the day.

We can talk all we want about the encouraging signs and the potential in this squad and just how good they'd be if they could finish, but that does nothing to satisfy the desire to see them succeed right now. And the truth is, they're just not at the point we want or expect them to be at, which is among the league leaders that can put in consistent, match-winning performances week after week. That they're only two points off the fourth spot right now seems like a miracle, and it can only leave us shaking our heads and wondering what could be.

There's a number of things that went wrong tonight beyond the lack of cutting edge and missed penalty (the fourth of the season for Liverpool in five chances), and nearly all were culpable. They were most vulnerable on the break and through the midfield, where Wigan exposed far too much space in attacking a back line that looked out of sorts for the first time in weeks. It's not like there was any cohesion going forward either, with Luis Suarez on an island at times up front and little meaningful support provided after the opening surge. 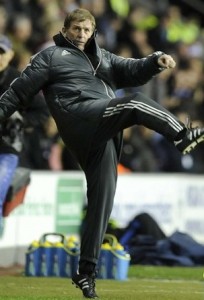 One of the only bright spots on the day was the resurgent performance of Jose Enrique, who gave Kenny Dalglish urgency going forward and a physical presence to break up anything Wigan tried to put together down their right flank. At times he was the only source of attacking impetus, and that he still proved capable defensively speaks to just how good he was on the day. The two young midfielders also looked decent enough, with Jordan Henderson again playing well centrally and Jonjo Shelvey contributing in attack after coming on in the 72nd minute. And while they weren't as solid as we've come to expect, it's another clean sheet for Pepe Reina and Liverpool's defense, who didn't receive any of the support that's been so useful in the past few weeks.

Beyond that it's hard to find many positives in a match that so desperately cried out for them. Like so many of you, I wanted badly for Luis Suarez to shine, and while he was impressive in fits and starts, he couldn't get anything together that stuck. Dirk Kuyt worked hard but failed to find a final product, and Maxi looked slightly off playing centrally. And it was another disappointing display from Stewart Downing, who was lacking pace and, aside from a couple driving runs sprinkled throughout the match, didn't have any lasting impact on the match. Same goes for Charlie Adam, who didn't offer much defensively and was lacking influence after a string of impressive displays.

So it's pretty much all negative, and at least for now, that's probably okay. There's not much time to dwell, with the unrelenting holiday calendar offering little time for navel-gazing. And at least it's the same old story---Liverpool need to be better and do it more more consistently.