Share All sharing options for: Liverpool 2, Aston Villa 0: Good Enough to be Boring

Like the reverse fixture last season, Liverpool barely get a fight from Aston Villa, easing to victory over an opposition that makes it hard to tell if they're that bad or if Liverpool were really that good. After the two early goals it settled into a match that wasn't exactly the most thrilling, but it was another stalwart defensive effort for Kenny Dalglish's squad that sees them go level on points with Arsenal in fifth. With the club in the middle of one of the busiest stretches of the campaign, regardless of how exciting it may or may not have been, it's an important victory.

Dalglish has remained fairly predictable in his selection so far this season, even when there's guesswork about the personnel that'll be included. And while today wasn't a complete departure from his usual picking, it was a bit of a surprise to see Jonjo Shelvey included along with Jordan Henderson and Charlie Adam. Shelvey's operated on the flanks at times, and while his positioning was fluid throughout the match, a start for him meant that the set-up would look slightly different. Craig Bellamy and Stewart Downing took up the flanks with Shelvey more central, and Charlie Adam and Jordan Henderson sunk deeper in midfield while resuming the partnership they took up last weekend against QPR.

The slight change saw Liverpool operate a bit more cautiously early, waiting to hit on the counter with Luis Suarez breaking off the last Villa defenders. Possession for the guests led to a quick cut-in and shot on the right from Downing, with the hosts getting a free header for Emile Heskey that was straight at Pepe Reina and ultimately whistled offside. 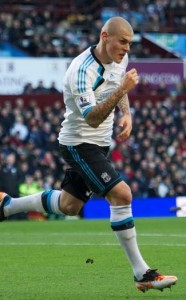 Action back at the other end gave Liverpool their first corner of the match, and after their display from set pieces last weekend, you'd have been forgiven for bemoaning anything that didn't come from open play. But a clever backheeled flick by Jonjo Shelvey from Downing's corner found its way to Suarez, who tried a backheel of his own from a few yards out. Brad Guzan got down well to save, but the rebound went straight to Craig Bellamy, who made no mistake in firing home for the opener.

And four minutes later they had another corner and another goal, only this time it was more straightforward. Bellamy's inswinging effort met Martin Skrtel's forehead perfectly, and the on-form defender guided it past Guzan at the far post. It was almost surreal to see Liverpool convert two consecutive corners after last week's struggles, and a painfully familiar site to watch a defender lose his man, only to watch him score seconds later. Thankfully this time it was the opposition's error, as Richard Dunne and Alan Hutton both conspired to leave Skrtel free.

Villa had their best spell of the match after Liverpool's second but still couldn't put anything together other than speculative shots from distance, and it was all very comfortable for the visitors. It was almost even more comfortable within a minute of the restart, with Craig Bellamy's streaking run and left-footed cross finding Daniel Agger free at the far post. The resulting header was nowhere near goal, but it was the start of a second half that would see Liverpool continue their profligacy in front of goal.

Minutes later it was Luis Suarez missing a chance after winning back possession from Richard Dunne. The Uruguayan turned and twisted to free himself and blasted on goal from within ten yards, only to see his shot crash back off the crossbar. And just outside of ten minutes it was the same story, only more impressive---his chip over Guzan seemed destined for the side netting, but as it soared over the keeper it drifted to the far post, and ended up ricocheting off and bouncing back across the face of goal. Frustrating but brilliant, and one of the last moments of the match worth talking about.

It wasn't a day that saw flashy performances from any of the principals; Luis Suarez hitting the post twice with creative and audacious efforts was about as sexy as this one got. The not taking chances narrative is furthered, and there was a bit of blasé about the match that didn't demand much interest. And yet it's a deserved, comfortable win, and it's three points more for Liverpool to stay on the fringes of a crowded top four. 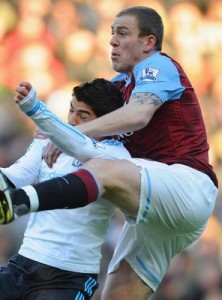 Those who impressed most on the day did so by doing exactly what was expected of them---the back four harried and hassled Villa every time they worked their way forward, with Glen Johnson emerging as one of the best on the day. Skrtel got his goal and we got a taste of Daniel Agger supplementing attack, and Jose Enrique seemed far more stable than he'd been over the past few weeks.

Up front it was more of the same from Craig Bellamy and Luis Suarez, with the former getting his goal and working tirelessly for the team, and the latter showing glimpses of sheer genius to go along with the frustrating inconsistencies he's been prone to after his purple patch to start the season ended. It's not a matter of "if" with him, though, and when he finds the final product he's going to be a nightmare. It's cliché as hell, but he's the only one that can truly stop him right now.

The start for Jonjo Shelvey proved justified, as he was confident and composed from an advanced position in central midfield. Charlie Adam and Jordan Henderson took a step back after their impressive combination last weekend, with Adam reverting to some of his early season habits both in possession and in the tackle. Stewart Downing was decent if a little subdued, fading as the match wore on in front of a home crowd that was happy to remind him of their displeasure at his exit.

So while we didn't get the comprehensive drubbing we've all been waiting for, we still got a dominant, comfortable victory on the road, and a key three points in Liverpool's crowded month. We had almost the exact same thing to say last weekend---despite the frustrations, it's the three points that matter, and that was never in question today.