Fernando Torres to Liverpool is a Thing People are Talking About

Share All sharing options for: Fernando Torres to Liverpool is a Thing People are Talking About

Like so much surrounding Fernando Torres in the past eighteen months, the sudden Twitter explosion about his possible return to Liverpool doesn't make much sense. A seemingly baseless rumor about his current club's willingness to sell for £30million less than he was purchased for eleven months ago, and all of a sudden there's legitimate-seeming people having legitimate-seeming conversations about the likelihood that Liverpool would make a move for him. Proving that, once and for all, we need to stop drinking so much.

It was sort of a strange thing that happened once the Daily Mail reported that Chelsea would be willing to sell Torres in the January window, in that everyone apparently forgot that other clubs exist. It wasn't just that Chelsea might be thinking about considering the idea of an opium dream that Neil Ashton had, it was that Fernando Torres was leaving London and he had to be coming back to Liverpool because he never really stopped loving them and how good would he be with Luis Suarez and does anyone know how to get burn marks off of ClimaCool?

Which isn't meant to entirely trivialize the sentiment that comes along with the idea of Torres back in a Liverpool shirt, because even the most butthurt of us has to acknowledge that the love affair between player and club was something special. Hindsight can trick us into believing that it was never that great, but myriad YouTube compilations, public proclamations of undying love, and the four jerseys you have stuffed in a bin in the closet tell us otherwise. 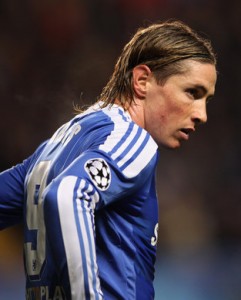 We can probably all acknowledge that there's a fair bit of romanticism involved here, and that as pejorative and condescending as we'd all like to be, there's a flicker in all of us when the topic comes up that's informed by past glories and endless what if's. If only he'd stayed, his partnership with Suarez would be unbeatable. He'd never be struggling the way he is now, lifted by the unconditional love of supporters and a natural mentor in Kenny Dalglish. And obviously Steven Gerrard's groin dong would be in pristine condition, buoyed by their magical link-up on a regular basis. Not that there's anything wrong with that.

There's really no reason for any of this to have traction other than the romance and the memories, though, and I'm not so sure that's good enough justification to go after anyone. The desire for a once-loved player to return makes sense emotionally, but in the real world, it doesn't do anything for the club's current troubles. Sentiment doesn't convert chances, even as much as we'd like to believe it.

One of the other main talking points to emerge since Neil Ashton and most of the Twitterverse experimented with mescaline is the idea that, at £20million, there's some sort of juking the stats to be done. All of a sudden bust of the century Andy Carroll only cost £5million, and we can retroactively explain why Liverpool spent so much money on the former Newcastle striker. Which is not really the most flattering argument for Liverpool or Carroll, who's not yet had the chance to rid himself of the fact that people with lots of money decided to spend some of it on him.

So to seriously argue that coming back to Liverpool is the best thing for the club or for Fernando Torres, or just because I could lift the ban on my wife wearing that jersey she really likes, is misguided at best. It's emotionally appealing but ultimately unfulfilling, as the joy we experienced during his first stint at the club---and even the glee we felt as Daniel Agger delivered a Danish special to his jaw---can't be taken back or duplicated. Both are painful in retrospect, but I doubt we'd take either of those things back.

In the end, Chelsea will probably end up selling Fernando Torres, whether it's this coming January, next summer, or five years from now. He could find his way back to the starting eleven for them and hit the goalscoring trail, or continue to languish in obscurity and find himself subject to ongoing rumors about discontent and failed potential. And if by some otherwordly influence they end up selling to Liverpool, there'll be a healthy amount of dissonance we'll have to deal with.

For now, though, we can chalk it up to bullshit and romance. At least before we slink off to YouTube.