Share All sharing options for: The Charlie Adam Curve

The past three league matches have seen Charlie Adam paired with three different midfield partners, with each new pairing leading to a slight shift in the focus of Adam's game. From a largely offensive effort when paired with Lucas against Manchester City through to a job as the deepest midfielder against Queens Park Rangers, it's meant an interesting—and surprisingly successful—progression. Thinking Adam offers any kind of long-term solution to the club's need for a top quality holding player in the new year may be more than a stretch, but that doesn't lessen the commendable manner in which the player buckled down and did his best at a job that doesn't seem a natural fit for his talents.

Of course, QPR wasn't the world's toughest opponent, and it's really only Liverpool's fault that they didn't cruise to the three or four goal victory their overall performance likely deserved. Given the level of competition, then, any pronouncement that Adam has suddenly become the complete midfielder might be a touch premature. Still, even if he's never likely to be as technically or positionally sound as Lucas, he's shown admirable flexibility and a willingness to at least attempt to adapt to a new role in recent weeks, more so than one might have expected given his time spent at Blackpool last season and the at times lazy defensive play seen early on with Liverpool.

And of course there's an obvious downside to deploying Adam as the most defensive of a midfield pair: Even if it works, as it did against QPR, it takes away from his ability to influence the game in attack as much as he might when alongside a more defensive-minded partner. However, even if it doesn't seem an ideal set up, at least one would hope that Adam being forced to take on greater defensive responsibility in the coming weeks might help Liverpool down the road, encouraging the player to develop a more rounded game that would benefit the squad when everyone is fit and available. 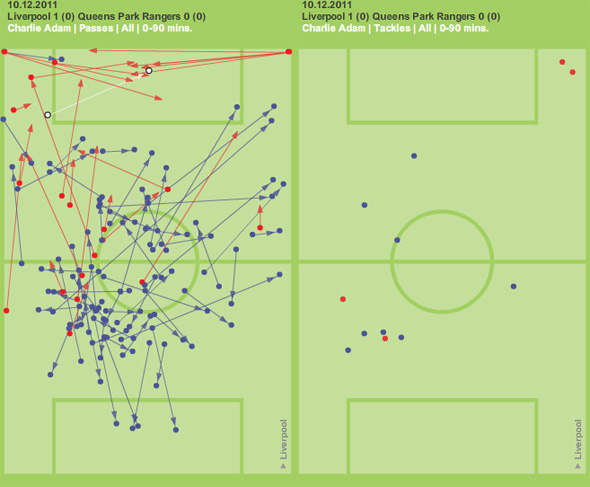 Against Queens Park Rangers, Adam's passing was 56 of 721 from open play, his 78% completion rate below the 80% mark that often signals his best performances. In his own half, however, he completed his safe, short passes at a very high rate as he attempted to keep play ticking over in a similar manner to the injured Lucas. However, with the player sitting noticeably deeper, the ratio of unsuccessful long balls compared to successful passes in the attacking half does increase compared to what was seen in earlier matches against Fulham and Manchester City.

On the defensive side, his eight successful defensive efforts on twelve attempts—including all tackles, ground challenges, and aerial challenges—represents one of his most robust defensive displays of the season. Considering QPR was one of the least attacking opponents Liverpool has faced, it's still a quite decent total, and with Jordan Henderson attempting only seven defensive challenges these numbers alongside his unusually deep and dense passing chalkboard do a good job of illustrating the unusually defensive job Adam found himself doing. 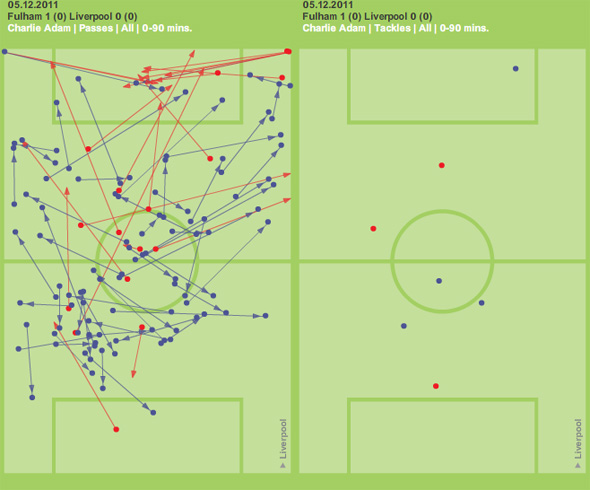 The week before again Fulham, Adam again managed to complete 78% of his passes from open play as he was successful on 47 of his 60 attempts. Compared to against QPR, though, the main point of interest has nothing to do with totals or success rates and everything to do with where those passes came from, as far more of them were made in the attacking half. There is also a shift to the left that can be seen, the player focusing more on one side of the pitch, while the dense cluster of short passes in the defensive end has thinned.

Managing to complete only 4 of 7 defensive challenges and tackles, meanwhile, also speaks to a player far less involved in the defensive side of the game. Also worth noting is that with only one of those attempts—a successful aerial duel just outside the centre circle—coming after Jay Spearing's sending off in the 72nd minute, the final twenty minutes when he wasn't paired with a more defensive-minded player don't appear to skew the results. 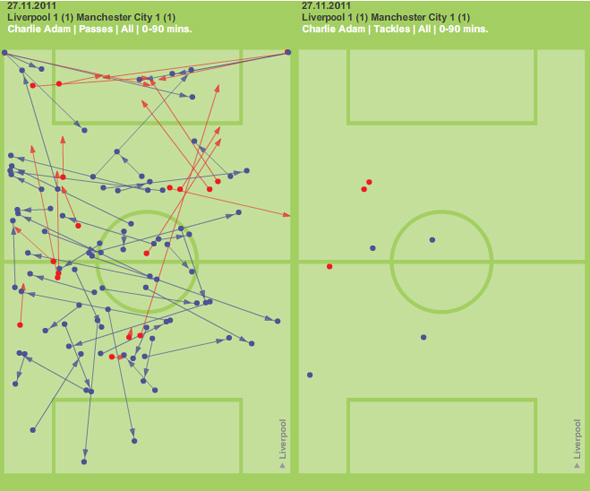 Finally, against Manchester City he was 43 of 58 for 74% in the passing game, and as against Fulham his passing is shaded further forward and towards the left side of the pitch—in fact, in this case that shift is even more pronounced then when he was later paired with Spearing. While the 74% completion rate, the lowest of the three matches, is nothing to feel especially positive about, at least the chalkboards make clear that most of those missed passes came further up the pitch. Of course conceding possession easily to a side like Manchester City is dangerous regardless of where it happens, but what is most interesting about it in comparison to the following two matches is how it reflects on the role Adam played alongside Lucas, because there is a clear progression to be seen when one considers both passing and tackling chalkboards for Adam against Manchester City with Lucas, then Fulham alongside Spearing, and finally QPR while paired with Henderson.

As for the tackling chalkboard, again against Manchester City he was 4 for 7 in the defensive side of the game, which compares poorly to him being 5 for 7 on challenges and tackles in only the defensive end against QPR. Context, and considering the relative attacking threat of the two opponents, hints at an even greater disparity between the numbers and how that difference speaks to the roles he played. Given that Lucas was eleven for eleven in challenges and tackles in the defensive end against a side as good as Manchester City speaks further to the gap between the two at that end of the pitch, too. Still, that reality shouldn't be used to condemn Adam for the commendable work he put in against QPR as the deepest midfielder, even if it's important to remember that as positive as that performance was—and as good as it was to see Adam putting in a more determined defensive shift—that side of the game is far from his specialty, even on a good day against a relatively weak side.

It will still be hard for many to watch Liverpool face off against Aston Villa and Wigan, their next two opponents, knowing that a poorly executed tackle or belatedly recognised threat could lead to the club dropping three points yet again against a side below them in the table—at least if the players at the other end of the pitch don't suddenly remember how to score a goal or three. Still, on the whole, the shift towards an increased defensive effort in recent weeks seems a reason to praise Adam, at the very least for his increased willingness and workrate. It also may offer cause for hope; hope that though it might not be the ideal use of his skills or bring an ideal balance to midfield, a few more performances like the one against QPR on Sunday might just be enough to make what's left of Liverpool's December run a successful one.

At least if those working higher up the pitch can manage to score a goal every now and then, of course.

1In all cases, blue represents a successful pass or tackle and red unsuccessful.