Liverpool play well for large spells and endure a late QPR surge to get the result they needed at Anfield, using the one chance they finished to get all three points. The result's obviously most important, particularly on the heels of the disappointment at Craven Cottage earlier in the week. But it was another performance marked by a frustrating lack of finishing, and ultimately another match in which Liverpool did most of the work for the opposition in making things much more difficult than they needed to be.

As it turned out, there wasn't a ton of mystery or intrigue in the team sheet Kenny Dalglish selected, with the same back four from the past three league matches resuming normal service, and Jordan Henderson straight-up partnering Charlie Adam in central midfield. The starts for Dirk Kuyt and Maxi were expected, as the former linked up top with Luis Suarez and the former took up the left flank with Stewart Downing, back in the side after sitting for most of the match against Fulham, on the right.

Liverpool spent much of the opening on the front foot without really creating anything dangerous; a slight knock to Maxi interrupted the forward flow for the hosts, which included a flurry of corners that led to nothing after a couple of blocked efforts. The pick of the early chances fell to Luis Suarez, who stood alone in the QPR box and headed Stewart Downing's cross straight at Radek Cerny. 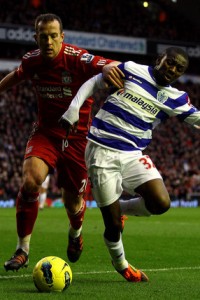 That was the first real action for third-choice QPR goalkeeper, and as we all predicted prior to the match, he'd go on to make a number of sparkling saves. Maxi, Kuyt, and Suarez linked up with increasing frequency---Kuyt played in Suarez on the right to no avial, then Maxi played in Suarez on the left, and finally Suarez sliced one across the face of goal that skipped past both Kuyt and Maxi at the far post. More fluid, and prettier to watch, but the same old lack of finishing marked each of Liverpool's attacks.

The only other clear cut chance of the half fell to Maxi, who was played in wonderfully by Kuyt. The Argentine was one-on-one with Cerny and tried to curl it past him, but the Czech keeper did well to react and tip it wide. A chipped effort from Luis Suarez ten minutes later was also saved by Cerny, rounding off the host's chances in a first half that proved fruitless despite a number of shots and two fair shots for penalties.

Thankfully the second half proved to be different enough almost immediately, with Luis Suarez getting the winner within two minutes. A quick Liverpool corner was cleared away, but Charlie Adam was able to maintain possession on the left flank. Rather than continuing forward, the midfielder cut back to his right foot and delivered an arrowed cross to Suarez, who, for the second time in the match, found himself alone in the middle of the QPR penalty area. This time he made no mistake, nodding past Cerny and getting his first league goal since the derby win at Everton.

The hope was that this was the first of many on the day---that one would open the floodgates, and Liverpool would purge their wasteful tendencies once and for all. But as has so often been the case, the rest of the match was marked by spurned chances (and paranormal goalkeeping by Cerny on Maxi) and an opposing side that sensed an opportunity to get back into the match. The introduction of DJ Campbell gave the guests the impetus, pressing higher up the pitch and causing concern at the back for the hosts. Liverpool's stern defense never broke, though, as QPR huffed and puffed but never created any clear chances to draw level.

It always feels petty to make any sort of serious complaints with a win, and with Liverpool's inability to do just that this season, especially at home, piles on the guilt. So I'll refrain from any prolonged bitching and just say that while there were many encouraging signs on the day, and the three points is all that matters, I still expect more from Liverpool---lack of finishing is the most blatant offense, but there were large spells in which Liverpool looked passive and lacking in urgency.

That's really the only collective worries, and there were some sparkling individual performances on the day that deserve more of our attention. Charlie Adam was the standout in midfield, showing tremendous growth from the player that most of us wanted benched during the early part of the season. He was more patient and composed, and showed tremendous positional sense as the deeper-lying of the central midfield duo. His delivery from set-pieces was less than spectacular, but the rest of his game was impressive enough to overshadow those struggles. And while he wasn't quite as good as Adam, Jordan Henderson again shined in a more central role, playing box-to-box and working his socks off.

Pairings at the front and back were similarly effective, with Martin Skrtel and Daniel Agger continuing their stout defensive form in the middle and anchoring an increasingly stingy defense. Maxi and Luis Suarez were the most effective link up front, with Kuyt playing the occasional foil and Stewart Downing producing one of his more positive displays of the season. Kuyt's inconsistencies were evident, though, likely a product of rust and irregular match action. The South American pairing were clearly the best, though, playing one-two's more than a few times and giving Liverpool two of the best looks at goal, even if they both spurned good goal-scoring opportunities.

As I said, there's little to nitpick about both as a squad and for the personnel involved---I think we'd all like to see Liverpool be more dominant and finish the chances they manage to create, and until that's the case they're always going to come under criticism. And when points are lost, it's more easily justified. But on days like today, when they struggle and frustrate and get the win anyway, I'm not in a mood to spend much time lamenting what could have been, when what actually happened was enough for a deserved victory.