Share All sharing options for: Pass and Move, the Swansea City Groove

On Saturday, Swansea's unheralded midfield trio of Mark Gower, Leon Britton, and Joe Allen overran their Liverpool counterparts, maintaining possession patiently and allowing Swansea to dominate for long stretches. They didn't, however, significantly outplay either of Liverpool's midfielders individually, with Lucas having the most effective passing game of any player on the pitch and Charlie Adam giving arguably his most controlled performance in a Liverpool shirt.

In fact, Adam's 80% pass success rate from open play represents, by far, one of his best passing games. He did make a number of poor long passes that went nowhere near their intended targets, handing possession straight back to a Swansea side eager to patiently build play from deep and with their three midfielders looking to stretch an outnumbered opponent, but on the whole he played a sensible game that placed a premium on ball retention. Still, facing a trio such as Swansea's was always going to be an uphill battle, and while Adam's generally composed performance placed next to Lucas' sensational 95% completion rate likely would have been good enough for the pair to win the midfield possession battle against a similar two-man midfield, it would have taken both of Liverpool's central players hitting on well over 90% of their passes to effectively starve Saturday's opposition.

It's a reality that many who follow Liverpool will be familiar with from European nights in the Champions League, where Liverpool's use of a three man midfield in Rafa Benitez' 4-2-3-1 was given a chance to shine, and on the weekend Swansea's midfield worked their advantage to perfection. They let the ball do the work, content in the knowledge that if they kept hold of it then at the very least Liverpool couldn't hurt them. Meanwhile, Liverpool's players were forced to chase and, eventually, tire, which contributed to Swansea's strong second half showing as Gower, Britton, and Allen began to pick out more advanced players with greater frequency and a handful of spectacular saves by Pepe Reina were required to keep things level.

On a much more basic level, it also mirrors the approach Barcelona and Spain have perfected in recent years: If the opponent has two midfielders, you bring three; and if they bring three, you drop a forward deep or winger narrow and beat them with four. Then you pass and wait, content in the knowledge that even if your side goes into the half level the endless movement will eventually tire the opposition and cracks will appear. Of course, Swansea City being able to effectively use such a strategy against Liverpool is a far different matter than any case involving the Iberian examples, and to a large degree it requires Liverpool to be complicit in their own destruction.

Adam may have been complicit in that he wasn't as controlled in his passing as Lucas. And certainly it didn't help that a player known to fade in the second half of matches was facing a side whose gameplan was built around tiring the opposition midfield and exploiting the resulting defensive weaknesses. But therein lies the real problem: Adam is known to be a player who fades as the match progresses, and he's known to be a less than stellar performer in defence. By most measures, Adam had a very good game on Saturday. If one honestly attempts to accept his shortcomings along with those things he does bring to the squad while hoping that the team will be set up in a manner to best cover for the former while utilising the latter, it's hard to fault him for how he played against Swansea.

The real problem was playing him in a situation where, if the opponent wasn't entirely starved of possession, Liverpool would have a hard time keeping up with that opponents' midfield. It was a game crying out either for a second Lucas in place of Adam to fight the opponent to a draw while giving Liverpool a numerical advantage somewhere else on the pitch, or it was a game where Liverpool needed a third midfielder to supplement Lucas and Adam, evening the fight. 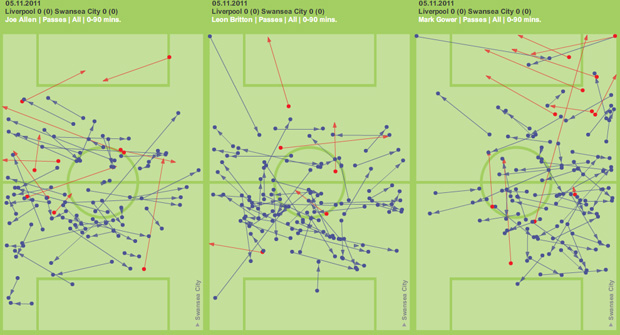 At times in the early going, it seemed that Jordan Henderson, tucked in on the right, might have been intended as a de facto third central midfielder, but the end result was that Glen Johnson was left largely exposed at fullback while Henderson wandered around—for lack of a better phrase—like a headless chicken. It was such an insecure performance from the youngster that Kenny Dalglish brought on Dirk Kuyt at the half, the earliest non-injury substitution Liverpool's manager has made this season. This certainly helped make Liverpool's right flank more cohesive, but if there was ever an intent to match up against Swansea's midfield trio it went out the window when the change was made—and the change was made right around when a side that dominates midfield possession would expect to take control of the match as their opponent began to tire.

The reality is that, a small handful of mistakes aside, Charlie Adam had a good game in possession. And the reality is that Lucas Leiva had one of his best passing days in a Liverpool shirt while getting forward more than he normally does. It would have been enough to thoroughly handle almost any two-man midfield the pair might have come up against, and with even a borderline competent showing by a third midfield player it would likely have been enough to thoroughly handle the Swansea trio they did come up against.

It can be easy at times to say that players need to do more, and it's probably fair to say that many Liverpool players indeed could have done more against Swansea. A more fundamental problem, however, was that the players weren't deployed in a way that gave them their best chance to succeed, and that's on the coaching staff.