Share All sharing options for: Liverpool 1, Manchester City 1: Almost There

Liverpool prove their mettle but were stifled by Manchester City and Joe Hart, as once again the hosts can't convert the chances that would have won them the match. This one's as much about Hart's impressive ability in goal as it is Liverpool's inability to find the net; both he and Pepe Reina kept their clubs in a match that was plenty entertaining. Points shared, but another enouraging and overall impressive display for Liverpool against a side that's been head and shoulders above nearly everyone else this season.

It was a somber start to the day for all involved, as news broke early that Gary Speed had died. The Welsh manager was renowned throughout the Premier League for his contributions to the game, and his tenure thus far as head man for the national side had seen vast improvements. By all accounts he was a well-liked and respected man, and for his life to end so suddenly was a shock. I can't pretend to be overly familiar with Speed as a player or as a manager, but I don't think that it takes an intimate connection with someone to feel saddened by their loss.

Reports began to leak out that Craig Bellamy would be out of the squad because of Speed's death, and this was confirmed shortly after the starting eleven was announced, with Kenny Dalglish stating that the club didn't give Bellamy the option to be involved, instead emphasizing the importance of space to grieve. His place in the lineup was never set in stone, but his absence meant a place opened up for the returns of Jordan Henderson and Stewart Downing, with Maxi also out of the eleven. The rest of the personnel remained the same, albeit in a slightly different shape than at Stamford Bridge.

For all of City's potential brilliance, the opening was fairly level, both sides testing in the final third. The visitors had the best chance of the opening minutes, as Yaya Toure got on the end of a scrambled corner but shot well wide of Pepe Reina's goal. Liverpool found their way forward in pieces, with Luis Suarez attempting to work through Vincent Kompany and Joleon Lescott, and Glen Johnson on an overlapping run spurred forward by Dirk Kuyt that ultimately proved futile. 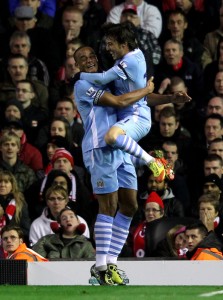 City gradually overtook the match, though, and Liverpool began to cut a nervous figure at both ends of the pitch. Jose Enrique's backpass to Pepe Reina was nearly intercepted by Sergio Aguero, and at the other end Liverpool proved to be unusually wasteful.

The guest's persistence paid off just after the half-hour mark as David Silva's corner was headed/shouldered back across the face of goal by Vincent Kompany, leaving Pepe Reina helpless. It was a deserved lead for City, who had taken the match over and looked the more likely side to take the lead. Surprisingly, though, that lead was short-lived, and along with the equalizer came an extended spell of Liverpool dominance.

Charlie Adam's shot from thirty yards was not the most dangerous effort, but it caused enough concern for Joleon Lescott that he felt the need to awkwardly stab a leg back out after drifted towards the left side of goal. He made just enough contact to redirect Adam's shot past Joe Hart, and all of a sudden Liverpool were back level within 90 seconds. They built off the emotional lift this provided, nearly taking the lead shortly after, only for Joe Hart to save Adam's right-footed shot from Luis Suarez' pullback.

A City push forward at the end of the half was a stark reminder of their danger, and they continued this into the second half. It was never really City's match again, though, and Liverpool had just as many chances as the opposition, failing to find a final ball or cutting edge after a number of scrambles in the City box.

It was all Liverpool for the final minutes, as Mario Balotelli's clumsy aerial challenge led to his second yellow and gave Liverpool the impetus to get forward in numbers. Andy Carroll's introduction provided the strength up top that had somewhat been lacking, and his header in the dying moments very well could have given Liverpool the win had it not been for Joe Hart, who was miles ahead of any other City player on the day in terms of influence. 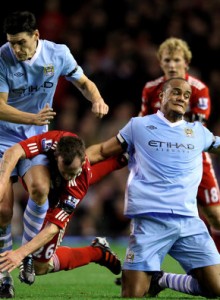 There's no doubt that either side could have taken all three points today, and leading up to the match you'd likely have jumped at the chance for a draw. But the way things finished---particularly with Andy Carroll providing something very positive in attack---it's hard not to be disappointed with the point. Yes, it's another frustrating home draw, but for whatever reason this one's feels much more positive than any other.

We can't have a conversation about the individual performances without pointing out just how good Lucas was. I'm sure the statistics will bare it out as well, but he was a monster, bossing the midfield and covering what seemed like every inch of the Anfield pitch all the while marking David Silva out of the match. He was certainly aided by another improved Charlie Adam performance, but the Brazilian midfielder was, aside from Joe Hart, the most impressive player on the day.

As mentioned, Adam was again better and created another goal, and Stewart Downing was solid in his return to the starting lineup. I don't know what he has to do to get involved on the scoresheet, but he found himself with a chance on goal a number of times. We got continued excellence at the back from Daniel Agger and Martin Skrtel, and Pepe Reina matched Hart at every opportunity. Luis Suarez had trouble getting a good look on goal, but he was his usual stormy self, causing problems at the back for City and running himself into the ground from the opening whistle.

There were continued struggles for Jose Enrique, though, as he was sloppier than usual and nearly gave City the opener with a poor backpass. Dirk Kuyt and Jordan Henderson weren't amazing either, and the latter had trouble early in the match showing any sort of influence. Bringing on Carroll for Kuyt proved to be the right move, as Carroll nearly gave Liverpool the win with his late header.

All in all, an exciting but disappointing draw, and another indication that Liverpool's expectations of getting back among the league leaders isn't just a pipe dream. Consistency's needed if that's going to be the case, but if they can put in more display's like today, it's certainly doable.