After a day spent eating food with enough butter to kill Lil' Sebastian, my Thanksgiving celebration has finally ended. On the plus side it means my late afternoon hangover's gone, but on the downside it means dealing with the repercussions of a meal I spent ridiculing my wife's aunt. Overall it was a push, at least until I realized Liverpool players need have a good attitude and that means you, Andy Carroll. Problem being, can I use a picture where he looks happy, or am I obliged by the laws of being a hack that any discussion involving "attitude" and "£35m man Andy Carroll" requires a picture in which he's supposed to look forlorn and destined for failure?

"At the end of the day it is hard for those who don't play. It is hard to keep them motivated and keep them going. That is understandable. If they come in with really good attitudes and not with petty lips when they are left out, it is helpful to everyone.

"For them to have come in with positive attitudes has shown their determination. It hasn't done anyone any harm. If they are not committed to playing, it is not going to be my problem, it is going to be their problem because we will go and get people who are determined to play."

Absent of clever placement about how much Liverpool's bench cost or how painfully British they were during Sunday's win at Stamford Bridge, there's really not much here to get in a twist about. Kenny Dalglish has a nice little habit of forcing journalists to connect the dots for themselves, and unfortunately that means we get plenty of controversy where otherwise there'd be none. And without going line-by-line through Tim Rich's usage of quotes from the above link and the official site's account of Dalglish's presser, it's fair to say that the narrative of Andy Carroll as a hard-drinking, unhappy, overpaid, poorly-coiffed has just gained another piece of evidence.

I won't lie that I'm curious to see how Carroll handles the sporadic playing time---I think he's had a solid run of form starting with the winner at Everton, but I'm also not clamoring for him to make an instant return to the eleven to avoid more talk of discontent. It's disappointing that, save for scoring a least two goals per match for the rest of the season, we won't be able to talk about Andy Carroll as anything other than a player who's not living up to expectation, because I'm still of the belief that there's something very positive in store for him at Liverpool.

But yeah, go ahead, explain how big of a bust he is and how I'm wrong for thinking that a 22 year-old might have some sort of future.

* We might be in agreement that something that doesn't have much of a future is plans for Steven Gerrard's return to action, as Dalglish threw water on our smoldering hopes for his groin dong in the same presser that he called Andy Carroll an apathetic pile of shit. Or something.

Anyhow, Dalglish deferred on a definitive return date for Gerrard when asked, which, if we're optimistic, is just the manager's default ambiguity when fielding questions he doesn't feel the need to answer. But if we take the pessimistic route, or just simply acknowledge the context in which Steven Gerrard's fitness exists, it's another indication that Liverpool might be unable to rely on their captain for the foreseeable future, which includes a very crowded December fixture list.

Not quite as interesting is the comment Dalglish makes about Joe Cole's future; the on-loan midfielder has continued to impress at Lille, and earlier in the week he'd been the subject of talk from the French club's president about a permanent move. Apparently Liverpool have heard little about the deal, but I'm not sure there's anyone actually expecting Cole to come back after his loan spell is up. Unless, you know, it's to do this.

* And lastly, one of the nicer moments from yesterday---that's not really news or anything, but it was likely better than spending the whole day with food and family and blahblahblah if you're in the US---was watching Lucas casually deflect criticism and comprehensively own one of the remaining doubters of his ability. It turned out to be devastating for the poor shirtless mope that decided to pipe up, as he likely didn't foresee the avalanche of derisory comments, some of which obviously went far beyond the line of good taste when the facts were more than enough to shame him.

Anyhow, it ended well for all involved, as Lucas once again comes off as one of Liverpool's more likeable squad members whilst confronting rampant douchebaggery, and Shirtless Joe McClellan channeled the embarrassment into positive action, finding himself a profile pic without nipples barren for all to see. 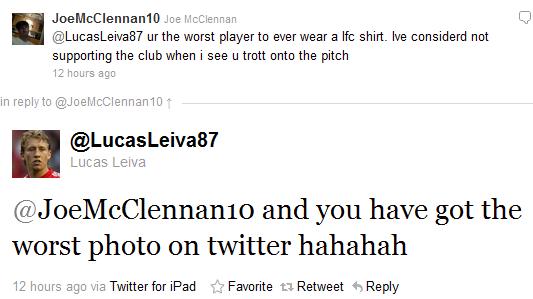 That'll do it for now, and we'll be back a bit later on with any news throughout the day. Until then, you can fondly remember your favorite holiday memories, which may or may not have involved you nestling your hand between a warm set of pillows: