Yesterday we broke down Liverpool's winning goal, and while the focus may have been on Glen Johnson's run from deep and his fantastic finishing of it, the team effort involved in the buildup was plain to see. It might be fair to say that most goals, if you dig deep enough, are team efforts, though often that effort can either be fairly self-evident or, conversely, hopelessly muddied. And if yesterday's winning goal leant itself to a bit of deconstruction, after a series of goals conceded in recent weeks that have also appeared to be team efforts—collective failings—it only seems right to provide a companion piece to that deconstruction of Glen Johnson's goal by examining the collection of individual failures on Liverpool's part that led to Daniel Sturridge's earlier equaliser.

Those earlier goals against that seemed, to varying degrees, to be team failings would be the last two goals scored by Liverpool's opponents before Sunday. First there was Kenwyne Jones, who scored for Stoke in the League Cup when Sebastian Coates let the ball bounce near the touchline, looking to shepherd it out of play but instead having his pocket picked by Jonathan Walters, leading to an immediate goal threat.

Initially there was a great deal of disappointment that Liverpool's young defender had made such a fundamental, basic error, though as the tendency to react in a knee-jerking fashion cooled—and as Liverpool went on to win the match—talk turned instead to it being a learning experience for a talented youngster starting his first match in a foreign land. And talk also turned to the role of Jamie Carragher in defending the goal, as Liverpool's veteran defender seemed torn between guarding the central areas and charging out to close down Walters, in the end managing to do neither especially well before diving in completely the wrong direction to allow Jones a free header on goal at a time when Coates had recovered from his earlier mistake and closed down Walters on the wing. The initial—and most glaring—mistake certainly belonged to Coates, but better decision-making from Carragher could have still stopped Stoke from scoring.

The week before had similarly seen a number of Liverpool players conspire to hand Norwich City a goal. This time the most glaring error for many was Pepe Reina's, as the Liverpool 'keeper went to intercept Anthony Pilkington's cross but found only air, leaving Grant Holt to head it home. Of course, Holt was Jamie Carragher's man, and had he been marked better Reina's wild flap may not have mattered. Without a man to mark and facing a Norwich on the break, Glen Johnson was also in the area, too, and instead of helping the situation his presence only seemed to contribute to a pileup of players in front of Liverpool's goal—from which only Norwich's Holt came out looking good.

Of course, as with the key error in the lead-in to Stoke's goal being Coates' initial one, it would be equally valid to point to an initial error by Charlie Adam against Norwich as being at the root of Holt's goal, with Reina, Carragher, and Johnson's keystone cops routine confirming the collective failure but not its root cause. Carrying the ball forward from midfield, Adam was indecisive, ignoring the easy pass to nearby teammates and scanning for a killer ball to play through. Instead of picking out that perfect pass, he ended up having his pocket picked, and it gave Norwich forty yards to run free at Liverpool's defense. Though at that point, that Steven Gerrard had charged out of midfield to join the attack, robbing that day's midfield duo of any balance, didn't help the cause either.

And as against those earlier opponents, against Chelsea it wasn't simply a case of Jose Enrique failing to mark Sturridge at the back post or of Charlie Adam failing to close down a charging Florent Malouda. It was, once again, a true team effort. 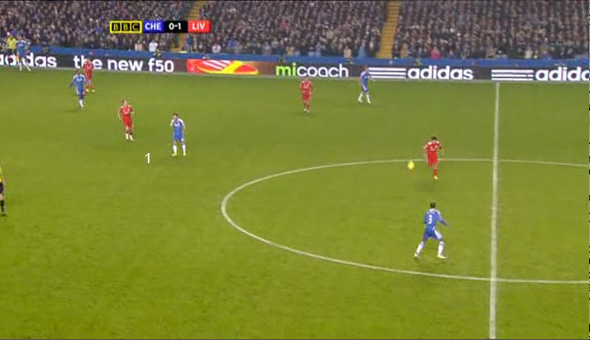 One: The stage is set for the goal in part by, as discussed earlier in the week by Zonal Marking, Lucas' responsibility in the second half being to man-mark Juan Mata (1) after Andre Villas-Boas brought Sturridge on to play the left and moved his creative force into a more central position. This largely prevents the Brazilian from acting as a screen for the defence, with his primary focus now tracking Mata instead of seeking to plug holes as they appear. 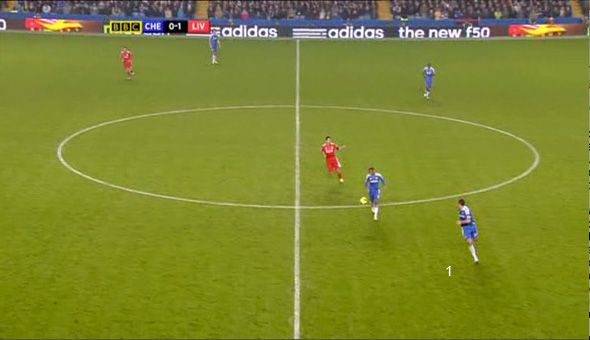 Two: As Ashley Cole receives a crossfield ball from David Luiz, centre back John Terry makes an overlapping run (1) that adds to Liverpool's troubles when the normally reliable Dirk Kuyt soon after fails to track Terry, keeping half an eye on Cole and giving Chelsea a numerical advantage on their left. 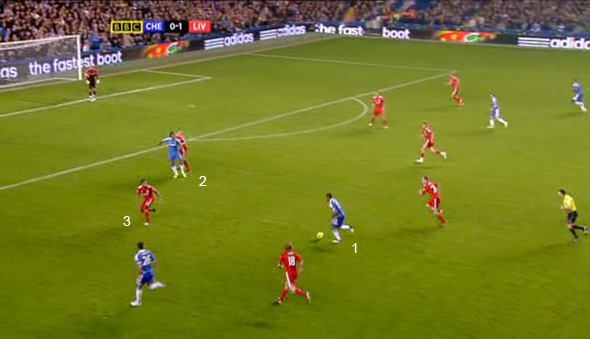 Three: Terry plays in Malouda (1) and continues his run, with Kuyt reacting too late. With Martin Skrtel doing his job to perfection and marking Didier Drogba tightly (2) this leaves Glen Johnson (3) a decision with no right answer. He does what he can, attempting to position himself to charge towards Terry should Malouda play it wide while remaining central enough to prevent a clear run at goal. 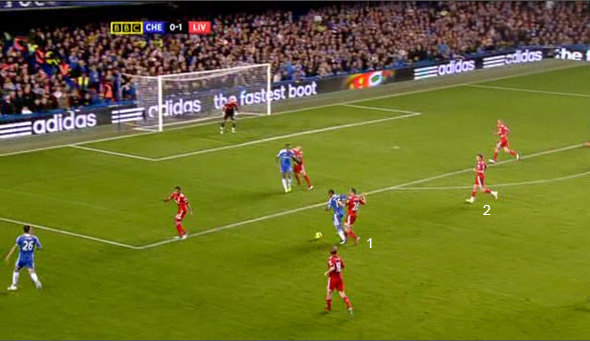 Four: With Adam closing down Malouda (1), Johnson turns more of his attention to the wider Terry. Meanwhile, Lucas (2) arrives late to the area because of his man-marking duties, leaving him in no position to effect the immediate play. 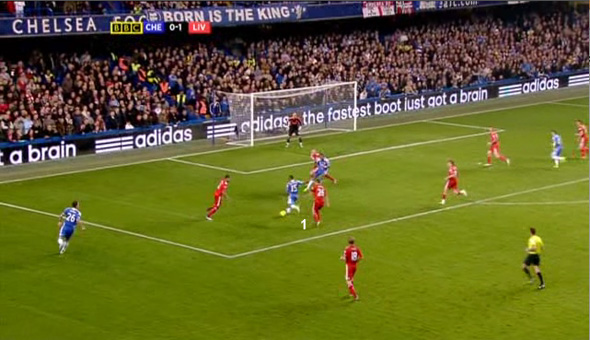 Five: Adam, however, pulls out of the challenge (1), which for a player not known for his tackling ability is an understandable and perhaps even defensible decision given the chance of giving away a penalty should he get it wrong. Given the angle, Malouda scoring still dosn't seem the most likely result, but a scuffed shot falls to Sturridge at the back post with Jose Enrique caught unaware.

So what went wrong? In the end, just about everything. Enrique didn't expect the unintentional low cross that came in and so allowed Sturridge to get past him. Charlie Adam's propensity for poor tackles led to him pulling out when Malouda got the the edge of the area. Johnson would likely have been better served shifting his attention to Malouda once the Chelsea player neared the edge of the area and John Terry was no longer in a position where he would be an immediate threat should he receive the ball. And meanwhile, Dirk Kuyt should have done a better job tracking Terry so that Johnson wasn't left with that split-second decision.

About the only player directly involved in the defensive effort who comes out of things looking good is Martin Skrtel, while Lucas and Daniel Agger where in more central positions bypassed in the initial buildup and eventual goal. In any case an impressive team effort, one in which if any of Adam, Johnson, Enrique, or Kuyt had made a better decision there would have likely been no Chelsea goal in the end. Though of course, later in the second half Kuyt, Adam, and Johnson would all go on to redeem themselves by playing hugely important roles in Liverpool's winning goal.