Dirk Kuyt draws Ashley Cole inside to cover for John Terry. Glen Johnson's run from deep catches Florent Malouda unaware. And Liverpool recover from a long stretch where they were outplayed by Chelsea to win for the second time in a row at Stamford Bridge under Kenny Dalglish. For some, Johnson's composure in the box and skilful, left-footed finish might seem one more reason to deploy the attacking fullback higher up the pitch. Yet if Johnson had started higher up the pitch against Chelsea, it would have fallen to him and not Dirk Kuyt to move inside to support possession—or, if he instead had remained wide on the right, it would have left him tightly marked and unable to make the run that he did. 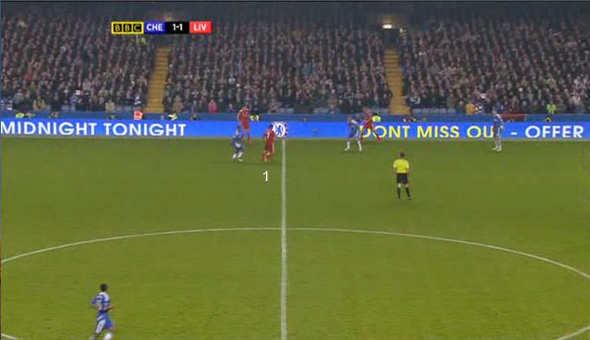 One: Luis Suarez (1) drops into midfield, linking up with Stewart Downing and Jose Enrique on the left, dragging Chelsea's defence and midfield up and to their right to cover the space deserted by the striker. 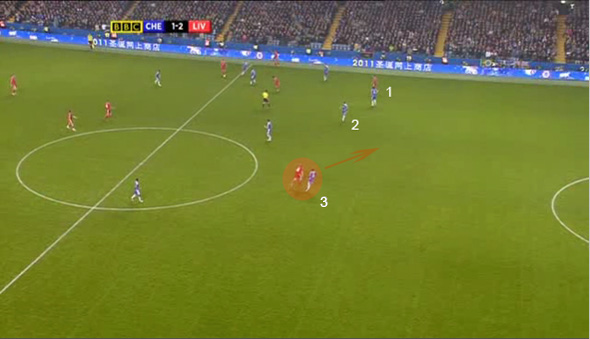 Two: Both Suarez and Henderson (1), playing in the old Gerrard free role behind Suarez, are far to the left, involved or available in Liverpool's short passing game. With David Luiz marking Henderson tightly, it forces Chelsea's left centre back John Terry (2) to move to his right of the centre circle to prevent a massive hole for Suarez or another Liverpool player to be played through. This means that when Kuyt (3) makes a late run to fill the space vacated earlier by Luis Suarez, Ashley Cole has no choice but to follow him inside. 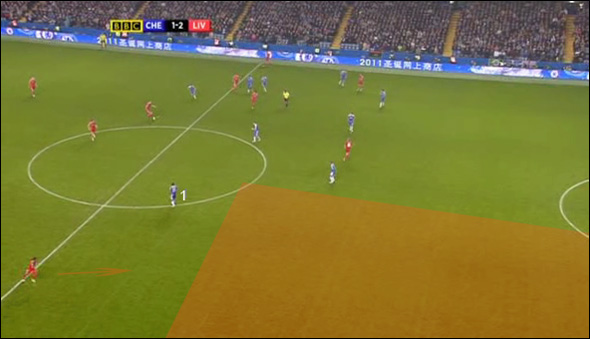 Three: The end result is Chelsea only have one player defending their left side in Florent Malouda (1), and while he watches the buildup play, Glen Johnson begins a run from 20 yards deep in Liverpool's end. With the fullback in full flight and with acres of space ahead of him, Charlie Adam is able to easily switch play to the open wing.

Johnson still had plenty to do, and the way he slickly skipped past Malouda and a recovering Cole to win Liverpool the match was an impressive display of individual skill, but the run in its entirety and the buildup play it relied upon—and not just that fantastic finish—embodied the value of playing with an offensively gifted, attacking fullback.

Moving Johnson up the pitch while putting a less adventurous fullback in his place only removes a potential outlet in attack and hinders Johnson's ability to do what he does best in the final third—namely, running at defenders with a full head of speed. Moving a player like Johnson into the attack only serves to make a side's overall balance more defensive, and it removes the possibility of a run like the one that won Liverpool the match at Stamford Bridge on Sunday. It was the sort of run that's bread and butter for Dani Alves with both Barcelona and Brazil, and nobody suggests either side would be improved by him being moved to the wing—in part because on the few occasions it's been tried it limited the best aspects of his game in attack and made the entire side look worse, not only lessening the attacking threat from right back but also from Alves in the more advanced role.

Thinking that Liverpool, despite having the best defensive record in the league this season, needs a more solid defensive presence at right back might be one thing. Thinking that moving Johnson into the attack would solve any problems and not just create a new set of them is an entirely different matter, and an idea that has never made a great deal of sense given the player's skill-set. One would hope that Sunday's striking example of exactly what an offensively gifted fullback brings to a side when he's played in his proper position will put an end to such lingering nonsense once and for all. It probably won't.