Liverpool 2, Chelsea 1: Back in Form for the Big Occasion

Share All sharing options for: Liverpool 2, Chelsea 1: Back in Form for the Big Occasion

Liverpool come away with a deserved win in a tense affair at Stamford Bridge, extending their winning streak over the London club to three. The sides traded spells of dominance, with Liverpool much better for the opening forty-five, and Chelsea maintaining the upper hand for most of the second. In the end, though, the visitors got the one they needed, and continued their terrific form against sides near the top of the table.

For weeks we'd talked about shaking things up in the starting eleven, a conversation that typically involved including Craig Bellamy, Maxi, and Dirk Kuyt in the lineup, as each seemed like they had more to give. So when the team sheet was released it was a bit surreal to see all three included up front in support of Luis Suarez, with Stewart Downing, Andy Carroll, and Jordan Henderson on the bench to start. It was similarly surprising to see Jamie Carragher left out despite his return to fitness, as Dalglish opted to stick with the emerging partnership between Martin Skrtel and Daniel Agger. No shock in the rest of the squad, as Glen Johnson and Jose Enrique kept their spots at full-back and Lucas and Charlie Adam partnered in central midfield.

Further surprises were in store, though, as Liverpool came out pressing high and putting Chelsea under pressure whenever they were in possession. That fluid, energetic front four led the way, with Luis Suarez playing Maxi in behind John Terry and David Luiz twice in the first ten minutes. Any concerns about Liverpool getting overrun in the midfield were quickly assuaged, as the collective work rate without the ball was superb.

Chelsea still got a couple of early chances, first at the far post for Juan Mata, whose volley skidded across the face of goal, and minutes later Jon Obi Mikel fired over from distance. It was largely Liverpool's match, though, with Bellamy setting the pace in attack, darting across the forward areas and nearly creating for Suarez after a neat overlap with Glen Johnson. The right-back was influential as well, working with Kuyt and Bellamy to get forward on a number of occasions, the most dangerous of which led to a Liverpool corner in the 14th minute after Johnson found his way through the Chelsea defense. 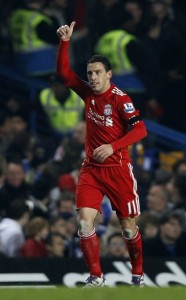 The sides continued to trade chances, with Didier Drogba narrowly missing on a free kick in the 21st minute that plenty of us thought was in, and Liverpool wasting two different breaks, first when they had four on two with Suarez in leading the charge, and later when Dirk Kuyt fed Suarez after winning back possession, only to see the Uruguayan misplay a pass to Maxi.

The opener finally came in the 33rd minute, as Charlie Adam did well to dispossess a doddling Mikel just outside the Chelsea area. He quickly fed Craig Bellamy, who one-two'd his way with Luis Suarez past John Terry, and coolly fed a streaking Maxi down the left, who produced a carbon-copy finish from his late-season heroics from earlier this year. It was a beautiful move from start to finish, with Adam putting in a perfect challenge, and all parties involved avoiding the sort of panic that could have seen the chance ruined.

Liverpool continued to press for the rest of the first half, but after the break the script changed quickly. The introduction of Daniel Sturridge changed the complexion of Chelsea's attack, and Liverpool found themselves on the back foot. The host's pressure paid off in the 55th, with Florent Malouda waltzing through a passive Liverpool defense and blasting a shot that curled across the face of Pepe Reina's goal. Sturridge was waiting just beyond Juan Mata, and he heeled one back across Reina for the leveler.

The nerves and tension obviously got worse from there, as Chelsea had the better of the chances and nearly took the lead two minutes after equalizing from Didier Drogba's free kick. Branislav Ivanovic's flicked header was saved spectacularly by Reina, though, and things gradually wore down to the point that the match seemed destined for a draw. Jordan Henderson's introduction brought energy for Liverpool, and the appearances for Fernando Torres and Raul Meireles were a nice nostalgic bit of awful, but there was nothing much to speak of until Liverpool got their winner.

A cross-field ball from Charlie Adam found Glen Johnson in stride down the right, and the former Chelsea man fooled Ashley Cole on the edge of the area and worked his way towards the center. One more good move freed him up jut a few yards from goal, and his curling left-footed shot got past Petr Cech and John Terry at the far post. It was another terrific goal, and it had to be something special for Johnson, who we'd all forgotten about as we furthered the threat of a former player scoring the winner against his old club. 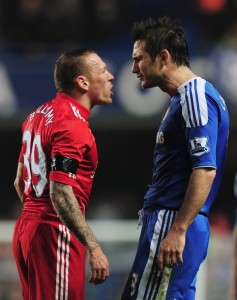 It'd be hard to overstate just how great it felt to see Liverpool win this one---for all the storylines and struggles, they were at their best today, taking the lead on an excellent team goal and fighting back after they could have seen the match pass them by. It's impossible to ignore the similarities to last season's win; Kenny Dalglish and Steve Clarke came in with a clear gameplan in mind, and while it might have been frightening at times, they put Liverpool in a great spot to win.

The use of Craig Bellamy, Maxi, and, to a lesser extent, Dirk Kuyt proved to be a big part of that plan, as they were active early and set the tone for an aggressive first half approach that allowed for Liverpool to enter the break feeling fairly comfortable. Bellamy was everything we've hoped for and more, both in spirit and in action, and Maxi continued his hot streak in front of goal despite making only his first league start of the season. It wasn't the type of performance we're used to seeing from Kuyt, but he was his usual hard-working self despite lacking influence for large spells. Luis Suarez was similarly ineffectual at times and uncharacteristically wasteful in the passing game, but he had his usual moments of magic and was vital in the opener.

Outside of the stalwart defensive efforts from Martin Skrtel (who was almost faultless at the back), Daniel Agger, and Pepe Reina, Liverpool's best on the day had to be Charlie Adam. He was finally a presence alongside Lucas, and supplemented his usual excellence in distribution (which led to the winner) with a terrific display defensively. His firm challenge on Jon Obi Mikel started the move for the opener, and overall he worked his socks off in defense and finally provided a glimpse of an all-around midfielder. That Lucas was mostly at his own best probably didn't hurt things, but for the first time this season I found myself glad he was included. Jordan Henderson put in another good shift after replacing Craig Bellamy, jinking forward and creating a chance for Kuyt and bringing boundless energy to the cause.

The few negatives on the day are barely worth discussing; as mentioned, Kuyt and Suarez had their struggles, Jose Enrique finally looked human, and Glen Johnson had a torrid second half in defense before the bit of magic that gave Liverpool all three points. Nothing hugely damaging for anyone, and hopefully all small bumps that are remedied prior to next week's match with City.

But days like today are mostly useful for reminding us how absolutely wonderful supporting Liverpool can be, and it's a terrific---if not frustrating---reminder of the potential in this squad. Questions will rightly come in about why they can't do this against everybody else (including at home against Norwich, Swansea, et al.), and there's time for that.

That time can be later can be later, though, because right now, this one's pretty fantastic.