Liverpool win comfortably in a match that was only made difficult by their own doing, as they scored twice and eased to victory despite failing to convert a handful of chances that would have made the scoreline more reflective of the performance. West Brom scarcely threatened, and nearly to a man Liverpool were terrific, with most of the eleven justifying their inclusion on a day that saw two mainstays ruled out through injury. If they're going to be challenging for a European spot at season's end, victories like today's are ones they'll need to start racking up.

The late news about Steven Gerrard's omission was the big talk of the pre-match, with the captain apparently suffering an ankle knock in training that somehow turned into an infection. Jamie Carragher's absence was less surprising, as he was subbed off at half during the Stoke match. But combined it meant the squad were without their captain and vice-captain, leaving Pepe Reina as the deputy, and Martin Skrtel joining Daniel Agger in central defense. As expected, Glen Johnson and Jose Enrique made their returns, Lucas and Charlie Adam once again paired in the midfield, Jordan Henderson and Stewart Downing filled the flanks, and Luis Suarez and Andy Carroll rounded off the 4-2-2-2 up top.

And nearly from the start they were on the front foot, with Enrique playing a forty-yard diagonal ball to a streaking Suarez, with only a poor touch from the Uruguayan to blame for not taking a lead within a minute. Suarez was again involved a minute later, cutting back for Adam on the edge of the area, but the right-footed effort headed deep into the home stand. A scramble in the Liverpool box after a Chris Brunt free kick gave the hosts respite, but it proved to be short-lived as the the visitors notched the opener on their next trip down the pitch. 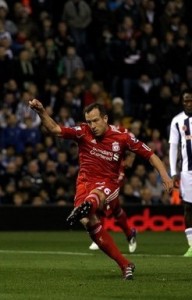 Possession from Luis Suarez in the West Brom penalty area looked to be fruitless, with few obvious openings. As Suarez dribbling away from Ben Foster's goal, though, Jerome Thomas put a clumsy foot forward and knocked the Liverpool man to the ground. Lee Mason didn't initially blow for a penalty, but his linesman on the far side judged it to be more than enough contact, and the penalty was given, with Suarez cast as the villain once again by opposition supporters despite his clear efforts to stay upright. Regardless, Charlie Adam coolly slotted home the spot kick, sending Foster the wrong way and giving Liverpool an early lead.

From there it continued to be all Liverpool, as they found their way forward at will and did everything but find the second for the rest of the first half. Mason didn't do them any favors, ignoring a clear penalty first on Jonas Olsson, who bundled Andy Carroll to ground on a corner, and next on Steven Reid, whose bandaged hand batted away a Carroll header on goal after Luis Suarez floated a fantastic ball from the right flank.

Carroll finally got his reward for some excellent first half work, though, finishing off a breathtakingly efficient break from the guests after the hosts had nearly gotten an equalizer. It started in their own half with Lucas, who played a perfect fading ball to Suarez on the right flank. It would have been easy enough for him to shit out of the challenge with Youssuf Mulumbu closing quickly , but his inch-perfect pass was redirected by Suarez to Andy Carroll in the middle, and the forward found himself clear on goal. A long first touch almost saw the chance go begging, but Carroll expertly poked a left-footed effort past Foster to give Liverpool the second they needed on the stroke of half-time.

Two goals to the good, Liverpool lapsed for a short period to start the second but went on to see the match out with the lion's share of possession and a handful of chances again gone begging. It's a worrying trend for Kenny Dalglish's squad; even with the three points and a fairly comfortable display, the inability to take what's right in front of them is unavoidable. You've got to be happy with the result, and it's progress for a side that previously couldn't kind the killing stroke, but it's hard to shake the "should have had..." narrative.

What's far more encouraging was the play of Andy Carroll up front---he wasn't immune to the squad's collective struggles to take their chances, but he got the goal he deserved on a day when he was more active and effective than we've seen. The announcers couldn't give up the chance to discuss the shortcomings of the pairing with Luis Suarez even though the big man was on the end of two clear-cut chances created by his partner, and Carroll playing in not only Suarez but nearly all of Liverpool's front six at one time or another. 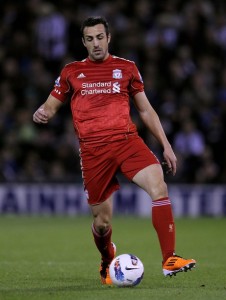 On any other day Carroll might have stood out more, but it truly was an impressive effort from the entire squad back to front. Pepe Reina was solid when called upon, and Martin Skrtel and Daniel Agger were fantastic in central defense, with the latter setting hearts alight with his runs forward and involvement in attack. Not likely that the partnership continues once Jamie Carragher is fit, and given Skrtel's inconsistent form that might be a good thing, but today they were excellent. Same goes for nearly all involved; Glen Johnson and Jose Enrique marshaled their flanks expertly as Enrique continued his unbelievable form, Lucas was at his dominant best in midfield, Jordan Henderson turned in another improved performance, and Luis Suarez was his usual self, creating both goals and a number of other chances.

The only question marks on the day were Charlie Adam and Stewart Downing, as the former showed flashes of brilliance interrupted by more than a few maddening moments, and the latter failed to exert any influence other than a shot that bounced back off the post in the 90th minute. For Adam it's about what we've come to expect---searching balls that opened West Brom up and confident play from the spot and set pieces, but over-exuberant first touches and forcing play when it generally wasn't available. And with Maxi, Craig Bellamy, and Dirk Kuyt waiting in the wings, there's little argument left for Stewart Downing's continued inclusion, as he failed to get involved and has regressed on either flank after starting the season so well.

At the end of the day, though, the positives far outweigh the negatives, and three points is a deserved return.