With a Quarter of the Season Done, Where Does Liverpool Stand?

Share All sharing options for: With a Quarter of the Season Done, Where Does Liverpool Stand?

With a quarter of the Premier League season wrapped up, the unavoidable reality is that Liverpool hasn't performed up to the level that many fans had hoped they would. They haven't seemed especially poor perhaps, but clearly they haven't hit the sorts of highs they did in the second half of 2010-11 that had fans talking about the squad being a few tweaks away from legitimate contenders after finishing out the season with the third best record—and very nearly the second best up until stumbling through their final two matches—in the league under Kenny Dalglish.

But if that's an unavoidable truth, so too is that they haven't played nearly as poorly as they did in the first half of the 2010-11 season under Roy Hodgson. Still, given that Hodgson's side had a negative goal differential to go along with a 35% win rate and on form was stuck in twelfth, that might not be setting the bar very high. More interesting is looking at Liverpool over the past three seasons (and managers) and seeing just where the current squad stacks up against recent Liverpool teams in key statistical categories.

First the pretty pictures, then a few observations to go along with them: 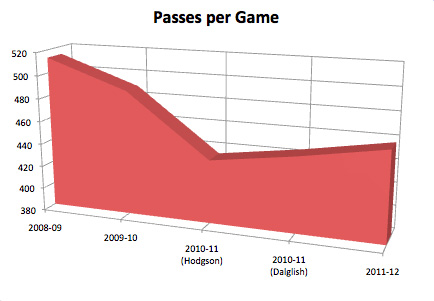 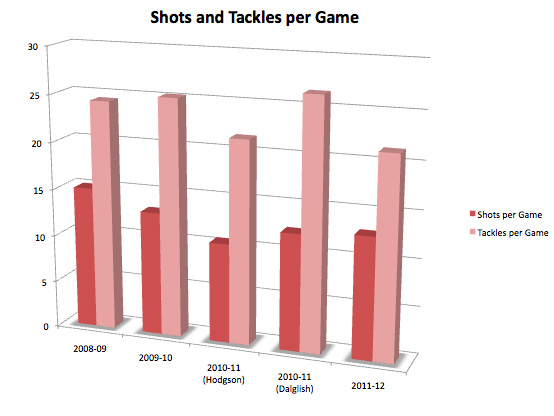 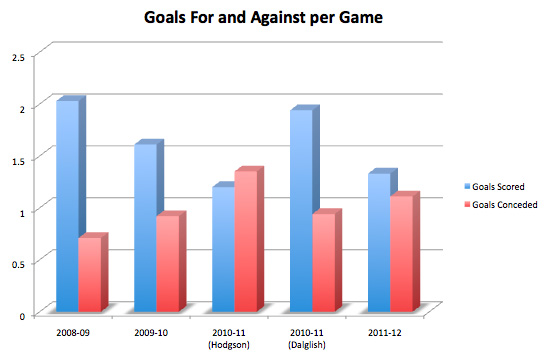 First, while it's no surprise that the Points per Game, Win Percentage, and Finish/Form graphs look similar, it's interesting in the way that each appears a magnification of the previous, as each extra tenth of the point per match over the season results in a significant boost in final position.

Meanwhile, shots and tackles don't always have an obvious correlation when it comes to success in the table, though that Roy Hodgson's time with the club saw both the second lowest number of attempted tackles (pipping Kenny Dalglish's current side by a sixth of a tackle) along with the fewest shots per game, fewest passes, and lowest point return speaks to his passive approach and—placed next to Liverpool's similar statistics in recent seasons—reflects just how poor a fit that approach was for the club.

Goals for and against both reflect overall success almost perfectly, and the differential makes things even more stark: In 2008-09 the club finished second after scoring 1.55 more goals per game than they conceded. In 2009-10 they scored 0.69 more goals than they conceded and finished seventh. Under Hodgson they conceded 0.15 more than they scored and were twelfth in the form table, while after Dalglish took over they scored an even goal more than they let in and rocketed to third in the form table. So far this season, they're only scoring 0.22 more goals than they let in, and so it's hardly surprising that they find themselves currently outside the top four—in fact, the only time in the past four seasons they've both scored fewer goals and conceded more of them per game was under Roy Hodgson. That they're at least creating the chances has been an oft discussed topic, but the number of goals this side is letting in is equally worrisome.

And finally, two things really stand out: The 2008-09 team was far, far better than many fans realised at the time, and after the heady hopes of the summer this year's squad seems a long ways away from matching its form. Perhaps a little surprising, though, is just how close Kenny Dalglish managed to take last season's threadbare squad to matching those heights. If you're a pessimist, that probably signals that more of an effort should have been made to supplement that squad instead of radically overhauling it. And if you're an optimist, well, Liverpool's always been a bit of a slow starter, and at least the first half of this season seems set to provide a better platform than the first half of the last one did.