If there's one thing most Liverpool fans would be able to agree on it's that left back Jose Enrique has exceeded expectations, and if the season were to end today he'd likely be named the club's player of the season. Still, it's been difficult to judge him objectively, at least from a strictly Liverpool perspective. After all, those who follow the club have had little first hand experience with top class left backs in quite some time—or at least ones who can stay fit for more than five minutes.

For new arrivals like Charlie Adam or Jordan Henderson it's fairly easy to find points of comparison, both statistically and intuitively. But that isn't the case with Enrique, who has looked superb for the club so far but for whom there is little by way of a useful baseline. Which leaves anybody wanting to judge whether Liverpool's new fullback is anywhere near as good as those watching seem to think he is—at least compared to the rest of the league's fullbacks—the rather difficult task of trying to work out quite where his numbers do line up when put next to every other club's starting left back this season. We'll try to do just that now, starting with the defensive side of things: 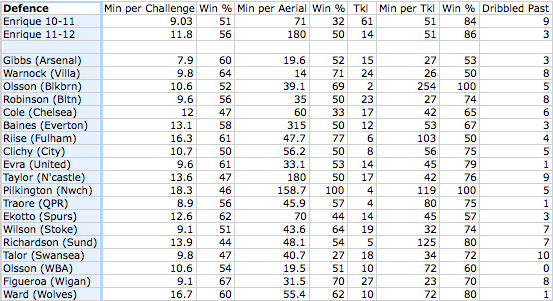 Minutes per X is slightly less useful when looking at fullbacks, who can really only rack up defensive statistics when the opponent attacks their area of the pitch, but they can at least be useful for weeding out outliers—like Leighton Baines only making an aerial challenge every three and a half games or Blackburn's Martin Olsson only making a tackle once every three starts, which rather puts a dent in his 100% success rate there. There's also Norwich's Anthony Pilkington, likely to start against Liverpool on Saturday, who has played roughly two-thirds of his club's season to date at left back and has been perfect in the air and when attempting a tackle—but he's only attempted four tackles.

When focusing on an ability to stop players beating the fullback on the ground by looking in particular at the dribbled past and tackle success rates for players who have made at least ten tackles, few in fact seem to be on the same level as Enrique so far this season. Ryan Taylor at Newcastle stands out for having a tackle rate in the same range as Enrique—but he's been dribbled past three times as often. Meanwhile Olsson at West Brom hasn't been beaten on the ground once, but he's won far fewer of tackles.

In the end, the only names that stand out alongside Enrique in these key defensive categories for a fullback are Wolves' Stephen Ward and Manchester United's Patrice Evra, a pair of players with the second and third highest tackle success rates behind Enrique but who have both been dribbled past only once to the three times Liverpool's player has been beaten on the ground. When it comes to the offensive side of things, however, neither Evra or Ward contribute anywhere near as much as Enrique has: 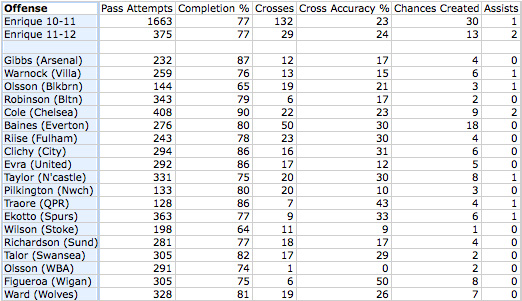 When looking at those offensive statistics, completion rate from open play—similar to an apparent weakness in the aerial game defensively—is the one area Enrique seems to trail in. Though when it comes to crossing and creating chances he again stands near the top of the league in the stats tables.

Former Liverpool left back John Arne Riise has a high number of successful crosses, but he hasn't managed to create many chances, while once again Jose Enrique's replacement at Newcastle puts in a strong showing that isn't quite up to the levels of the top providers in the league. Elsewhere, a number of those with high crossing accuracy are hurt by the fact that they've delivered relatively few crosses.

And so again here, Enrique is one of the standout names: Over twenty crosses, a respectable completion rate, plus the second most chances created amongst left backs and a pair of assists. Alongside him would seem to be the fairly obvious duo of Everton's Leighton Baines—with a league leading eighteen created chances—and Chelsea's Ashley Cole, who's created the third most chances, has delivered over twenty crosses, and been credited with a pair of assists.

The overall numbers may not suggest that Jose Enrique is the perfect fullback—at the least, he could do a little better maintaining possession and winning the ball aerially. Yet with him clearly amongst the league's top three in stopping his man at one end of the pitch and providing offensive opportunities at the other, it's hard to argue against the stats backing up the impression of most Liverpool fans: He's easily among the league's best fullbacks—and maybe even the league's best left back—so far this season.